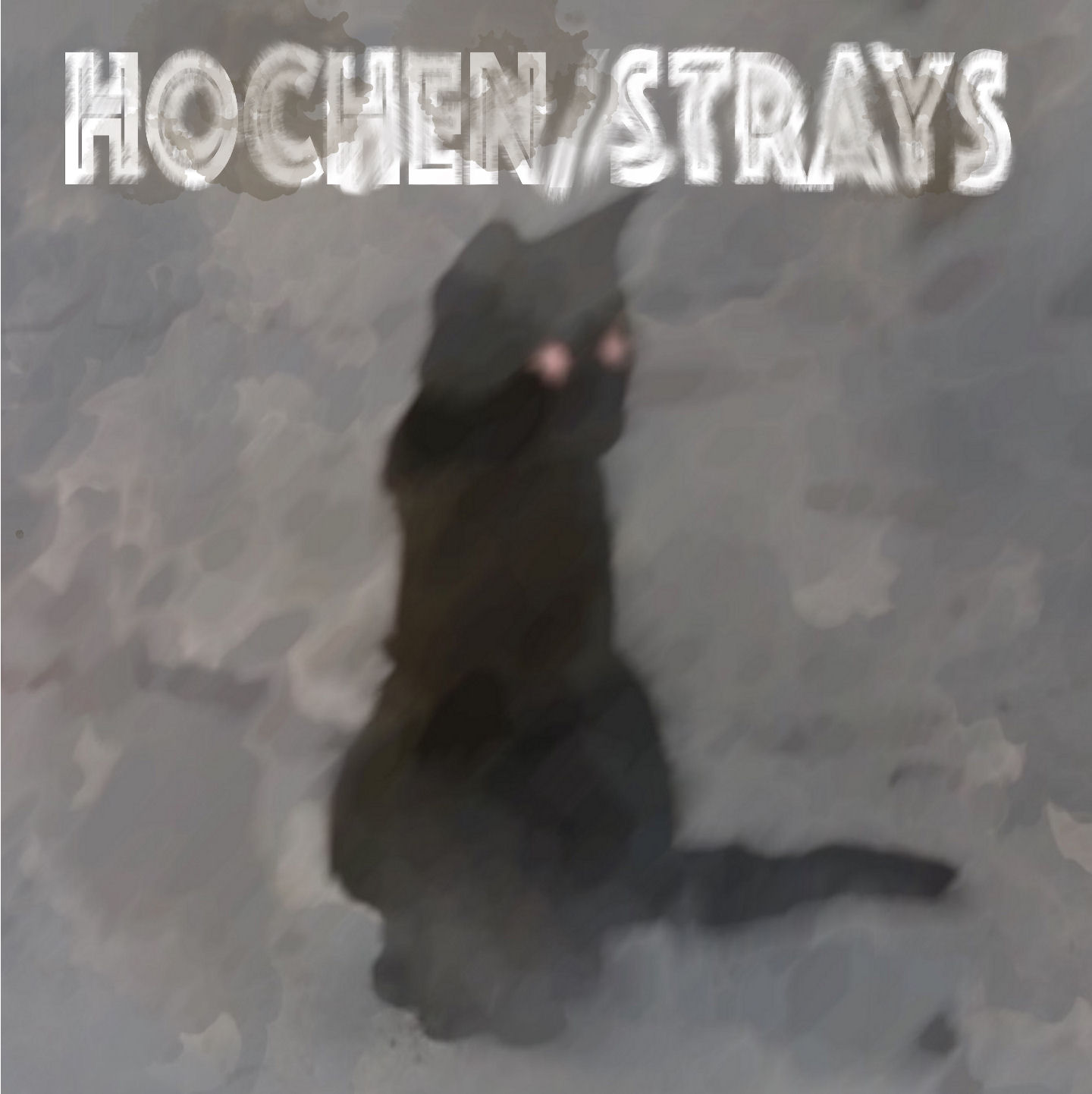 It takes no time at all for Hochen’s psychedelic groove-rock to begin.

From the moment the complex but catchy guitar-riff starts “Man I Am” on the new album Strays, you can hear the commitment to style & sound…from the bass to the guitar to the drums, this first-cut comes out on solid-ground completely.  This album’s opening is incredibly meaty; I love how this first cut explores a seriously deep low-end rhythm and how it weaves through its main-hooks into a real space-like and tripped-out atmosphere at the outset of this record.  “Man I Am” sets the expectations pretty high to be completely honest…it’s impressive…really impressive…and it definitely sets the tone for the rest to follow.

Probably important to note…and something that’ll make you smile about this project…actually…wait a minute or two…I want to get into this after you take in the second-tune “Dead Friends,” not just yet…

Again with a serious amount of crunch and groove to the melody and rhythm – you can hear how each and every moment in the music has a serious relationship to the others happening around it.  Each instrument works completely complementary to each other and the result is another completely solid vibe that struts and strolls through your stereo speakers on “Dead Friends.”  Very much like a Beck song when he’s in his rock-mode…like the songs on the riff-laden record Guero…Hochen has put perfect pace & space into this song to make each second make its mark.  The drift into the chorus of this song…the incredible guitars during this moment…the great machine-like drum sounds…and once again the complexity in the riffs and how they come together to form a really smart melody overall that is guaranteed to captivate…it’s all such an indication of real time-taken, real writing and a serious dedication to the art & craft during the execution of performance.  “Dead Friends” is an absolute riot to listen to and really packs a massive crunch into its smooth & chilled-out vibe.

Okay…so…about what I was gonna say before.  I’ve decided to still make you wait a bit on that.  Sorry.  You’ll understand soon enough…

Some of “Girl On The Street” I really liked…some I thought needed a little bit of a tune-up.  First of all, acknowledge the tough-placement…because coming after “Dead Friends” would be a tough role for any song to fill – so keep that in mind.  What I liked about “Girl On The Street” were the same qualities that I could see many people struggling with…so it might come down to a personal choice in sound on this third track.  Personally I like production like this…Hochen has put the vocals set deep into the music and complementing the melody and rhythm like you’d find in The Strokes.  It’s there enough to make its presence known…but really it’s the music that leads the way through “Girl On The Street.”  If anything here, I thought maybe the guitars of the main verse might want to sink into the mix a little bit more than they do…and I think that the chorus itself isn’t built on hooks as catchy as the first two tracks on Strays.  That being said – I think the trade we make is for some wicked instrumentation around the two & a half-minute mark…there’s still ideas here that work well, especially the ending of this track, which I thought had a spectacular ending.

Alright…gotta let this cat out of the bag.  You know how this music of Hochen has sounded impressively thick, rich, full and all its instruments completely in-sync with the ideas & concepts all along?  You know how it’s sounded like The Butthole Surfers melded with Queens Of The Stone Age?  You know those are FULL bands though right?  You know where I’m going with this yet?

Hochen is the results of ONE MAN’s hard-work, effort and incredible writing…a guy named Stu Leiter.  So DIG that people – cause everything you’ll hear is written, played & recorded by the man himself.  Listening to tracks like “Dead Friends” come out with so much vibrant strength…or the multiple parts of a song like “Raised By Wolves” – it really is impressive to think this was all achieved by one guy!  “Raised By Wolves” is a perfect example of a full-band sound…it’s like a twisted-up marriage between Primus and Cake…and MAN does it sound good!  I think the rhythm and groove…the amount of space and push-pull tension in “Raised By Wolves” and the additional keyboards…I mean…Hochen is sounding damn good here!  The music comes out in a playful attack…deadly in its crunch and distant vocal-sound…and completely inviting in its rhythm & groove.  Stu…brother…you’re killing it over there man – this album is turning out really strong…and it’s been YOU, all alone, the entire time.  A first listen through on Strays without any information for anyone would immediately have any set of ears swearing this album was made not only by a full band, but one that REALLY knows their style & sound well.

And achieving that alone is impressive.

I did feel like around the time “Lip Gloss” started that I was getting a good grip on the overall sound of Hochen…it was right around here that I felt like the connection to the album gets even stronger.  If you like what you’ve heard so far, you’ll continue to dig right in.  “Lip Gloss” makes use of the metering and space like Hochen has already been doing well…maybe even a little more so here.  Feels like each element of the music, especially the guitars, really gets a chance to draw itself out in-full and let the notes & sound really expand.  The result is a wickedly groovin’ tune that pulses along with a deadly energy and really expressive tones from the guitars – absolutely one of my favorite tunes on this record for the instrumentation here.  It’s a slower grind overall – but the pull of the energy in this one got me on its side quickly, and permanently.

Strays is definitely an album you want to turn way UP and let the dynamics of the production and dark-sparkle in these performances really come alive through your speakers.  The instrumental beginning to “In The Weeds/Strays” sounds spectacular…I suppose that’s the “In The Weeds” half before it plunges into the controlled madness of “Strays” thereafter.  Excellent drum ideas in this track…loved the intensity that the production on this cut has led to altogether…no matter where the divide officially occurs if there even is supposed to be one – “In The Weeds/Strays” is a wicked combination.  Loved the additional synth and electro-samples that come into the ending of this track; overally this track has a seriously impressive composition and structure that builds masterfully.  It’s got that slight bizarreness to it…like Hochen is capable of coloring just inside the lines when you’re paying close attention…but the moment you look away is already making his own masterpiece on the other side of the paper; these songs have incredible layers and depth to them.  Again, for this level of depth to the music to really be as present as it is on an album made by one man…is a rarity I can’t even express in words…but MAN is it refreshing to listen to!

The combination of ideas and ambition on this record has been nothing less than impressive throughout its entirety…I’ve been seriously stoked on what I’ve heard.  So much in fact, that I plan on hijacking the next episode of SBS Live This Week coming out tomorrow (7/20/2016) to put the music of Hochen in the spotlight just to tell you all a bit more about what I think about this record.  So be ready for that!  Songs and sounds like you’ll find on “Altered” to me are so completely rad to my ears I can barely keep up to my fingers trying to express my gratitude for these incredible songs.  LISTEN to that bass-led groove!  SO GOOD!  I thought this track was a fantastic highlight…the incredible blending of ideas and sound here work really, really well.  Like a track that combines Ken Andrews with The Dandy Warhols and the haunting elements of guitar you’d find on Radiohead albums back in The Bends/OK Computer era.  Great movement to this track, the vocals come out sounding great with their effects and tone…definitely a winner here in the late-stages of the record with “Altered” – this track rocks.

Bringing back the complexity a bit more to “No Worries,” Hochen puts in another impressive turn instrumentally and gives the musicians something to listen to here.  For the average listener…”No Worries” is going to prove to be a little bit tougher…its chilled-out vibe almost goes too far and sounds a little lethargic in the chorus, the hooks aren’t quite as powerful here but the build of the song is still impressive.  “No Worries” has one of the best breakdowns on the record – I can say that with confidence; I really liked how it broke right down to just the keys at one point before heading back to the final run through of the chorus.  Solid rhythm in the verse…just a lot tougher for the everyday listener to get their head around for certain.

Does Stu make the right choice at the end of the record and leave us with a song that makes a lasting impression and impact though?  YES.  Yes he does.  “From My Backyard” is nearly synth-led in idea…but I can hear from the combination you could argue it’s just as much bass or guitar-led as well…every part of the instrumentation in this final tune really stands out for all the right reasons.  Hochen’s album takes a slight departure in the sound here…but not one that plays illogically – it makes sense in terms of the progression of the style of this record and definitely still fits, it just also happens to nod at the potential for even MORE in the ideas of Stu’s musical-mind.

And I know I just pointed out a breakdown I loved on “No Worries” – but I said it was ONE of my favorites.  If you wanted me to choose my actual favorite overall, it hands-down goes to “From My Backyard.”  The way this track cuts it all away, only to bring back an even deadlier sound that rages right to the final moments was pure audio-genius and absolutely makes all the impact that this impressive record truly deserved into the end.

I really can’t wait to tell you more about Hochen and this album Strays…so like I was saying – be sure to check out our posting of SBS Live This Week tomorrow and I’ll be sure to let you in on a bit more about what I think of this project.  I’m pretty sure you get the idea from this article – I think this is beyond impressive, especially for ONE MAN…but tune in all the same, you’ll want to hear what I have to say!

For now, find out more about Hochen at Bandcamp here:  https://hochen.bandcamp.com/releases