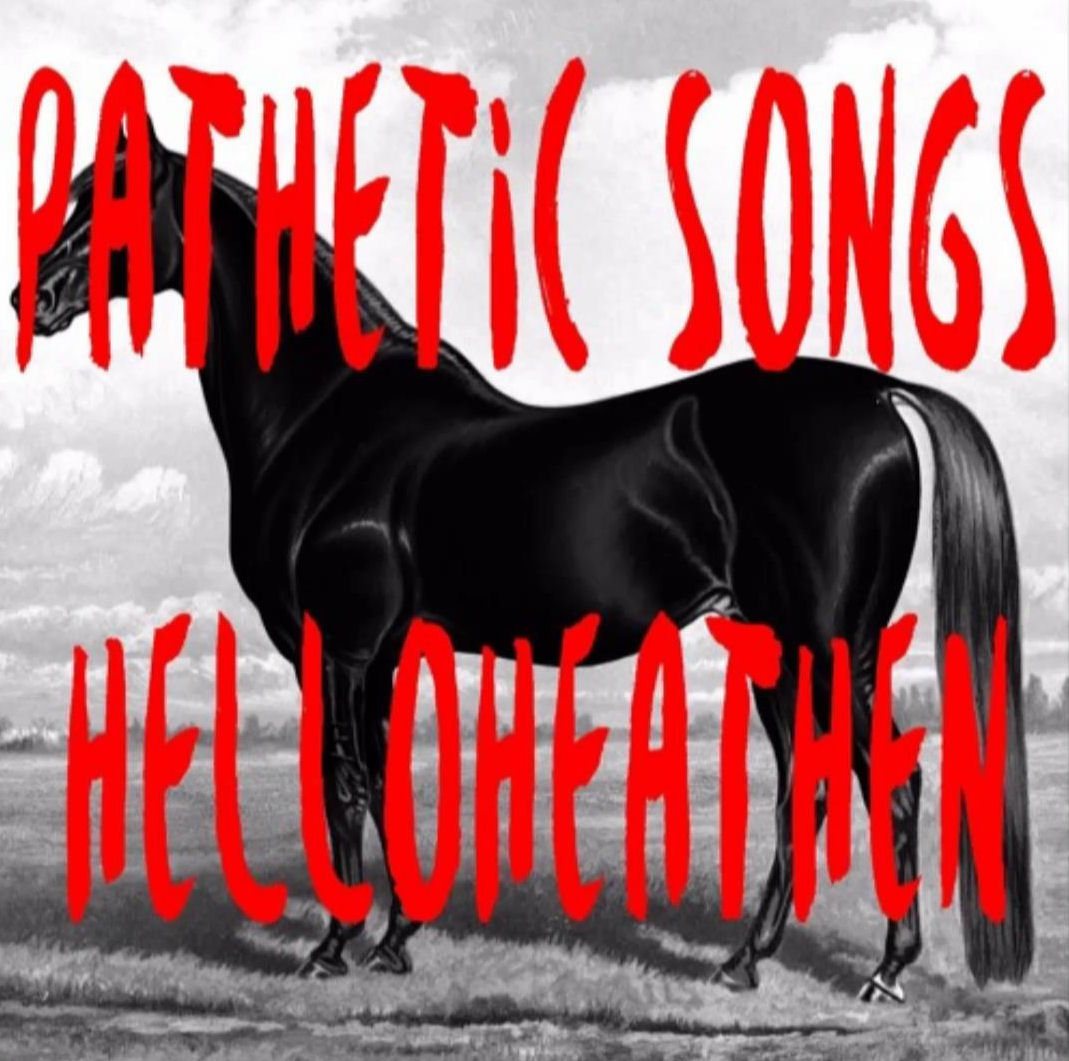 One of my favorite choices for unsung-hero out there in the independent scene – HelloHeathen has been examined here many times in review, been featured on our SBS Podcast, and in general, has always kept us guessing as to what will come out next.  Sincerity, melancholy & melody are quite often on the menu and frequently combined together, as they are on the opening tune of Pathetic Songs, called “Samsara.”  The gentle & accessible sound of the inviting melody and combination with the contrasting sentiment, tone & questioning of the lyrics possess the signature elements that have ALWAYS made the sound of HelloHeathen captivating to listen to.

And keep in mind…I’ve heard pretty much everything there is out there on this artist from professional studio-jobs to demos recorded on a freakin’ phone…and I STILL stand by that statement – this cat is ALWAYS cool, no matter what state we find him in.  Listen to the innovative sound of “Being Lonely” and the magical moment this track becomes.  I loved the hollow-sound to the recording of them…layers of vocals perhaps…something that gives them a thick tone but distant feel.  Clever vocal-flow to this one that puts a perfect spin onto the subtle but effective electro elements surrounding them…there’s real atmosphere in this one.  One of those seriously effective, gentle & hypnotic tracks that really takes you out of whatever you’re doing in your day to get lost for a moment in music and let your mind relax & take a timeout on the rest of the world…and we all need those!  “Being Lonely” is definitely a highlight.

I always expect a bit of the bizarre incorporated into the mix of HelloHeathen’s material…that’s part’n’parcel with a new set of songs from this dude.  The next couple cuts lean more towards the artistic-side of melancholy & music with “FIFTY” and “Retro – I’m Pathetic (Demo)” – and true to the very core of ‘artistic’ anything, some will get these tunes, others might struggle a bit here.  I felt like “FIFTY” might have taken about thirty-seconds or so to find its way…but once it did, this largely worked for me.  Like a blend of Thom Yorke and Tortoise…the composition here is actually quite unique, bizarrely-but-creatively assembled…but it WORKS.  Combined with the extraordinary, hazy texture to the vocals – personally I thought “FIFTY” was one of the strongest tunes on this record once I fully absorbed this tune.  “Retro – I’m Pathetic (Demo)” was an interesting beginning to an idea and the first of many ‘demos/outtakes’ that fill the bulk of the EP once “FIFTY” is finished.  I felt like “Retro – I’m Pathetic (Demo) was strong in the verse, strong in the instrumental-sections…but I thought the chorus was probably asking a lot from the average listener.  I mean…we’re not just casually walking into the rabbit-hole here so much as we are tumbling into a vortex of ideas over-top of each other.  HelloHeathen has made music from intense electro to bare acoustic from my experience listening…but not often over-stuffed or over-full…I felt like the chorus of “Retro – I’m Pathetic (Demo)” probably has a layer or two too much, but outside of the chorus, really liked the song.

“Leather Face (Demo)” might still be in the infancy of its writing…but there’s definitely something strong here.  I love how this guy takes real chances in his singing and really adds a ton of emotion, raw feelings and genuine personality into what he writes…how the music is often less than typical but finds insightful ways to claim victory.  “Leather Face (Demo)” with its string-filled ending and melancholy, haunting melody ends up becoming stunningly-clear through the dark of its lyrics…definitely a song worth pursuing from start to finish and one that I’d imagine would require very little to lose its ‘demo’ status.

It blows my mind that some reviewers & listeners out there won’t take the time to listen to demos.  To think that I’m listening to one of the first versions of “MurMur (Demo)” is an HONOR to me; these are the moments I get up and live and breathe and eat and exist for.  Hearing this melody theoretically at its most innocent…and how genuinely authentic it is in its emotion & sincerity is an all-out privilege to the ears.  HelloHeathen has ALWAYS had an innate ability to harness melody in an earnest, humble & sincere way that really resonates strongly with me – “MurMur (Demo)” is a song I’d already put at the top of my playlist…not sure what else could possibly be done to this tune to make it any better.  The mix is good…I think the vocals are beautifully forlorn and supremely expressive and I like where they sit atop of the music on this one…I think they’re the star of this show.  The music accents the melody-line of the vocals sweetly & sadly at the same time perfectly…LOVED this tune and the way it’s sung – definitely one of the strongest tunes I’ve heard from HelloHeathen’s growing catalog of songs.

“Black Days (Outtake)” has the lyrics at their absolute bleakest…and that’s saying quite a bit.  HelloHeathen isn’t exactly known for writing the most uplifting words you’re going to hear…but this one was interesting in the sense that it sounds like it was written amidst the fury of a panic-attack.  It’s an ‘outtake’ of course…so I’m not expecting audio-gold…come to think of it I really don’t even know that I know the difference between an ‘outtake’ and a ‘demo’ other than the wording itself.  Wasn’t the strongest tune from HelloHeathen…I don’t know if it’s time to necessarily abandon-ship on this idea, but perhaps that’s the difference between an ‘outtake’ and a ‘demo’ right there.  There are moments within “Black Days (Outtake)” that still manage to stand-out, but ultimately this is one seriously depressing track and a tough one to love!

Redemption does come through the final track “The Death Of The Universe (Outtake),” which was another pretty solid idea from HelloHeathen at the end of this record of Pathetic Songs.  The melodic-aspect is restored in full…the tone is brighter, reflective and personal…I think this tune worked out well-enough to certainly warrant its inclusion.  “The Death Of The Universe (Outtake)” might not have had my favorite chorus, but I can’t deny that its rhythm stuck in my head.  I liked the spread-out atmosphere in the verse…most of the lyrics I thought were strong aside from a couple lines…overall, it’s a good tune.

Comparitively…the first three certainly hit home, but I felt there was some extremely strong material in the demo-section of Pathetic Songs as well here.  As ever…I remain purely stoked to hear anything coming from this artist as there is ALWAYS a serious gem or two or three or more within the confines of the melodies and music HelloHeathen makes.  The album title might be a bit harsh…don’t let it fool you – many of these tunes are solid as steel and it’s another solid addition to the ongoing legacy.

Have a listen to Pathetic Songs by HelloHeathen at Spotify:  https://open.spotify.com/album/1Hbr1yZo5XHWDEfkGRmI0H