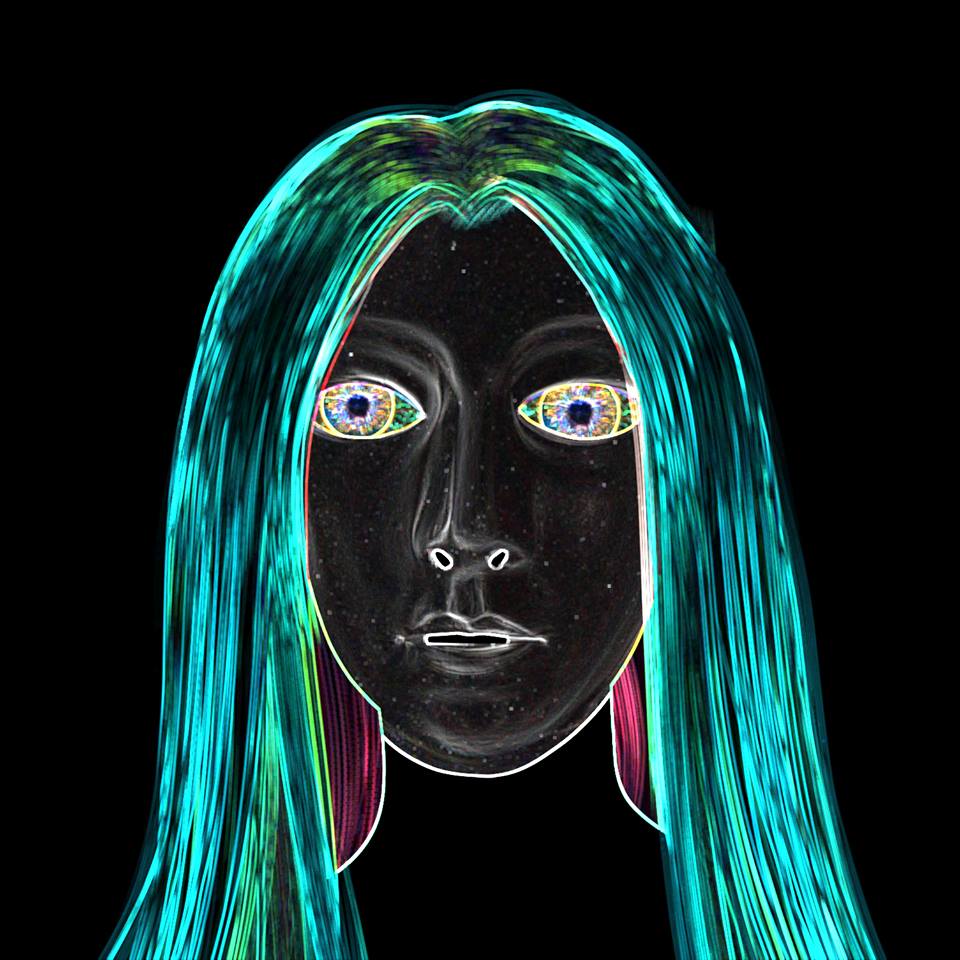 Considering the last time we heard from HelloHeathen, he dropped off some demo-tunes that had just been recorded over his phone and I STILL welcomed them with open arms & ears…well…I’m sure you can imagine just how happy I am to see this guy show up on my playlist whenever it happens based on that alone.  One of my favorite songwriters out there in the independent-scene today and one we’ve had the pleasure of reviewing several times over now – HelloHeathen is back with a brand-new EP, Music To Die To.

So clearly, based on that album-title alone you can tell he’s cheered up a ton.  So on this set of seven new-tunes filled with unicorns, rainbows and birthday-cake…are all words I’m likely NEVER to be using to describe the melancholy moods and heavy, emotional atmospheres created by HelloHeathen.  And while you’d assume that the ability to just make amazing music whenever he picks up an instrument of any kind might have HH in a happier, more upbeat mood all the time…but that sunshine never seems to break through the clouds that hang directly over the head of HelloHeathen.

That being said…some of us out there just have a gear or two that we particularly write very well in.  Melancholy & moody has always been the attitude on display throughout the HelloHeathen catalog…but so too have been amazing melodies and inspiring hooks…from the phone-recordings to the music-studio, I’ve been a firm believer that this one-man project is one that is seriously incapable of failure.  Everything I’ve heard so far has been nothing short of stunning…and when the title-track “Music To Die To” started into its percussion/electro-infused beat…I realized that yet again, HelloHeathen is going to bring out a new dimension of his sound and atmospheres once again…and scolded myself for assuming this experience would be anything like the last, no matter how much I wanted it to be.

“Music To Die To” is like a combination of grunge-sentiment meeting a synthesized-environment.  Putting his strong-grip on the throat of the thick atmosphere that envelops the vocals of “Music To Die To,” HelloHeathen sounds audibly like he’s ready to kick the chair out from underneath him and let himself hang.  Now…quite obviously, that’s not something I’d ever want to happen…it’s just a comment on how perfectly the performance matches the words.  The relaxing atmosphere set in contrast to the words…it’s like the musical-equivalent of heading towards the light…inviting & calling you.  Great swell to the low-end of this opening tune…great synth parts, great melody & flow to the lyrics and stellar performance overall…it’s a perfect beginning to a brand-new experience with HelloHeathen.

By the second-track, “#sadface,” you realize that HH is putting down the guitar for this record…it’s definitely an electro affair.  With his wandering, far-away & hazy vocal style…set against the minimalist-electro music he’s created…it’s something like Thom Yorke attempts outside of his life in Radiohead; only in my opinion, where Yorke has been leaving us high & dry quite often is some form of cohesive melody…and I feel like a strong melody is always at the top of the list for HelloHeathen.  “#sadface” glows warmly in its electro-jazz melancholy, many of the lyrics are inaudible…but that’s okay…they break through when they need to and otherwise sound like a perfect complement to what’s happening in the music.  As chilled-out as it is complex, the music of “#sadface” would qualify for the experimental-side of what you’ve ever heard from HelloHeathen…but there are certainly moments that are bound to resonate with the masses outside of the niche.  The quick-break around the three-minute mark for instance…you can’t not love the way that sounds…perfect way to keep the music dynamic there before rolling through the chorus to the end.

What a difference solid low-end makes!  After the last guitar-melodies of HH’s Blue Tapes Demo EP the last time, where there was like, no low-end at all…to hear the massive beat & swell of “Symmetry” is just as surprising as it is incredible to the ear.  A track like this is where you get to hear some of the real genius of HelloHeathen at his best…he sounds like a young version of Beck still strapping-in to roam through the vast terrain of unexplored ideas in music throughout the first two minutes.  “Symmetry” rocks these first couple minutes…and if anything, overhauls this track’s ending just a lil’ bit.  Or a lot bit.  The final two-minutes of “Symmetry” plays like four competing radio-stations all jamming into the same frequency…so…yeah…it can sound a tad overstuffed here in these moments.  I think without that final lead-guitar line in there, it might have still made sense to the ears…it might be something else that’s interfering, but that’s my guess as to what it is.  There’d still be a ton of insatiable madness going on without it…but I think it’s that one competing melody-line that throws the rest off.  It’s an interesting idea, and one that explores the real depth & texture of sound, just not sure it fully worked out on this one…for me, “Symmetry” played a little unevenly with my ears favoring the verse over the chorus.

I don’t think I can be alone in saying that “Without You” certainly rules.  Perfect example of HH’s ability to keep whatever he’s singing about nearly a complete secret and still make you want to hear every second of his voice.  The amount of jazz to the beat & electro-rhythm here on “Without You” sets the stage for the vibrant vocal performance…again, the energy, even in contrast finds a way to fit this music perfectly.  Really loved the mix on this tune…the extra layer of like…I dunno what that is, ‘steam-whistle?’ or whatever it is, is like the icing on the cake at that point around the song’s final minute.  From the beat to the production, the ideas to the performance itself…the execution of “Without You” is a real testament to HelloHeathen making music into pure art.

“One Day” might be as close as it gets to acceptance from me, or worse, indifference.  I don’t love it, I don’t hate it…I think compared to what we’ve already heard along the way throughout Music To Die To, it’s missing that extra-magic.  Maybe a step too far towards the minimalist direction here…or maybe a spot that would have benefitted from a slight-switch in the vocal-sound…it might be the lethargic pulse to the song itself…”One Day” is a tough song to be entertained by after what we’ve heard from HelloHeathen already on this record.  I’ll admit…subsequent listens of the tune gave it a bit more of a positive rating than my initial reaction did…but I do feel this track would have been right on the fence for what I would have kept on this EP, it could have been a strong b-side or separate single…maybe even a bonus-track…but it pales a little by comparison to the rest of what’s on Music To Die To.

I might have felt the same way about “Death Poem” as well if I had only time to give this record a single-spin.  It didn’t grab me at first…I felt a slight connection to it, but that could have been my nagging want to always support what HelloHeathen is doing whenever it’s possible.  I put this one track on its own on repeat and just let it spin that way instead…and it really became a highlight for me.  It moves with a bizarre pace…but really, there’s a smooth, sad and soul-filled song here…just takes a few spins to really appreciate all it’s going for.  “Death Poem” on repeat kind of allowed me to shut the rest of the world out for a moment, and just dive right into this one…by the end of it all and my time listening to this new EP, could pretty much say this became one of my favorites.  Something about the overall energy of this track…like it’s just barely hanging on…the final moments of a long, long journey…it drags along in a way, but truly hypnotically…I couldn’t give “Death Poem” anything less than my full-attention, I found it to be incredibly moving.

“Deer Park (Outtake)” – can someone remind me what an ‘outtake’ is again?  Did that become synonymous with ‘perfect ending to an EP or album?’ – is that a thing now?  To think that in my world…where I come from, an ‘outtake’ is like a bonus…or like, implying that we almost MISSED it making the cut…and that dear readers, dear friends, dear pals…that would be a crime when it comes to “Deer Park (Outtake).”  I thought this song really lifted up the final moments of Music To Die To in a strong push to really create that memorable impact these songs need as a summation.  “Deer Park (Outtake)” is a gorgeous, dark, swirling, light-jazz & piano composition.  The lyrics really stand out perfectly sticking to the atmosphere of this final track.  I think in general, the vocals really deserve a lot of credit for their help in the mood & tone of this EP…you might not always catch the words, but you’ll always feel the feelings!  Love the piano of “Deer Park (Outtake)” – the whole flow to this final track really raised my opinion of HelloHeathen even further; I might not ever know what he’ll send me…but I can tell you firsthand it’s always captivating and always worth a listen just to hear what he’s come up with each time.