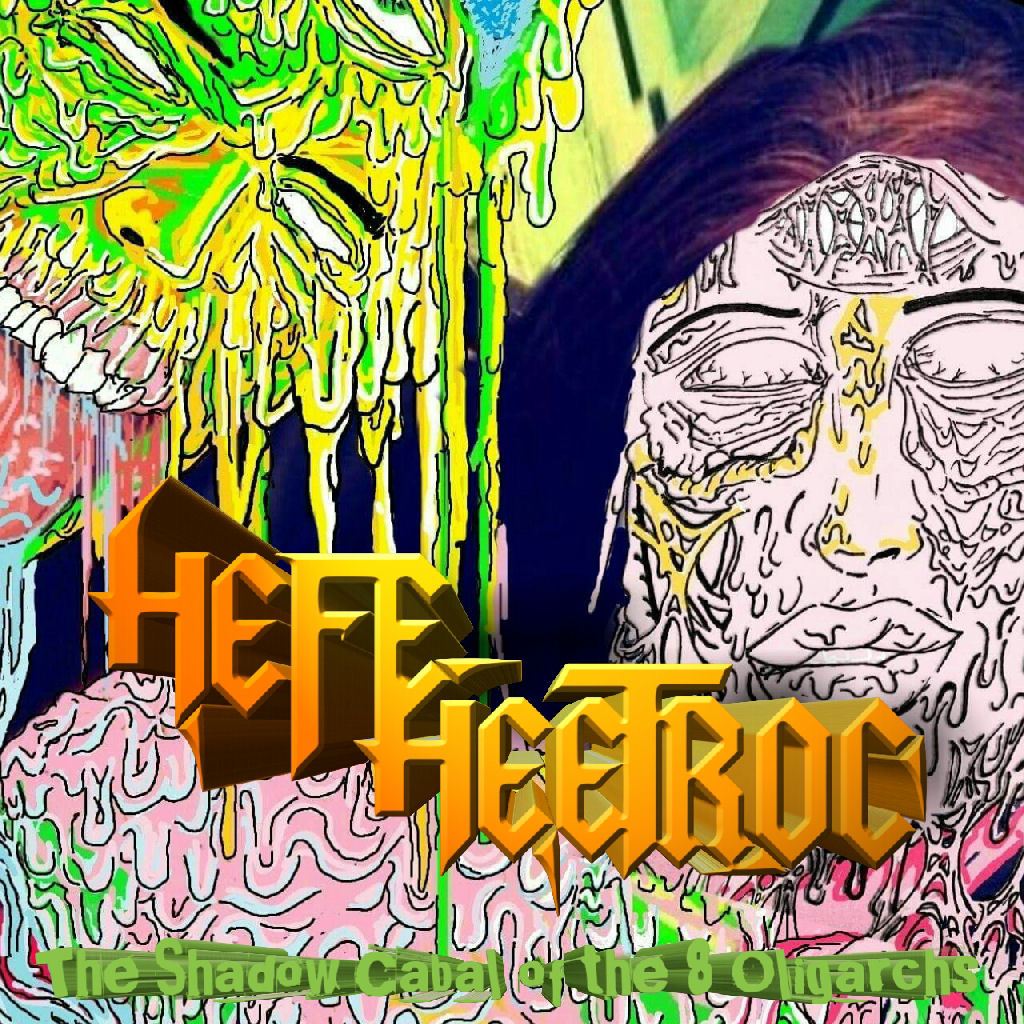 Always interesting when you get an album-sampler…especially when the album’s already out…especially when you factor in that we’ve been down this road once before with Hefe Heetroc in the past when we reviewed a handful of tracks from his Inoculare album last year.  What are you hiding Heetroc?  Sending out a piece of the record as opposed to the whole certainly makes a guy wonder what those other tracks might sound like…makes a guy question what makes the tracks being sent are assuredly the right ones…makes a guy wonder why the other ones didn’t make the cut to send out first, know what I mean?  Anyhow…I’ve got four tracks from his new mixtape, The Shadow Cabal Of The 8 Oligarchs here for now…we’ll get to the bottom of this mystery one day I’m sure and prove that this emcee can go the full distance of a record, but for now, just a snapshot of what’s happening on the album – let’s do this!

Hefe Heetroc starts us out at the beginning, we’ve got track number-one from the record with “I Already Got That” and we’re quickly reminded of the qualities that made his music stand-out the first time around.  The complexity and fullness of the music is a signature part of the Heetroc sound…almost blending IDM and Hip-Hop together in equally powerful doses, “I Already Got That” features his tricky lyrical style right upfront along a wild electro track that definitely makes the mind trip right out.  I know for a verifiable fact that Hefe is just as passionate about his bong as I am…I’m not going to pretend I’m getting everything that he’s saying here lyrically on “I Already Got That” but I can tell you that the flow works with the beat and that the cut itself is highly dynamic in sound and completely entertaining.  I really dig the pacing and how he approaches the chorus of this opening cut…again I have ZERO idea about what the hell he’s actually talking about or referring to in the words themselves, but I sure dig the way it sounds.  Why he thinks he needs some brand-new thumbs is definitely beyond me!

Now here’s why a music-reviewer will get straight-up NERVOUS when reviewing an album sampler…not just a reason, but THE reason is right on full-display right here – we’re about to go from track one all the way to track EIGHT before we’re let in on what’s up or what’s good.  I don’t want to suggest that he’s front-loaded the record with filler and the loaded up the back to knock it out of the park…but optics count for something for all of us and lead us to assumptions when we examine things like this through the microscope.  I’ll have more on this later on in the review…but it’s something for everyone out there sending their music around the globe to certainly consider, isn’t it?  Heetroc that means you too.

All that being said…I’m satisfied with what I’m hearing way down on track eight with “This Is History” – more-so than I was with “I Already Got That,” which I also enjoyed.  “This Is History” dials back the busyness into minimalism and really has Heetroc rockin’ the mic with very little surrounding him in the atmosphere.  It’s on his shoulders to deliver this cut through nearly his own flow alone – and I think he seriously pulls this one off with a gripping performance.  Winding word after word together and stringing sets of bars together like it ain’t no thang, Heetroc makes it all sound effortless and highly-skilled at the same time.  Don’t confuse his laidback Mickey Avalon-esque approach and sound for anything less than hungry and focused – it might sound easygoing in its tone but he’s keeping it seriously lyrically sharp on “This Is History” and impressively finding a way to insert what sounds like the entire dictionary and multiple pop-culture references into this rhyme.

“Addiction Tonight” is a seriously interesting cut – you can’t help but notice how different this one is right off the bat.  I honestly wasn’t completely sure if the vocal-production on this one worked for me at the beginning…and by the end, I took an entire 180-degree turn and felt like this one really DID work.  I think it’s the shock of the difference of the track’s overall sound on that first listen – but this is the kind of creativity that I think is entirely important in music and shows exactly what an innovator Hefe Heetroc can be when it comes to keeping his own sound incredibly diverse, versatile and surprising.  Right?  I mean – c’mon…that’s a damn good word to describe music, ‘surprising.’  A massively underrated and underused angle in music…it’s not just about creating a slow-tune when you rock 99% of the time, it’s really much more about something like “Addiction Tonight” that switches up EVERYTHING from the production to the effects, the mood & the atmosphere…the tone & character on the mic…the editing…it’s all here.  Like I said…I was confused at first but it didn’t take me long to catch on; by the time I finished spinning this track several times over I was absolutely convinced this is one of the most genius tracks I’ve heard from Hefe Heetroc without a doubt.  There is ONE thing I’m wondering about…which is the audible digital-skip that occasionally occurs…I don’t think it can possibly be an accident and it would certainly fit with this style of the production – and it’s not even the sound itself I’m wondering about so much as how did this guy find the STONES and the COURAGE to DO that?  Adding a purposeful glitch that noticeable into the editing & mix of a song can be a VERY risky thing to do…people that don’t ‘get it’ always equate it to poor production.  LISTEN to the elements of “Addiction Tonight” and the clarity surrounding the contrasting distorted vocals and you’ll know this is no accident – that’s just straight up brilliance if you ask me…and certainly ideas that audiophiles like me live to hear.

By comparison to the first three…I was a bit indifferent about the final track on the record, “Take That Toke That.”  I mean…I don’t mind if I do…”Take That Toke That” that is…but undeniably this final cut felt slightly more like a novelty compared to the other three tunes.  I think it might have had a bit to do with Heetroc being a bit more sunk-in to the mix of the music here…which makes the words harder to get to as a listener; I liked the frantic-style of the electro-mix in the music once again but definitely felt like it took the words over more than maybe it should have on “Take That Toke That.”  If I kind of like…you know…just listened to this one more like I’d approach listening to an instrumental, I found I liked it more by switching my mindset up just a bit; it allows you to hear Heetroc’s vocals as an instrument in the melody of the electro rhythm pulsing away as opposed to trying to bend your mind trying to catch every word in the mix.  Not entirely sure about the sharp spikes in volume in the production on this one either if I’m being 100% real…I get the idea and I like the idea of what he’s going for…not sure that it didn’t come out more than most people could handle though…time will tell.

Anyhow.  The mystery of the missing middle and why it’s crazy to send out samples overall…would I have chosen “Don’t Count On Me,” “Manifest All The Minerals” or “We Move When We Rap Do Not Worry” before sending out “Take That Toke That?”  Of course.  The middle of the Heetroc record holds up strongly…I couldn’t help myself and took a listen for myself to get a glimpse of what he was holding out on us with.  Specifically, I really dig the innovative and creative poetry you can hear in a track like “We Move When We Rap Do Not Worry” – he’s got incredible phrasing and pace in his flow that really stands out strongly…and it almost sounds like he’s got the cloud/coin levels from Super Mario 3 rocking the background.  I don’t think it is, but it’s damn cool all the same.  LOVED “Deep Space Stars Galaxy” as well – that would have been another tune I’d have sent long before “Take That Toke That,” but I’ll admit, it’s always tougher to know exactly what to send out when you’re personally involved and invested in the work.  That’s the same exact reason as to why the ‘hits’ and the songs that the fans love are usually never the same ones that come to the minds of those that wrote, recorded and created them…sometimes it takes that outside perspective to gain a better sense of what’s really working overall.  Hefe Heetroc shows a lot of ingenuity on many of the tracks throughout this record that I didn’t mention in detail, making use of clever effects and smart samples to create really diverse and different material all the way through.  He’s clearly working hard at the crafting of his sound and career and making the right moves to make music that will really stand-out apart from the rest of what’s out there…hits or misses, you gotta respect that.

Check him out at Spotify here:  http://bit.ly/Spotify-Hefe-Heetroc & find out more about Hefe Heetroc at the pages below!