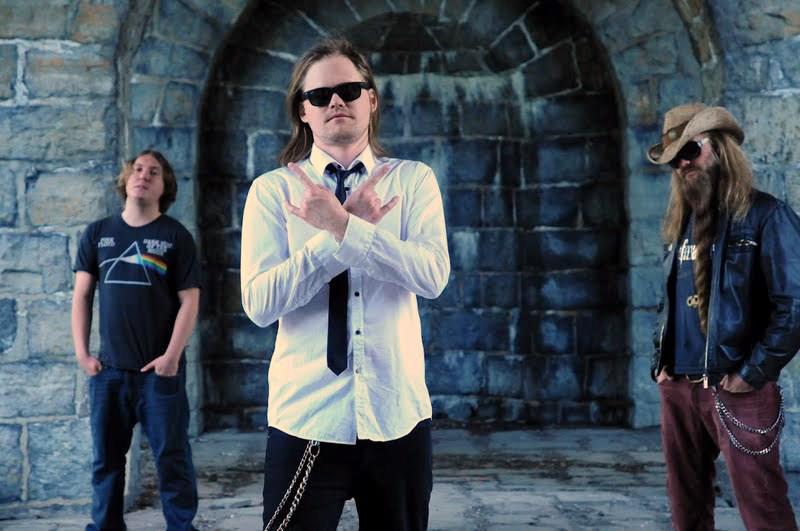 Gonna have to get me the full-story behind this album title one day…it had me bracing myself unnecessarily for an entirely different sound where people would be screaming at me and distortion would be turned up to 11.  Instead – I got the smooth alt-rock sounds of a pretty damn clever band; seems like a worthy trade to me…I feel much better about listening to something that wants to flow into my ears as opposed to ramming down them.  This new record from Harmony Drive does the trick!  All the way from Oslo, Norway too?  I mean…c’mon…you know I’m always into the idea of experiencing music from so far away – it’s one of my favorite parts about this whole music-thing I do!

As far as I can tell – at the core of this band are three players, Lars, Andre’ and Vidar.  If they head out there on the road to tour – you can add three more.  If they head into the studio – you can actually add a different three musicians.  I’ve always wanted to tell Harmony Drive this and I can’t believe I actually get the opportunity to do so – but if they ever stop by sleepingbagstudios, I’ve got three players right here for them just waiting on a shelf in the corner of the room.  Just in case…cause I want to make sure this band has everything they need.

Not that they need any help in finding the right people…I mean…c’mon – if you’re going to enlist ONE person’s assistance on the drum-kit…sure, why not reach out to one of the best of the best and get Dave Elitch from The Mars Volta?  AND then…then they pick up legendary producer Richard J Veltrop, whose credits include Rage Against The Machine, Tom Petty and many, many more – these guys are clearly all-set and they’ve got a fantastic assembly of ace-talent in addition to their own.  Not a bad call Harmony Drive – well played gentlemen, well played.  Over a half-hour serving and eight-songs this band puts in the work, the focus and the writing worth making those phone calls…they’ve done a great job with the Metal Heads With Broken Hearts record. 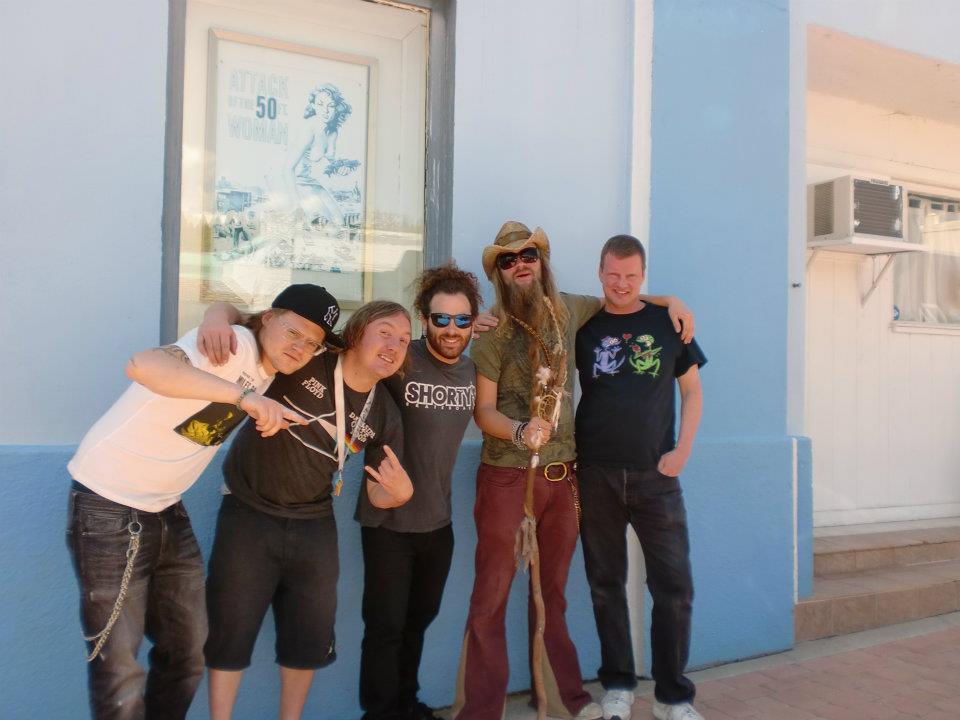 If you were expecting metal like I was, you’ll be just as surprised by the acoustic guitar/string combination that starts up “Something’s Wrong.”  In comes a snazzy beat and smooth vocal-flow…thick & rich chorus follows that.  Love the guitar work in this first cut…that was the real star here for me at the outset.  Dig the production, dig the sound overall…as far as I know “Something’s Wrong” is the first single to be released from the record at the beginning of this month…and I think there’s a case that can be built for that choice.  Do I think they’ve played their best hand right off the bat?  No.  I think it’s a solid tune…but the energy of the tempo/atmosphere combined make this beginning a pretty easy-going on and gently bring you into their sound & style.  After listening several times…I think there’s stronger material further in on the record and singles that will eventually be released to make an even bigger impact later on down the road.  Good rhythm, good groove and I’ve really got no complaints about this tune…I can understand “Something’s Wrong” being the first single…you gotta ease the people gently into a new sound and the hooks are plenty strong to keep’em listening from there.

Case in point though – I already felt more pull to “I Owe You That” within its first ten seconds.  That’s a STRONG hook in the guitar to say the very, very least – what an inviting sound!  Harmony Drive kind of reminds me of the Canadian-based bands The Killjoys or Treble Charger from back in the alt-rock 90’s heyday – there’s a lightness & brightness to the music & melody in their music.  Good ideas on “I Owe You That” with clever effects on the vocals to help them stand-out even more, excellent instrumentation and violin/strings once again, which I’m absolutely loving in the Harmony Drive sound.  Another massively strong chorus…there’s no doubt about this band’s ability to write a hook – they’ve got their writing nailed down tighter than tight.

For me though…things really started to kick in around the time of “Do You Know?” – I dig the classic-nature and smooth-rock vibe of the verse, love the guitar parts and the way they’ve recorded the vocals on this track.  They almost trip into a slightly Oasis-style sound here at times when they get into that chorus – but once again, they’ve found a serious highlight in their writing when it comes time for that part to play.  Harmony Drive consistently writes solid material that has choruses that really lift the song up to the next-level and increase the energy from where the verse was…always a bonus.  The bright rhythm of “Remember” coming after “Do You Know?” displays that same methodology and puts out one of the best parts on the entire record when the chorus kicks-in.  This is a lot like where I feel like Damn The Diva would have ended up if they had kept their band going and sound evolving…I like what I hear in Harmony Drive and I felt like “Remember” was a real highlight for me on this record.

But C’MON…just when you think you’ve heard something awesome enough – Harmony Drive re-ups themselves on the slower-tempo of “When You’re Gone.”  First of all – the guitar work is incredible here, as are the drums…the bass is as the unsung hero and filling in the atmosphere perfectly while the other two elements display intricate, precision-timing and tone.  Vocals are absolutely solid in this track as well, they drift dreamily into the atmosphere of the music and break through whenever the song calls for it.  Great writing, fantastic execution…and the album heads towards a softer-side of the sound with “When You’re Gone” successfully, heading right into their most expanded idea and longest track “Chan.”  I really thought they did well on “Chan” – it’s nearly double the length of any other track on the record, so I was a bit curious as to how they’d pull this one off.  Harmony Drive keeps it indie-beautiful throughout the first two-thirds of the song in a Weezer-esque style melody…and the final third of this song ends up becoming a seriously breathtaking affair.  Everything gets edgier, bolder, thicker, stronger – “Chan” is a gripping masterpiece by the end of its duration and this band sounds more enormous & powerful than ever before as they crash into the end of this song and let the strings ring out into the atmosphere trailing at the end.  “Chan” is full of awesomeness in the structure and movement.

The record itself, is full of change and beautiful moments.  I felt like the most significant switch seemed to happen around the time of “When You’re Gone” as it took Harmony Drive into more serene and beautiful territory in their rock-sound from there on.  “Deserted” is another shining example of the incredible writing this band has working in their favor.  Gorgeous music and powerful chorus on “Deserted” and fantastic harmonies in the vocals; it has a really epic build and uplifting sound to the music…the added keys sound like guitar harmonics and it all sounds incredibly tight, dreamlike, hazy and captivating all at the same time.

“The Last Song” on the record comes around and it’s time for us to depart after this final tune.  Personally I felt like they ended this record very strongly…I really liked the playful edge to the sound of their approach on “The Last Song” and the added amount of melody in the vocals here.  It might also be the only tune on the record whereby I felt much more attached to the verse than I did the chorus.  I think they’ve done well on both these main elements of the song – but that verse is truly charismatic and charming to listen to.  Excellent flow into the final-minute of “The Last Song” where you get additional vocals with bombastic energy invading the melody – I just want to know how they got that mix so perfect!  You’d think the screams would burst through and disrupt this gentle sound of “The Last Song” a lot more – but truthfully, they come out sounding perfectly aligned and meant to be a part of this final moment of the experience with Harmony Drive.

Overall – I think this band has a lot to offer…and I think they’ve done themselves very proud here on all eight of these songs.  Metal Heads With Broken Hearts was solid throughout its every moment from production to performance and highly entertaining.  Great band, great sound, great rhythms and great grooves = no complaints from me!

Find out more about Harmony Drive from their official Facebook page:  https://www.facebook.com/harmonydrivemusic