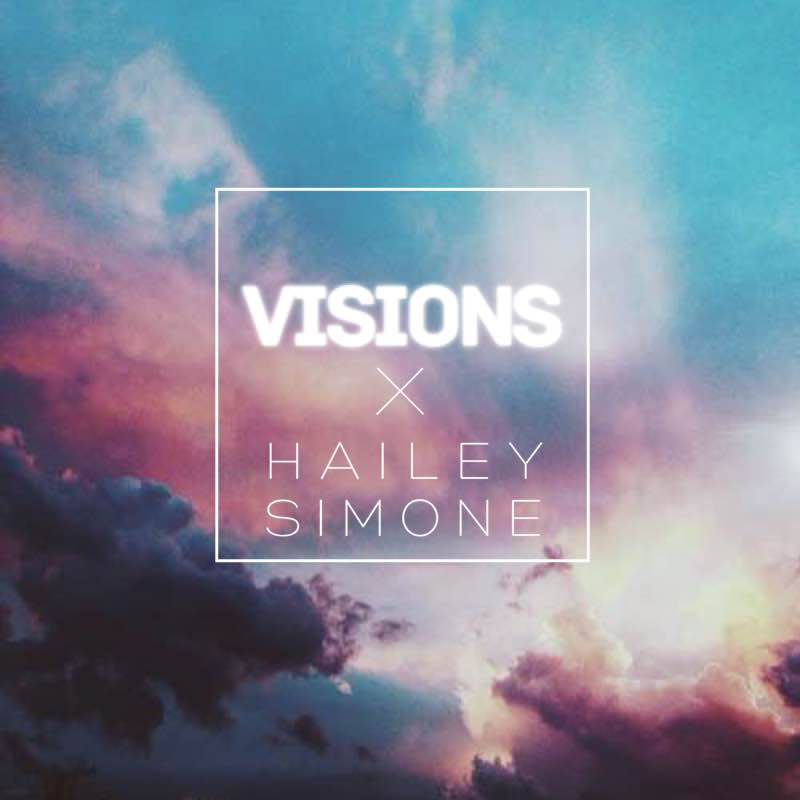 Within the first minute of Hailey Simone’s new Visions EP you get a solid dose of the talented lyricism that will continue on to be one of the defining-aspects of what Hailey Simone has brought to the Hip-Hop genre with this new release. Using a range of talented producers like Nova, Chit Maker, Dreamlife and High Flown has led Hailey Simone in a versatile direction that gets her flowing over a variety of inventive soundscapes that set the perfect stage for her innovative & creative rhymes.

At least that’s the way I’m seeing/hearing this…Hailey’s a song-writer for sure, first & foremost. You can hear it right away as she starts into “Vertigo” and how her words hit the metering right on. The hooks are clever, the beat is smooth, the words punch-out in all the right spots. Aside from the tone of Hailey’s vocals occasionally slipping around a bit in this opening tune in the bridge as it heads towards the chorus, she puts the chilled-out energy perfectly throughout the song. There are a few lines that are still approached with the right timing, but sound a little less confident than the rest…or where the energy drops just slightly enough to notice the full-power isn’t being pushed from lips to microphone. Just go easy people…she’s still busting into the scene and looking for that confirmation that she truly has a valid place in the Hip-Hop scene…refining her sound and testing out her abilities. For me the most impressive aspect of “Vertigo” was the promising potential of stumbling upon a stunning song-writer; the parts of this opening tune were so strong that it’d be impossible to ignore the fact that she’s created about four massive, major hooks within this first song alone. I dig the beat, dig the vibe, dig the chill-ride that “Vertigo” glides along to…strong start for Hailey’s EP.

Carrying sweetly into “Visions,” the EP’s title-track, she writes about the future to come…an internal dialogue come to life and shared with us…the verbal-blueprint to Hailey’s plan to grind out her success. I realized with this tune we had something in common beyond being wordsmiths as this song played; I could hear a strong, confident woman leading the way through the rapped-out verse of “Visions,” but when it came to the chorus & pre-chorus…I noticed something. This lady isn’t quite sure that she can sing yet…you can hear that confidence roll-back a little when it comes to the singing-parts within both “Vertigo” and “Visions” – but here’s the thing; Hailey – you CAN sing. The tones are there…but the power behind them sounds slighted at times…and I think that pulling-back is slightly due to a lack of confirmation – so let that come from me. It’s all mindset Hailey…and as a song-writer, you’ve left yourself no choice if you’ve written these parts into the songs – if you’re gonna put’em in there, go after them with EVERYTHING you’ve got my friend; it’ll be the difference between tracks like these being good-songs and being great-songs.

Rap-wise, timing-wise, writing-wise…Hailey knows exactly what’s up and delivers on a constant-basis throughout the opening two tracks. I think the hook in the third-cut, “I Could Be” comes out her strongest so far overall, but the rest ended up slightly compromised this time around. There are a few words that she pushes, pulls & drags through the second-verse of “I Could Be,” which was almost surprising given how spot-on she’s been verbally in the metering throughout the Visions EP so far. I really, really like her whispered-tone on the hook of this track…and bar-none, she’s written three-tracks that could easily have hit-potential with very minor tweaks to make’em perfect.

“414 Come Up” was one of my favourites for sure…really dig the electro-beat and atmosphere of this shout-out anthem to the 414. After a bit of wild’n’out on the first-verse, Hailey puts the rest completely in-check to deliver confidently throughout the rest of “414 Come Up.” With talented lyricism at the core once again, but with a bit of added energy, edge and menace to the overall sound…this track starts out the second half of the Visions EP with a strong & solid authority on “414 Come Up.”

OKAY…hold the freakin’ phone…I just got a WHOLE NEW SET of information when I listened to “Life I Chose” – there’s something you’ve got to know that I honestly hadn’t realized yet. I had mentioned earlier about Hailey finding her way as an artist still…but I did NOT realize she was only fifteen? My mind just imploded! Any slips in tone, metering…shit…pretty much ANYTHING are pretty easily forgiven when you take that into account…FIFTEEN? That’s beyond incredible. Hailey’s grip on song-writing at this young age would take most emcees twice her age right back to school and heading to the back of the class. If she’s this good now – it’s not going to take long for this lady to find her way to that success she’s heading clearly towards at all.

And all that new-info aside, “Life I Chose” is a strong tune on the EP yet again. After a smart piano-intro, the track busts open into a theatrical-sample looped to really create an entertaining sound. Another incredible set of lyrics weave together fantastically and really put Hailey’s penmanship to the test as she ponders on the direction that music will take her in life.

Because once they realize that you can adapt to pretty much any environment, beat & atmosphere, and realize the range of talent & potential you possess – the smart people are going to move-in to get you signed-up my friend. “Clouds” is a perfect example of what I’m talking about. Not only does this song work entirely well as a standalone track, featuring the beautiful voice of Elan Noelle providing the hook and some of the best lyrics from Hailey on the entire EP – but it also proves that she’s been thinking about the flow and layout of the Visions EP all along as well. “Clouds” wraps up the themes that have been a part of the entire mixtape with a flash-forward view to what life could be like when that success is achieved, and how incredible it will be to look back to days like this where it was all first coming together.

And you know what? She’s right. I confirm it’s completely awesome to be older and look-back at the days that made you who you are – and I’d be willing to bet money on Hailey getting there someday to do just that one day herself. But while I can confirm that nostalgia is indeed a magical-mirror’s glimpse into the past – I can say with confidence there’s no person on earth that wouldn’t truly want to go back to actually LIVE in the moment like Hailey is right now…we all would; ask yourself deep-down…you know you would. To be an artist like Hailey Simone with the talent & skills she has…and that much LIFE still in front of her…it’s incredible. She’s put in the hard-work and effort of a veteran on the music-scene already at her extremely young age…to think she’s only going to get stronger & more confident with her place in music as she evolves as an artist…I’m just sayin…watch out people…the best is yet to come; this is one hell of a start and a memorable experience hearing Hailey Simone.