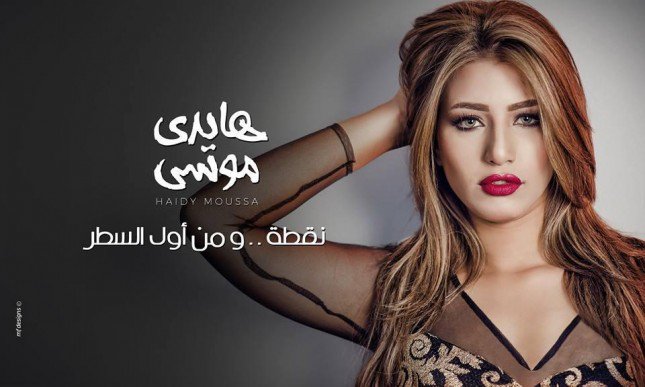 Sometimes it’s impossible not to just sit back and marvel at some of the incredible opportunities that come our way here…there’s just no telling where the adventure leads to next, know what I mean?  I believe this is the first time I’ve ever had the privilege to review a song in the Arabic language…at least I think that’s what it is, I’m honestly not 100% sure.  It appears that Haidy Mousa is just getting her career started…the pages and social-media are being created and built around the growing support for her music; there isn’t a ton of information out there on Haidy yet…but I’m thinking she’s potentially from around the area of Egypt from what I’ve been able to find out there in the research I’ve done.  It’s certainly a new sound for me here on my playlist regardless of where she might live in the world or be based out of currently…and I always appreciate hearing something new for the first time.  Almost hard to believe really…I’m sure that Haidy has grown up around similar sounds throughout her entire life and certainly been inspired by them…yet to myself it’s pretty much an all-new experience.

I mentioned already that she’s just currently breaking onto the scene and that there’s not much info…in addition to that we’re just getting a sample-loop of Haidy’s song “No’ta W men Awel El Satr” through the YouTube link below…unless the song is just broken-up into strange pieces somehow…sounds cut/looped to me.  You get a solid glimpse of what’s upcoming though…there’s beautiful and exotic instrumentation and of course, Mousa’s beautiful voice as it sounds in both the song’s verse and chorus.  The verse has her in more subdued & subtle tones and sounding sleek, warm and inviting as the music builds around her.  Great horns, excellent percussion and a very chilled out atmosphere throughout, Haidy has a solid amount of expression and passion in her voice that rises to match the energy in the music…I like the gentle beginning and how she eases us into this easy-listening vibe, and I think she sounds great in the chorus as well when the atmosphere rises around her voice to create a bigger, fuller sound to the hooks in the song.

Though I don’t know the language it’s written in, I still feel like you can identify the sincerity and emotion in her voice as “No’ta W men Awel El Satr” begins and that the verse connects with its melody, tone and mood to any set of ears that would listen.  The chorus sounds much more exotic in its brightness & rhythm…and I think for some out there that aren’t too familiar with ‘world-music’ might have a tougher time with it, but I think there are more than enough people out there that have an open-mind & experimental-curiosity when it comes to music that she’ll be able to potentially open the door for many to experience something brand-new to them.  Haidy’s already going about it all the right way by releasing this sample of “No’ta W men Awel El Satr” into the online world so we can all get an idea of what’s to come.  With well over a million views on the sample of the single so far…it’s pretty safe to say that there are certainly a lot of people looking forward to her music, no doubt found all across the globe by now!

So for me personally, a lot of liking this one came down to the newness of the experience overall, but also credit to Haidy for putting out a bold, confident performance and entertaining song to listen to.  While it might be a distant cousin of anything that’s currently on my playlist, I always tend to embrace the unique – and in my world, Haidy certainly qualifies.  I think she’s got a beautiful voice and you can certainly hear the talent she has.  As a bonus, I think “No’ta W men Awel El Satr” also has enough rhythm and hook to potentially peak the curiosity of the people out there to give her a shot and have a listen.  She’s got sincere melody and emotion in her voice, notable confidence and an overall sound that’s bound to grab the attention…and I think if you really listen closely to amount of skill, beauty and talent she has, you’ll certainly be curious as to what she’ll sing for us next.