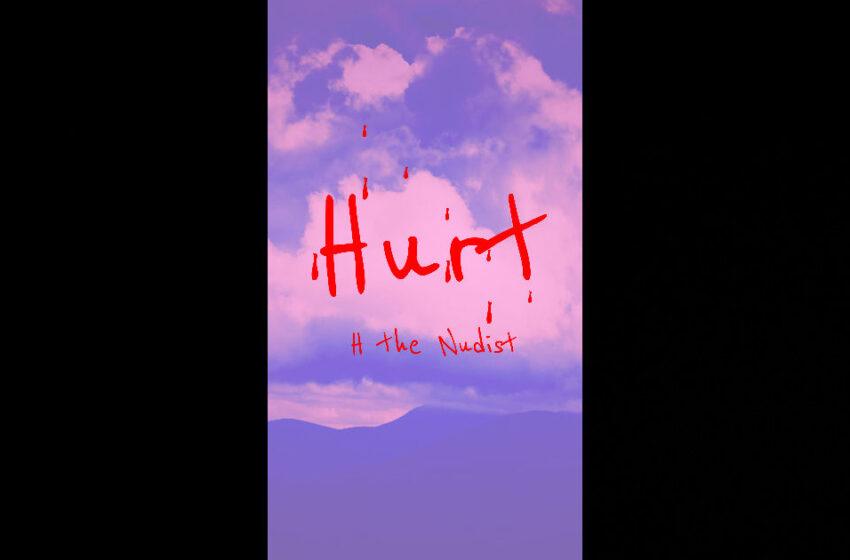 There are times like this, where even if I’m not entirely sure about what I’m listening to, I’m 100% in favor of it.  Don’t get me wrong…sound-wise, I’ve always got an idea when it comes to any song…I don’t mean I’m not sure about that…it’s more of a comment on how it would be really tough to pin down H The Nudist to a specific style or genre, given that what he’s creating is so genuinely artistic and unique.

I mean…he name drops Papa Smurf in the very first line of “Hurt” for one thing, which I’ll admit, was entirely unexpected and definitely caught my attention.  As it carried on, things that would universally appeal to us all – the authenticity of his accent, the wonderful singing that takes place in the chorus, the mix of endearing sincerity & evocative sound in “Hurt” all around…the perspective that H The Nudist puts forth…it’s all far from any kind of typical tune, but you get that feeling of hearing something authentically special unfolding as this new single plays on.  The most you’ll find me conceding to ya is that there’s somewhat of a soliloquy-style of theatrical sound goin’ on, which may or may not be your jam…I’ll admit, usually once we start heading towards something that would work in a musical, I’m usually out myself – but I truly like what I’m hearing in “Hurt” and how fearless H The Nudist is when performing, and the perspective he writes with.  “Hurt” is a stellar example of a song with plenty to say, that contains a relatable message at its core that’s bound to connect to a whole lot of people out there.  Cycling through a smart way to tie-in colors to emotions, and containing a sincere sentiment that radiates an innocent & pure vibe that’s direct, honest, humble, and massively moving to experience – “Hurt” is a real triumph when it comes right down to it.  Not only does it prove that H The Nudist is an artist that truly has something to say, but it’s rare to hear someone dare to color so far outside of the lines of what we usually hear out there on our playlists & on the charts, and perform it so confidently.  That’s where the real magic is here in my opinion…”Hurt” reveals an innate connection to making music in a way that connects to us – no matter how different H The Nudist may appear, there’s a realness in the songs he’s writing that can’t help but appeal to our humanity every bit as much as keep us engaged.  I’m thankful I don’t have to choose between whether or not I like the spoken word of the verses or the singing in the chorus and get both in one song…there’s really no way I could do it.  I think the natural accent of H The Nudist has all-out stunning texture to it, and the singing is fantastic.

“Same Difference” wasn’t like…hmm…how do I put this?  It’s not like it was a complete 180-degree turn from what we hear on “Hurt” when it comes to the cleverness in what H The Nudist wants to say or how relevant his point of view is – it’s just presented to us in an entirely different way.  And I ain’t gonna lie to ya, conceptually, “Same Difference” could still very much fly right over the heads of listeners, even though the point that H The Nudist is making overall, is essentially right there in the title.  Honestly, of the two tracks he’s released so far, I’d imagine that it’s gonna be “Same Difference” that makes the biggest splash in the court of public opinion…I might think personally that “Hurt” speaks a lot more strongly on behalf of the art that H The Nudist is creating and the uniqueness that exists within him & his music – but I’d definitely say that the energy & bounce to “Same Difference” has very widespread appeal.  You’ll hear WHY I started out this review like I did though the moment you push play on this other single H The Nudist put out, last year at some point…everything about it radiates a completely different vibe than we experienced with “Hurt” and reveals a tremendous amount of versatility in his sound & style.  That’s always going to pay off on a creative level in the long run, for H The Nudist as an artist, and for us as listeners…I can already guarantee you after listening to only two songs, that every single time you hear something new from this guy, it’s bound to be different than what you heard last.  As strange as it may seem at first in what he’s saying and how he’s chosen to say it…fundamentally, at its core, “Same Difference” makes a ton of relevant points in communicating how much we’re driven by the same motivations and in many ways, we’re all the exact same person, doing the same things, but at different times in this experience we all call LIFE.  I’m impressed!  I’m not here to tell ya that H The Nudist is what you’d normally find on many playlists out there…but shouldn’t that be something we all celebrate?  We need music and creativity in action like this guy combines in these songs – there’s real art being made in what H The Nudist is making, and I’d imagine that’s gonna earn him many dedicated fans that remain loyal as he reveals significant breakthroughs with each release throughout the years to follow.  I might not know WHAT it is he’s up to overall, yet…but I know what something different enough to earn your attention sounds like, and H The Nudist is stocked with a ton of that good stuff for sure.

He’s a crafty dude!  I very much dig the fact that I couldn’t possibly tell ya what he’ll come up with next.

Listen to music by H The Nudist at Spotify here:  https://open.spotify.com/artist/59bPsVSvETMAM9KD6gJhvV