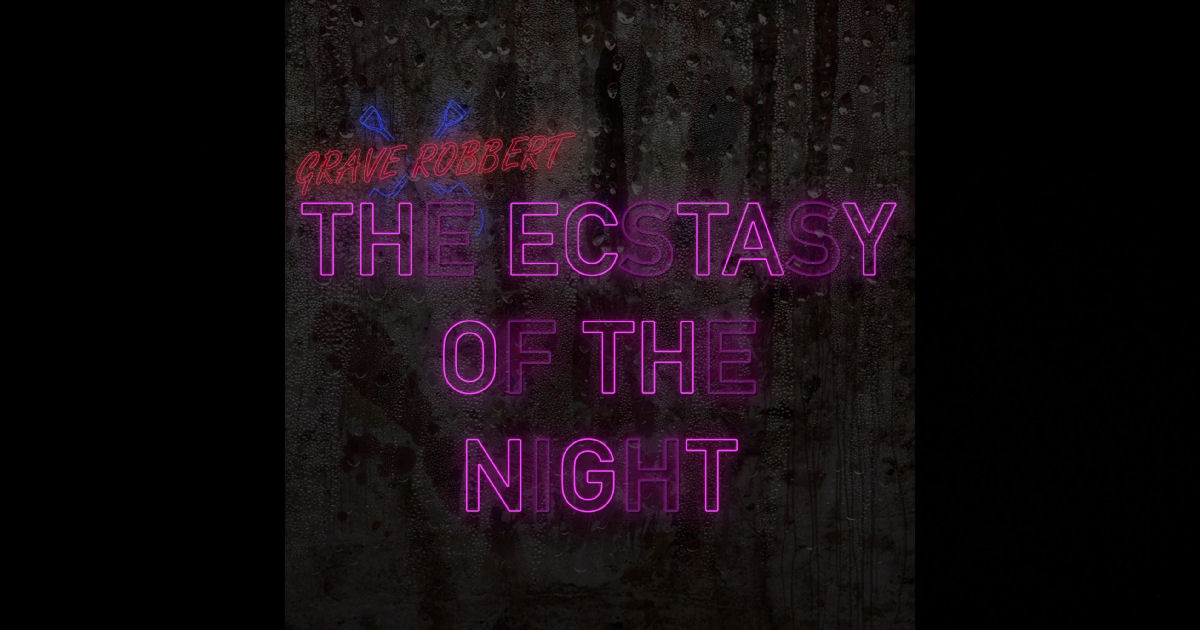 Certainly doesn’t take this guy long to get goin’ does it?  Rob Grave of Grave Robbert is back in action and sounding in fine form on the brand-new single “The Ecstasy Of The Night” featuring Eloise Kerry.  As crunchy, amped-up, and intense as we know & love this project to be, Grave Robbert gets the energy turned up to eleven immediately & never backs down one degree of scorching hot sound from there.

Lots of great elements that stand-out provide the wild ride through “The Ecstasy Of The Night” and Rob’s relentless desire to fill the lefts & rights with a scathing sonic experience that’ll melt your speakers all stacks up to a furiously entertaining listen to the new Grave Robbert single.  You’re going to notice the guitars & drums likely first…kind of impossible not to – you’ll instantly find yourself in the thick of a serious onslaught of sound, surrounded completely.  You’ll likely also notice the crisp venom in Rob’s vocals throughout this song…call me crazy, I know he’s always into what he’s creating, but he really sounds a bit extra fired-up when it comes to how he rages, surges, and seethes over the mic on “The Ecstasy Of The Night.”  Then there’s the addition of guest-vocalist Eloise Kerry, who makes an essential appearance in this song, and though she never steps directly into the lead, she makes a huge impact.  All of these things stack up real, real nice…gnashing & thrashing out together, sparking up the energy with backing vocals to stoke the blaze and add the emphasis over the mic that matters…Rob’s got this all laid out in a way that continually engages.  Whether it’s his own backing vocals, smart moments where it sounds like he’s dipped just slightly into the effects as well, or the stunning & surreal way that he’s got Eloise’s vocals flowing in like she’s drifting in on the wind on into the chorus…from the music to the microphone, Grave Robbert’s put the work in here to make sure no one ever even remotely gets bored.

I love that instrumentation & musicianship remains such a large part of the Grave Robbert sound on “The Ecstasy Of The Night” & that Rob himself never seems to compromise quality in that regard, ever.  You can hear what a beast this guy is on the guitar that runs vibrantly throughout the lead on this new single; Rob’s a virtuoso when it comes right down to it, he’s simply chosen to go in a decidedly different direction than the bulk of the guitar-gods out there with the harder-edge of Grave Robbert’s music, but believe me when I say, you’ll always audibly be able to hear the kind of skill & talent in how he plays that tells ya he could definitely hang & hold his own with a ton of the best of the best out there today.  If you dig on your Hard-Rock, your Heavy Metal, your Progressive cuts & Horror-influenced vibes – if any of those ingredients pique your interest, you’ll be on more than fine to listen to this at maximum volume.  As for the rest of ya out there…I mean, get some music-culture in ya will ya?  Crank this up and experience what the other-side of sound is like if this ain’t your normal dealio…you might just be surprised at how much you end up getting into the massively menacing single that Grave Robbert has here.  The structure moves extremely rapidly and continuously pumps out enormous sound you couldn’t possibly miss…”The Ecstasy Of The Night” ain’t exactly for the faint of heart, let’s put it that way.

All-in-all though, definitely not the kind of cut where anyone ends up taking away points for what you’ll hear inside this performance, idea, and overall execution – Grave Robbert is a project of spectacular quality, and it flexes that strongly & confidently throughout the maddening intensity of “The Ecstasy Of The Night.”  Very impressed with the use of Kerry’s vocals and how much of a hook they become, even when relegated to the background, she still stands-out perfectly and adds a ton of highlights to this tune through the haunting grace & fallen-angel like sound she brings to the chorus as she sings alongside Rob.  There’s a lesson to be learned in here somewhere…even with as much going on as there is ALL of the time, there’s still an impressive use of space and a great understanding of what makes the dynamics of a song really stand-out to our ears for all the right reasons…Rob’s got this cut laid out right & reveals each element of “The Ecstasy Of The Night” in ways that your ears will seriously notice, and justifiably appreciate.

Find out more about Grave Robbert from the official page at Facebook here:  https://www.facebook.com/GraveRobbertBand