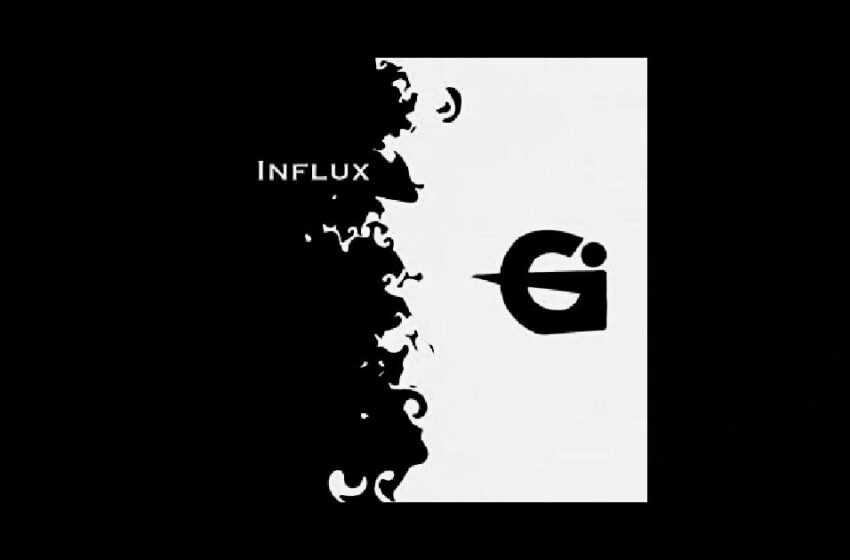 Lemme ask y’all a legitimate question, but a leading one all the same – is there anything better than finding a song that just slides straight into your ears without hesitation?  I’m all for the creative & unique, don’t get it twisted…I like a track that’ll challenge what I think I might know about music too – but every so often, you’ll find a song like “Influx” that’ll not only manage to be both of these things I’m talkin’ about, yet also manage to find a level of universal accessibility that can be absolutely staggering.

So…while I’m mentioning ‘without hesitation’ – “Influx” was KINDA like that for me, and kinda not too if I’m being honest…but that’s all due to my own personal quirks and not on this collective crew of talent.  The way the opening guitar seemed to drop off or get muted so quickly at the end of each strum was MESSIN’ WITH MY BRAIN – but credit where credit is due, it immediately cues all our ears into knowing we’re about to be in-store for a sensory song & a whole lotta audible uniqueness.  Which admittedly, is a real staple of the Granular Injections vibe altogether and has been ever since I started listening to this project way back whenever it was.  Anyhow…you get the point – the mix in the intro will inform your brainwaves that there’s more than meets the ears goin’ on in “Influx” – and all this being said, I’m pretty much 100% positive I was fully onboard by the time this song was about fifteen seconds in.  I KNOW that I was definitely hooked beyond hope before “Influx” met the end of its first minute when the chorus was revealed…and I think any of ya listening out there will have the same reaction to it.  In the grand scheme of things, that really ain’t LONG y’all…fifteen seconds to sort out what the heck might be goin’ on only to KNOW that you’re gonna LOVE the rest of what you find, instantly, is not a bad trade to make.  To me, if your brain can KNOW how much it’s gonna dig something on the inside of merely fifteen seconds – that IS ‘without hesitation’ essentially – this whole crew should be proud of how quickly they get us locked in.

Ain’t a matter of sound to begin with anyway – I like what I hear, I was just trying to figure it out I swear!

I love the way the music starts to fill out with the digital vibes of Granular Injections joining the acoustic guitar, and Damien Q absolutely rocked his moment when he opened the song up from the mic into a whole different artistic realm as “Influx” snapped into place.  There’s a very Bo Burnham type-vibe goin’ at the start…the more serious-side of his vibe mind you…but that’s certainly where I’m at & I’m here for it – I felt like “Influx” was brilliantly designed to be the real gift that keeps on giving as it plays.  Granular Injections…like…MAN…congrats on finding one THE hooks of 2022!  The chorus of “Influx” becomes the major payload you wanna hear as a song shifts & transitions, taking what began as an artistically-inclined vibe into a realm of accessibility in tandem that’ll blow your freakin’ mind.  No joke – this is what I’ve been gettin’ at when I’ve been saying ‘without hesitation’ – it’s the kind of hook that immediately gets ALL of your attention, and fully deserves it.  Joe Backer’s acoustic guitar solo is righteously kick-ass, the reverse guitar solo from Eric Tang is equally rad – they more or less share an overlapping moment of verifiable instrumental awesomeness that adds additional diversity and radiant levels of addictive sound to this shiny new tune that you’re gonna love every bit as much as what you hear from the microphone.  With each subsequent spin I put into the digital grooves of “Influx,” the more I was convinced I loved every damn thing about it.  The details put into the background & in the effects are straight up genius – and for as relevant as a track like “Influx” is today with the Indie/Emo vibes being created out there right now, I felt like Granular Injections offers a spin on the sound that’d be nearly impossible to duplicate.

Lyrically it’s got perspective and “Influx” is as insightful as it is creative in that respect.  I’ve heard this collective crew of talent assembled in many different configurations over the years as I’ve been checking out their music & reviewing it here on our pages…and I’m inclined to say that THIS is the combination they’ve been searching for.  Everyone contributes something remarkably memorable and significant to this tune…their vision & integrity is fully intact with this song’s artistic uniqueness & amazing attention to detail, and the level of accessibility generated through the main hooks of “Influx” is at an all-time high.  So YES…huge thumbs-up from me to this ENTIRE tune…a couple spins & it all made as much sense to my ears as any tune ever could…Granular Injections leads the way to a massive WIN with “Influx,”  and the collaboration all came out to crush it with their A-game in support – you’ll all be diggin’ this single as much as I do for sure.