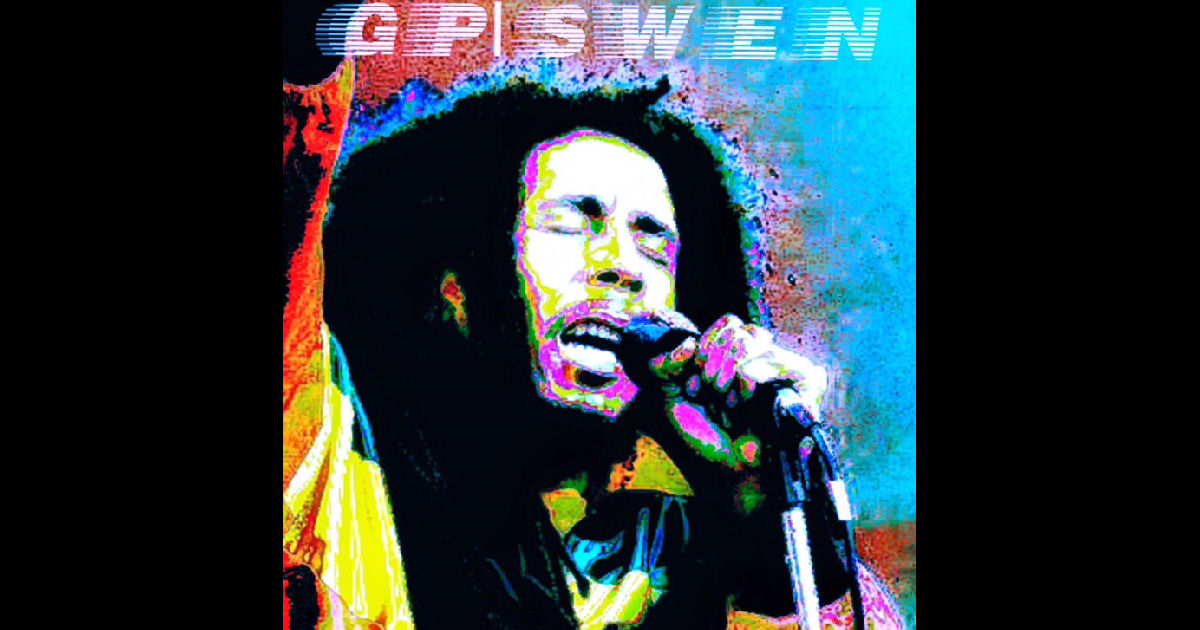 Well now…this emcee is havin’ some fun ain’t he?

Whether or not Gp is trippin’ out farther than you can travel with him, that might be another story.

Put it to you this way…you’re not gonna find too much out there right now that’s gonna remind you of or be similar to what Gp’s creating right now.  Y’all trail blazers already know – carving that place out in music is a tough thing to do…not following the flow of what everyone else out there is doing can be a major advantage in setting one artist or band apart from the rest, but of course, it can also sometimes take a supremely savage amount of time to catch on.  Is the average everyday listener out there going to be able to wrap their minds & ears around what Gp’s created here?  Probably not, no – but I don’t need to explain to Gp what I’m sure he’s already gotta be well aware of.  He’s venturing into a real niche of his own here, out in left-field at the very least, if not floating out there in his own galaxy of music waitin’ on ya to fire up your own rockets (I.E. that greenery yo!) to come & chill with him for a minute or two.

I’d honestly be interested in how other people react to this record for sure…in my mind, as short as it is, there’s no doubt to me that this would be asking a lot out of the everyday listener, despite the 100% enticing sound of the playful electro atmosphere at work on “Lone Le.”  Right off the drop, that brightened nearly video-gamish vibe starts pullin’ ya in – and with the wild sequence it has, it’s already a lot to absorb, let alone once Gp starts taking on the vocal duties as well – at that point, either you’re hooked within the grip of the colorful sound & hypnotic loop created, or you’re lost in a maze of sound you might very well never find your way out of.  Who’s he gonna call when he’s horny?  I dunno!  Probably not me.  He doesn’t get too specific on that really.  Sounds like his options for poonani are plentiful and that he’s not really too “Lone Le” at all, you dig?  There’s a difference between being “Lone Le” because you just haven’t got around to dialin’ up some yet, and just straight not having any options at all bruh, just sayin.’  Either someone out there is the only one for him, or EVERYONE out there is the one for Gp – the situation isn’t exactly clear…but sure, you can call “Lone Le” a love song if you like.  It’s like Psychedelic Electro with Hip-Hop laced-into the vibe…sonically, I think the sequence alone will make an impact on listeners out there and immediately create that line in the sand from the speakers as to who’s gonna jump on Gp’s bandwagon & ride this one out, or who’s turn it is to leave the island.  There’s a lot of repetition goin’ on, but enough diversity in the mix, sound, and editing on the vocals to keep your attention…and overall, as a first impression, I mean…you really don’t hear much out there like this at all…and in that sense, “Lone Le” definitely becomes a strangely odd experience you’ll remember.

“Lookin” takes Gp out into the wild west of THOT territory, workin’ a rhythmic line in the vocals and takin’ it for a serious ride through the autotuner to create the vibe of this second cut while the scattered & frantic electro sounds bounce around him.  Again, if you listen to the main pattern of electro melody, you’ll hear it’s tricked-out in a crazy way that works timing & tempo into a frenzied but controlled insanity…at its most intense, there’s no doubt that the movement of the way Gp creates music is gonna throw more than a few people off for sure, or at least have them asking WTF just happened by the time it’s all said & done.  It becomes tough to evaluate an artist as significantly different as Gp is…one of those genuine cases of is it genius or is it madness – and with rare space in between those extremes for any argument for anything else, it’s either one of those two and each person will hear it in their own way.  On the good news front, I think Gp and a track like “Lookin” are what you’d call polarizing for sure – and that to me, is always the sign of something good in the works, either now or for an artist/project’s future potential.  Essentially, as long as people are feeling one way or the other, it doesn’t matter; what matters is that they feel SOMETHING towards it…even if they don’t like what they find, still doesn’t matter – people will TALK about something like the Swen EP and have a serious opinion they’ll stand behind when it comes to what they hear.  And ultimately, that back & forth discussion, trying to figure out if it’s JUST weed that can set an artist wild’n’out like you’ll find GP doin’ on “Lookin,” or just what the hell this emcee is really all about, or what he’ll be like in the future – the people will be talkin,’ because something this far out of left field always creates conversation.  Conversation & critiques lead to more art, more interest, more buzz, more word of mouth, and more music – all that’s good stuff.  I have the feeling (and I ain’t no Nostradamus) that we’ll never really know what to expect next from Gp.

“Swen” – now there’s an acronym I can seriously get behind!  Perhaps the wildest cut of the bunch in terms of how far out this track will roam, “Swen,” aka Smoke Weed Every Night, is…well…I mean…it’s one of those cuts that you honestly don’t end up creating unless you really DO smoke weed every night, you feel me?  He’s keepin’ the vibe real loose on this one, workin’ his way around a hypnotic-melodic combo that’ll get you sucked into the words hard enough to think you’re going to the sunken place.  And man, I tell ya…if I told ya the cold facts on how many “Swen” style songs are found throughout my own catalog you’d just shake your damn heads…it’s kind of the ultimate combination of hobbies in my opinion.  Smokin’ weed, makin’ music – that’s the life, ain’t it?  I know I’m not askin’ more from my day-to-day – we’ve got this completely in common; I’m cool with that combo and it certainly sounds like Gp is as well from what you’ll hear on “Swen.”  All that being said…I also know how much I go back now and listen to those records where I was the most high on…and how much I don’t as well.  Gp is one of those rare artists that you honestly can’t get a 100% read on throughout listening to the Swen EP – you can tell he’s actually got quite a complex mind when it comes to structure and assembly in his material, but at the same time you’re bound to raise a few eyebrows along the way in wonder at how much he’s invested himself on a serious level as well.  And while I’d love to tell ya that any experience I have personally might shed some light on that…I got none to give ya…I’m as curious about what Gp is up to when it comes to the long-game as well.  Again, I think if you listen to the timing & tempo of the music and how Gp puts himself into the mix on like, a whole separate level & pattern with the vocals that nearly works against the grain but with the flow somehow, you’ll find there’s something here.

I’ll be damned if any of us, myself included, could really define WHAT it is though.  Gp’s doin’ his own thang – and ultimately, whether I ever ‘get it’ or not at first, I’ve always got a lot of love for those that are willing to blaze their own trail.  Is it gonna set the nation on fire?  Probably a bit too complex & designed for us stoners to really hit it that way – but you best believe that more than a few blunts will get twisted as the Swen EP gets bumped out there in more places than ya might think homies – sparking-up the nation with creative inspiration is an achievement to be proud of as well y’all.

Find out more about Gp at his official page at Instagram:  https://www.instagram.com/gp_music