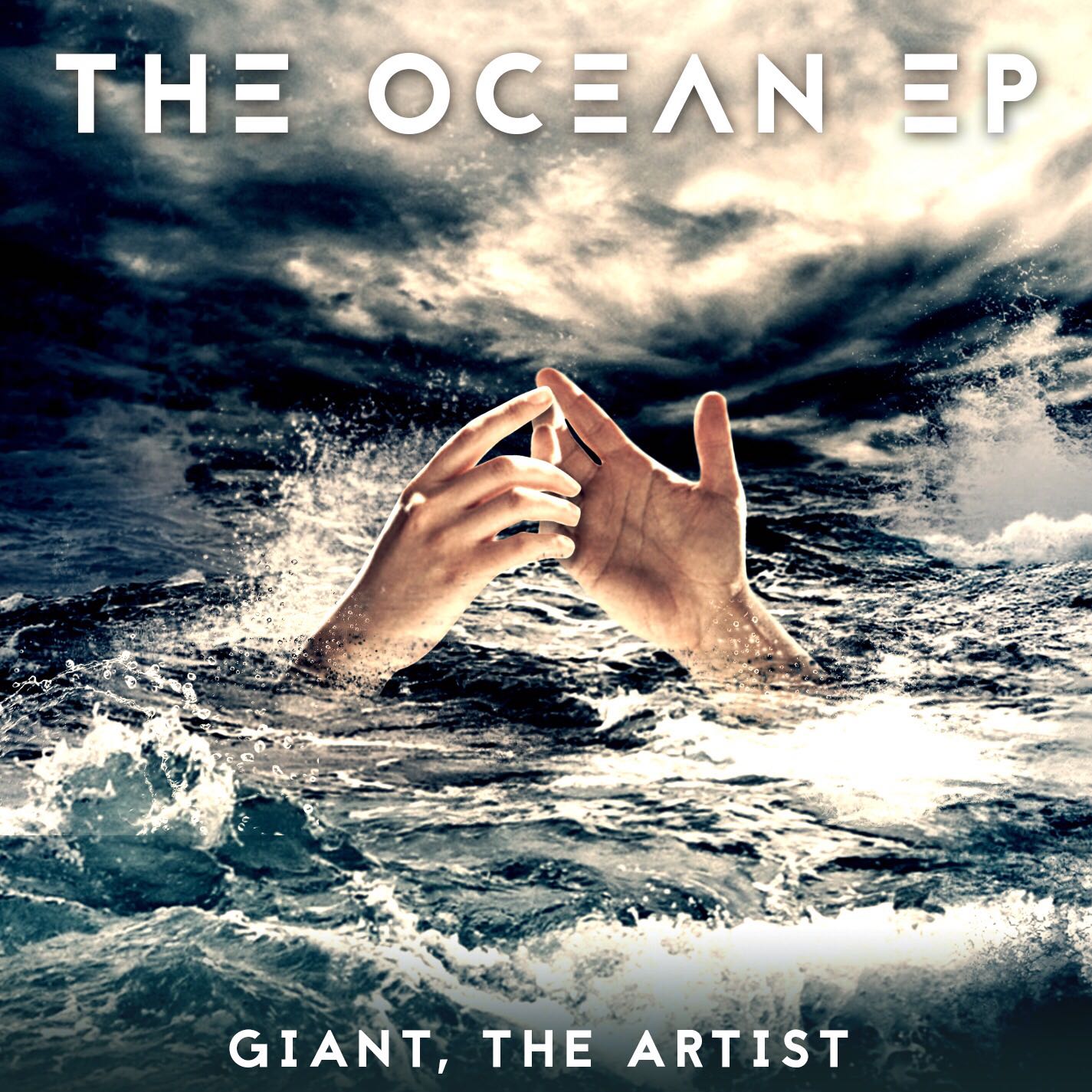 Certainly haven’t forgotten the impact this mixtape-master released the last time out when we reviewed GiANT, The Artist’s record HiberNation – that album smashed all-expectations and of course, raised-up the hopes and expectations for what might come next from this innovative creator.  Over nine-new tracks on The Ocean EP, GiANT, The Artist quickly reminds us why it’s great to have him back.

After a spooky sounding “Introduction” that’s full of haunting samples that lay out some of the concepts/inspiration behind The Ocean’s title – and it goes deeper from there immediately.  GiANT, The Artist has put together an incredibly powerful, emotional composition on “Let It Burn” as the songs on the record begin.  Much of this record seems like it contains therapeutic and self-healing mechanisms that have allowed Joshua Giant to really personalize this album in ways that make huge impact.  “Let It Burn” is a perfect example – and right away GiANT, The Artist keeps the flow rolling as he fills bar-after-bar with relatable emotion and energy in his observations.  The additional vocals of Lizzy pretty much make for some of the most stunning moments on “Let It Burn” – she sounds incredible with GiANT, The Artist in a combination of talent & tone that truly works.  Lyrically, “Let It Burn” is tough…you can feel the weight of the world that GiANT, The Artist has kept on his shoulders and the melancholy of the sentiment and sound really feel heavy in their words, mood and emotion.  Really loved the sound of these two sets of vocals together – that’s a seriously winning combination that worked perfectly.

Overall, GTA sounds seriously invested in these words.  Listen to “I’m The Bad Guy” and you’ll hear from the added venom in his delivery that he’s past his breaking-point and here on a new record because he’s really got something to say.  Much art is inspired by emotion, tragedy & setbacks along the pursuit…and I think the focus you can hear from GiANT, The Artist echoes the kind of determination to ‘get it all out’ that you can hear in situations like these that those feelings bring about.  Depending on the response & reaction to some of these songs…he may/may-not learn that it can be difficult to continually bring up feelings he might well move past from as he pursues his career.  He might not want to revisit a song like “I’m The Bad Guy” year after year as he continues to grow, despite its big-hooks, perfect production and addictive-rhythm – know what I mean?  The content is extremely personal, pointed & sharp – GiANT, The Artist has taken a few wounds along the way, but a track like “I’m The Bad Guy” shows he might have been down – but he’s far from out.  It’s a great glimpse of the internal-struggle and the fine-line we walk to balance our relationships with others through GTA’s experience and perspective.

“Jet Lag” is a little on the sleepy-side as the title itself might suggest.  GiANT, The Artist remains on-point and keeps his flow solid as you’d expect him to – but I’ll admit to the hooks in this cut being less strong than the rest we’ve heard so far.  Still a good song – and one that proves GTA is much more of a lover than he is a fighter – but “Jet Lag” never really pokes out of the clouds as it takes flight.  It’s a solid vibe that stays chilled throughout, but much more of an ‘entire moment’ in time as opposed to the versatile nature of what you might typically expect in the writing of GiANT, The Artist.  Lyrically, it’s again as tight as you’d expect from GiANT but the message and imagery have a harder time making their impact through the melancholy attitude in the music of “Jet Lag.”

And I think right away on “Therapy” you’ll get where I’m coming from.  “Therapy” has got much more of a life & pulse to it despite the pain & agony outlined in the music…there’s real vibrant clarity to the music & lyrics of this cut.  GTA might be more scattered upstairs than he’s ever been emotionally – but this emcee has his shit together, let me tell you.  Excellent lyrics to “Therapy” – and overall all the way through this record, GiANT, The Artist has proven once again that he goes into the studio well-rehearsed and ready to roll by nailing his performances.  He bounces and snaps to the beat and syllables of his words with precision and a truly professional approach.  “Therapy” gets the music moving again, bringing up the energy on the record right before GTA throws it down on the subtly-explosive “Calling Cape Cod (RIP Tommy).”

“Calling Cape Cod (RIP Tommy)” is the kind of song whereby title-alone you can assume will be an important one…a song where GTA will be absolutely, 100% forced to bring out his very best – and I don’t think a single person out there would argue that he does just that on this extremely personal cut from the deepest parts of The Ocean.  It’s got that impactful approach that worked for Kanye on “Jesus Walks” – but that’s not the only thing that will impress you here – this track hits home in every way.  From the incredible emotion and power of the words in “Calling Cape Cod (RIP Tommy)” to the intensity of the beat and music supporting him – GTA sounds completely committed to the lyrics here…sincere as it gets – he means each and every word that spills out and you can HEAR the conviction in his tone.  Written presumably about the tragic passing of a great friend and the madness of the emotions that surround such an event – “Calling Cape Cod (RIP Tommy)” delivers from every angle of its tribute.  Another track to feature female backing-vocals, this time from Amber – she makes the atmosphere have real depth and dimension to it through the beautiful & angelic, fragile-tones in her vocals…definitely a combination of sound that once again works incredibly well for GiANT, The Artist on The Ocean EP.

I also thought “Different” was a real highlight.  I loved the way he chose to phrase and meter his rhyme to this track…it WAS “Different” than the way he approached the rest of the record and the way he bent the words to fit to the music was great!  Really liked the casual beginning where it’s got random conversation before it gets into the difficult relationship between that great party last night and the reality of that tough next morning.  “Different” has a seriously hypnotic groove to it…the beat is minimal but completely perfect from point-A to point-B, setting a haunting and mysterious mood for GTA to work his magic over.  One of my favorite cuts on the record lyrically and one of the most fully-realized ideas he’s caught on this entire EP in my opinion.

Also in my opinion…I feel like what I was missing in “Jet Lag” earlier on in the record, GiANT, The Artist captured, caught and delivered on “Virginia Beach Interlude.”  At only two-minutes-plus in length, the amount of emotion in this track is seriously impressive.  Through a forlorn piano, GTA details the tragic nature of relationships and The Ocean-sized amount of emotions contained within them.  All the imagery in the words of “Virginia Beach Interlude” project & resonate powerfully…you might not expect it, but be ready – GiANT, The Artist stands to induce a few tears from this emotionally-intense interlude.

The feelings, thoughts and emotions that have been slowly heating to a full-boil come to conclusion on the album’s final/title-track “The Ocean.”  Fully reflective, personal and introspective as it examines the difficult moments and tragic situations that fuel much of the content of the writing on this record – GTA lays out how real the daily struggle still is, as life continues on.  You can’t help but really feel this entire record…how heavy and REAL these emotions are…”The Ocean” exemplifies the validity of writing like this – people connect and respond to music that sounds this true to itself…this real.  Jimi Jones lends an assist to the dreamy nature of the chorus…great production on this track and use of atmospheric elements like waves crashing in the background…”The Ocean” is a perfect summation to this record and really drives home the impact the experiences that GiANT, The Artist has gone through and how they’ve affected him.

I hear a record like this and know that it NEEDED to be made.  If GiANT, The Artist was to continue on – these were thoughts and feelings he NEEDED to get out in order to do that.  He’s done a great job of keeping the material engaging & entertaining while still getting out everything he’s needed to say – and that’s not always the natural result of a project so personal.  Quite often what’s most important to us to express musically is where an artist or band falls slightly short due to the added weight of the message or meaning behind the material – but that’s not the case here at all.  GiANT, The Artist rose to this occasion with bold strength and courage to admit & spit out feelings & emotions as powerful as these are – I think it’s music that will resonate strongly with many people out there and that The Ocean EP contains tracks that show the real depth of thought behind the creativity and writing from this emcee.