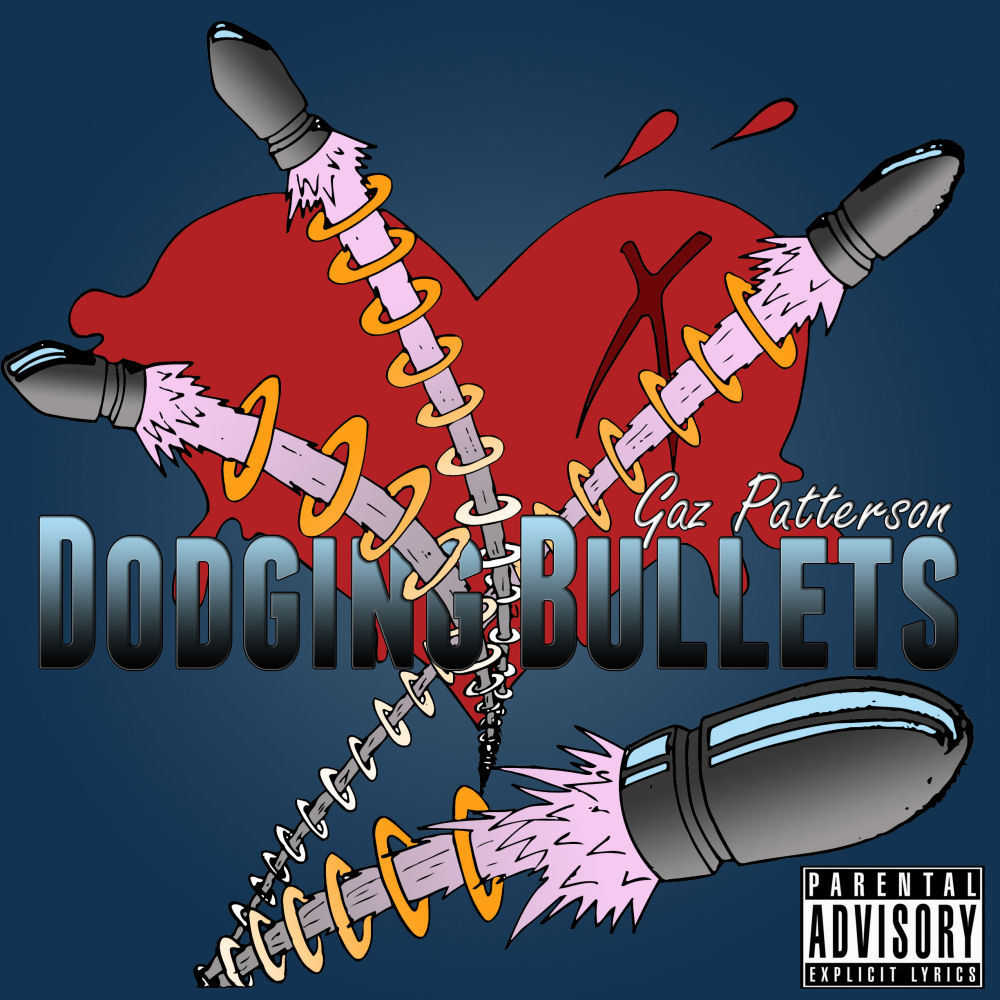 There are a couple of very interesting methods you can use to listen to the new album from Gaz Petterson of the UK. You could listen to it for the energy in these tightly-written pop/rock tunes…in fact, if you put it on and press play you’ll find it plays through quite easily! OR… You could listen to this album and realize that everything you’re hearing on Dodging Bullets was put there directly by Gaz himself, who astoundingly has put this entire album together DIY style. When you listen to it with that in mind…it takes this album to a whole other level.

Now…had I not been told that directly, I would never have known until I did my normal research through his social media. This album sounds completely like a vibrantly full band; I’ll fully admit I would have been fooled completely. I often ask people if it’s possible to be a ‘Jack-of-all-trades’ without becoming the master of none; I’m going to retire that question now that I’ve found the living proof in Gaz Patterson.

Cause like…I’m SORRY Gaz…but it’s just WRONG for you to be THIS TALENTED on all those instruments!

In listening to Dodging Bullets, I literally can’t decide which of the instruments I like him on best – and that’s a true compliment. Understand that in nearly 99% of the DIY projects out there where you find someone completely solo, you’ll hear the weak link somewhere. Maybe their bass isn’t as sharp as the guitars…maybe the drums should have been electronic…that kind of thing. These flaws are non-existent on Dodging Bullets; it’s truly fantastic to listen to this album and KNOW that it was completely one dude.

The drums are just fantastic; opening track “Into The Sun” sets a huge standard in energy right at the beginning of a spin through Dodging Bullets. Musically, Gaz has zero hope of escaping relentless Blink 182 comparisons – there are many that could be made. From those quickly beating drums to the frantic guitars & bass, to the melodic vocals – Gaz is building upon the formula that Blink 182 left behind. And let’s not forget – Blink 182 was a BAND…Gaz is a PERSON…ONE guy! To pull off the sound of an entire band as effectively as Patterson has on this album is truly nothing short of amazing. Power-packed songs like “Bitter Sweet,” “Our Movie,” and “Nothing Sacred” share these melodic-punk qualities; if Gaz wants to get the energy going, he clearly has no issues making it happen!

Our Canadian followers will also recognize a few more familiar sounds from bands in our 90’s catalog. The pop/rock infusion in the music in combination with the sweet vocal delivery from Patterson can ring your memory to recall bands like The Killjoys and The Doughboys. Those comparisons come most notably towards the end of the album, as Gaz finishes the album through some of the strongest tunes on Dodging Bullets leaning heavily on beautiful pop melodies and fantastic guitars. “Too Far From The Truth,” is certainly to be mentioned; Patterson hits this absolutely freakin fantastic guitar part just pre-chorus…it’s a real moment in time as far as a song goes.

For what I’m personally looking for in my power-pop; this album has it all. It rounds out the energy well through contrast with tracks like “Hold On” and “Barely Believe.” “Hold On” is an inventive and fun cut & inspiring through the lyrics, it’s also a good change up to the crunchy guitars of the opening tracks as he makes an acoustic switch here. “Barely Believe” is a hauntingly isolated track…Patterson really takes the album into a new atmosphere here through this acoustic and synth-string pairing. At the halfway-mark in the album, it’s another great switch in the energy and allows Patterson to catch a breath before ripping into “Nothing Sacred” and “Our Movie.”

In an extremely strong album ending, the final three tracks fit perfectly as the climax to this musical adventure. “Too Far From The Truth,” features Sam Gibson, who we had previously reviewed just earlier this month; he lends some fantastic backup vocals to this song as the album starts towards the end. “Promises Into Yesterday” is a smartly written pop-rock tune with anthem-style guitars and excellent drums that take this track as far as it needs to go. Gibson returns in “We Are We Are,” the final cut on the album, along with yet another guest we’ve had on our pages from the UK – Shagpile!

It’s a fitting ending for our introduction and insight into the UK scene right now. Not only are there tremendous sounds coming from all three of those artists, but now we also have the good fortune to know that it’s a true community – these people both know & support each other and they clearly get along very, very well. “We Are We Are” is a celebration of a last song – a true, cut-loose and dance-whatever-weird-way-ya-dance kind of tune.

Celebratory indeed – shouldn’t it be? In talking briefly with Gaz…I can tell you firsthand just how excited he is about the release of Dodging Bullets. He’s as energetic to talk to as his music is and he’s focused and ready to seize this moment. And he MADE this album! ONE guy! If that doesn’t call for inviting a few true friends out for a great time of celebration & beautiful music on a last-track of a sweet album, well…I just don’t know what would.

Looking forward to hearing more from Gaz Patterson. After getting to know him through correspondence and through his music – I completely get the sense that this guy has enough energy in him to power the planet twice over. His enthusiasm, commitment and energy will pay off well in releasing this new album, Dodging Bullets – it’s bound to be well-received by all.

NOT that I’m ALWAYS looking at people’s pages or anything…but I happen to know that Gaz is currently looking for the right musicians to take this album and many more of his tunes to the live stage as a full band. If you’ve got the true musical spirit needed to keep up to this guy – get in touch with Gaz – that’s a tremendous opportunity for someone out there to work with a great songwriter. Find him at Facebook: https://www.facebook.com/GazPattersonMusic