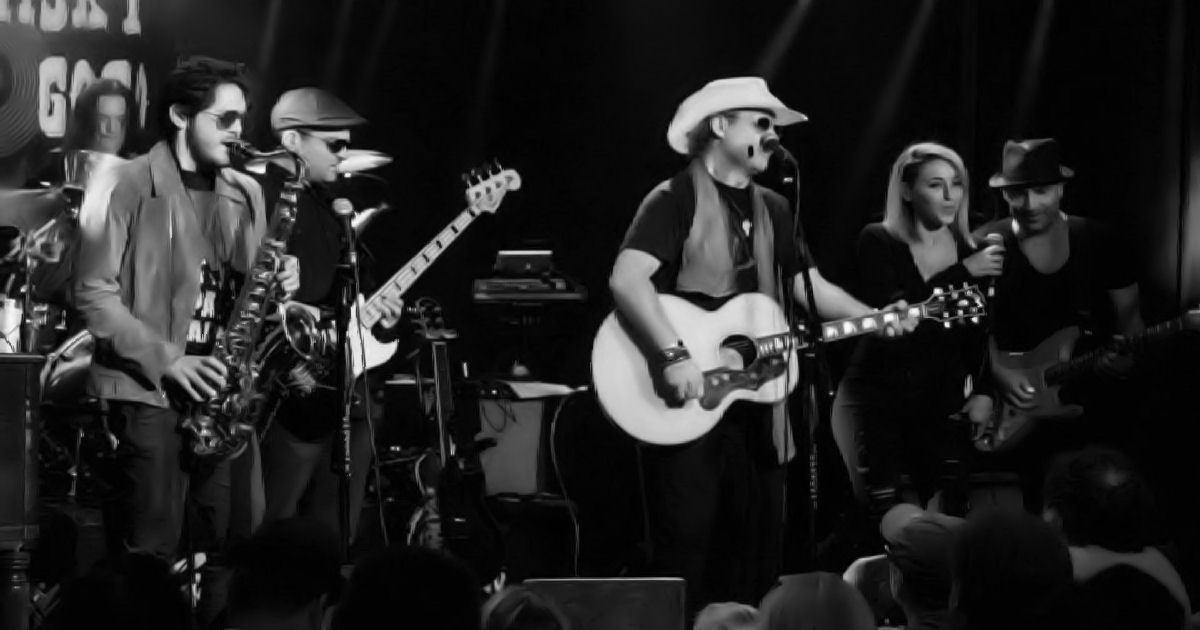 I couldn’t help but feel like there are likely quite a few people out there that would appreciate a song like “River Road” by the Gary Douglas Band.  If I’m being truthful, they ain’t millennials.  If I’m being even more truthful, so what?  It’s not a knock against millennials, it’s not a knock against the band or the song, it’s an observation that is simply trying to speculate on the fact that there are millions of people above that generational-cap that would be potentially suited to rock a song like this on their playlists.  People that appreciate their Springsteen’s and their Meat Loaf’s…people that remember what it’s like to be out there on the dance-floor while a LIVE band plays…people that love that classically-crafted brand of Rock that seems to celebrate the actual genre itself as it pumps from the speakers or amplifiers, inviting everyone into atmosphere for a great time…these are the people that the Gary Douglas Band is going to connect with.  Heck – I bet many in that proposed crowd would tell you that this is what great Rock’n’Roll is all about.  I wouldn’t dispute that…I think there’s something truly timeless about the Gary Douglas Band’s sound on “River Road” that has the comforting familiarity of the strengths that defined the genre for many throughout the years, working to their advantage right in the here & now.

There are several noteworthy elements you’ll certainly hear throughout this new single from this band of seven, from their upcoming album Deep In The Water coming out later on this year.  I think right from the get-go, the great mix of rasp & melody in Gary’s vocals sounds brilliantly confident and controlled; he could likely sing a few spots with a bit less of a gravelly approach, but in my opinion, “River Road” wouldn’t be half as cool if he did.  It’s a stylistic choice that adds an extra layer of wisdom to the sound, which in turn, also seems to add credence to the lyricism and storyline running through the words.  On a lyrical-level, I’m somewhat split – I liked some lines a lot and I appreciated how the sentiment is threaded through the verse & chorus…and there’s a few lines that, within Rock’n’Roll’s massive history, you’ll feel like you’ve heard before in some way.  Even Bruce and Meat are guilty of that…no big deal.  What makes any line of “River Road” more than acceptable to our ears, is certainly the way that Gary sings them – that’s what makes these words come to life.  Performances like this count for so much – the character and charisma in his vocals completely draws you in to listen and the structure of the entire song definitely highlights just how well-crafted the writing is and dialed-in they are to the band’s sound.

Pretty undeniable at the end of listening to this track, you can hear the Gary Douglas Band is full of ace musicians.  The keys are audibly essential to this track, adding in vibrant doses of melody within the impressive mix of instruments combined – they’re always noticeable, present and driving a lot of the heart of this song’s sound.  Could I have used more time with the saxophone?  Surely!  But show me a person that wouldn’t feel that way!  I could listen to a full album of this guy just playing the sax solo – he sounds fantastic.  And for what it’s worth, they’ve placed him right into the perfect parts of “River Road” to stand out…the part is solid, I’m just saying, it makes you crave a whole lot MORE of it.  The rhythm section is right in-sync with each other, reliably moving this song forward throughout the background as the unsung heroes of this tune through their flawless performances.  The guitars also have zero issues providing the entertainment…I very much liked how they were an important element of the song overall, but not necessarily always what we hear along the way…it’s a very well mixed & produced track that really allows each of these players to have their own clear moments in the spotlight.  Whichever fine guitar player got the solo around the two-minute mark, might just take the hardware home for the finest tones in the entire song from any instrument.  Pure perfection, punctuated with the saxophone notes as “River Road” heads into a subtle keyboard-based breakdown before the bring-back & run through the hooks to finish this tune off strong and memorably.

So there you have it…solid Rock’n’Roll tune that works a great vibe of rhythmic Americana into the sound, all played extremely well, all players focused and clearly committed.  No complaints from me, hit the lights, we can all go home now…

…NOT SO FAST!  If you think we’re getting out of this review without a comment on how the backing vocals contribute to this song, you’re straight off your rocker.  What an excellent complement to Gary’s vocals – got’em right in the mix at many points throughout the song, but man does she deliver!  She’s spot-on in tone and harmonizes perfectly – and when it comes to the way the song is structured, they save much of Jessica’s finest moments for the finale.  Even in the swirl of uplifting sound, she still manages to stand-out strongly…definitely a noticeable asset in the Gary Douglas Band and another pillar of strength in a band that clearly has them in abundance.  Really well done – the execution and performances on “River Road” are top notch all-around & you can hear the remarkable commitment from every member of the band.

Find out more about the Gary Douglas Band at the official website:  http://www.garydouglasband.com/