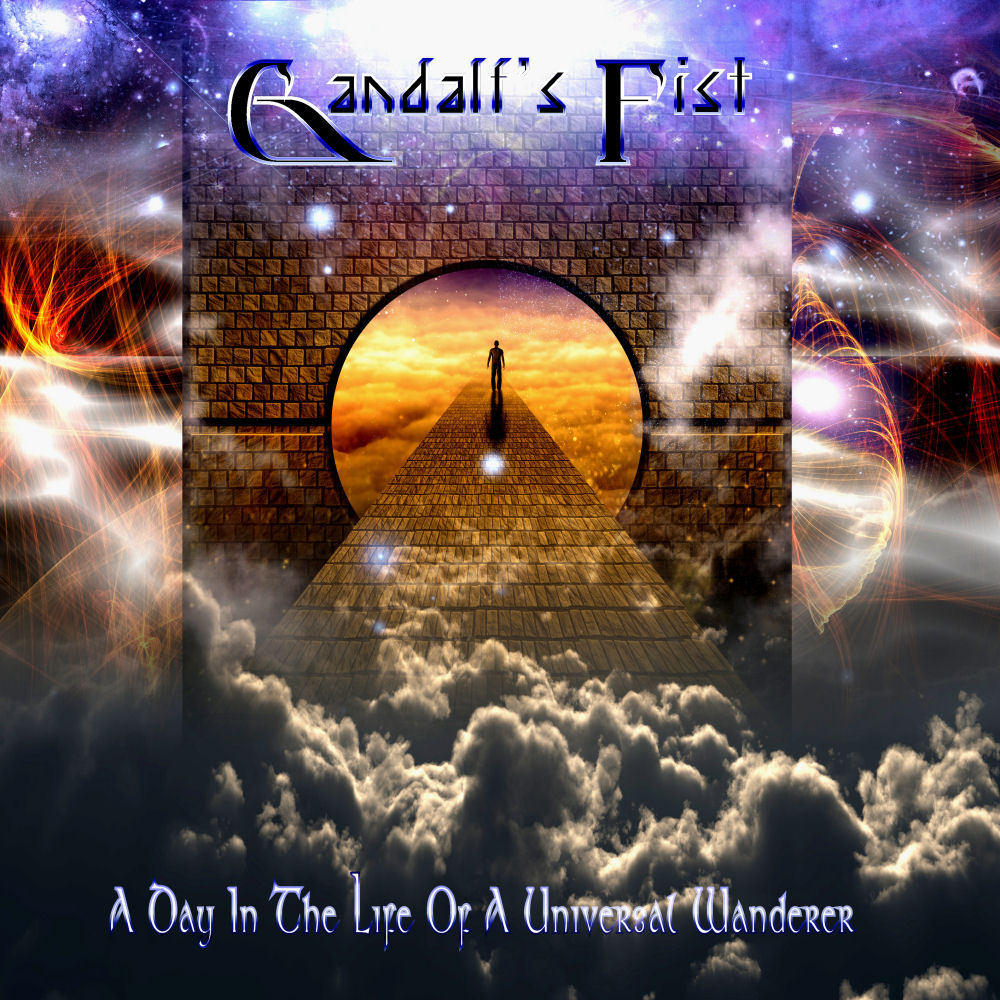 I had mentioned to this band straight away that I love the name of the band, and I do, for several reasons. Obviously when I think about “Gandalf” the only one I can immediately think of or draw to is the legendary wizard from The Lord Of The Rings trilogy – and that’s cool with me, I dig that. The other thing it makes me think about, is that I can’t immediately pin-point what I’m about to listen to from name alone. My best guess would be that I’d be listening to prog-rock, or maybe electro… what have I signed up for this morning?

These are just the first thoughts that go through my head during my favorite moment of the day. Thought I’d share them with you all, but I can’t wait any longer….it’s time to push play on this new album A Day In The Life Of A Universal Wanderer by Gandalf’s Fist!

Alright – so I have to confess…I’ve pushed play more than once already… I know, I know – it seems like literally NO time has passed since I pushed it to begin with. Here’s the thing though…I’m a firm believer that bands spend HOURS and DAYS and give up VACATIONS with their loved ones just to hammer out the final order of how the tracks flow on an album. I know this doesn’t always happen, but it IS what I want to believe; they’ve been some of my favorite conversations and also led to some of my finer mix-tapes back in the day! But the fact here is, I had my player set to randomize whatever came on and I have jumped ALL OVER this album. Now I’ve got it in order and I’m easily able to hear the planning and care put into this album…it’s very well thought out.

That narration is extremely important however, and it sets the thematic premise that runs deep within the album and work of Gandalf’s Fist. At this point I’ve cheated and peered into their Facebook profile deeply…it is most certainly prog-rock coming our way this morning. Every bit true to genre-form, this band has delivered an album that is incredibly cohesive and truly takes you on a journey into their world. The narration goes on to explain the importance of belief and hope – two of my favorite themes in music…I continue to expect big things…

“The Nine Billion Names Of God” shows through song what the narration had just pointed out to you. Weighing in with eight minutes of incredibly unique sounds, textures, tones and style – I can’t help but become attached to this immediately. The drums have incredible flavor, the vocals are delivered in good contrast to each other and overall the sounds are incredibly well-produced and clear. At just past the two-minute mark you get you first sampling of the instrumentation and skill of this band as they launch into guitar solos before breaking down into a saxophone and changing up the song yet again. If this is what the first “official” song is like on the album – you can consider my thinking much like our narrator who opened the album; it is my BELIEF that the following songs are going to be of equal caliber, and I HOPE that I’m right!

The ability to change and the mastery of space runs deep throughout this album. I looked these guys up and they’re from Cumbria, Northwest England, in the UK. That’s known as one of the places there with the lowest percentage of people versus available space. I read a statistic like that and it makes me instantly understand making music in a place like that. For you garage-bands out there – imagine that the garage next to you is another street away from you instead of three meters of grass that separate you from your neighbors currently. It would be amazing – at least that’s the way I’m picturing it. I imagine you could be free to make ANY sound of your choosing, one after the other and completely different from the one before, and never hear a complaint from the neighbors – ever.

I’m going to have to talk to Gandalf’s Fist more – but this strikes me as the case for them. Listen to “Somewhere Beyond The Stars” – this incredible, stand-out departure from the rest of the album shows the depth of their music as they surrender the microphone to a female guest-star who shines brightly against this change-up in the music. This leads into “Orphans Of The Sky” – another stand-out track from the album that shows the range and depth of the creativity in Gandalf’s Fist’s music. There are incredible synth and effect lines that rule in this track along with mystic guitars that all explode into a powerful chorus.

The lyrics come out clear without it sounding like they decided in the control room that the vocals had to be in front of the rest of the band; they sit right where they should in each track – there’s a great mix on this album.

Your humble narrator comes back to us again throughout the album in other tracks as well, providing that thematic tie-in and creating a unique cohesion in the album that doesn’t spoil the music. The best way I can put it, is that I’m a singer myself but I don’t always need “singing” to be the vocals on the track. I like effects, I like narration – I LIKE using the voice as an INSTRUMENT. Through all of these examples – this album A Day In The Life Of A Universal Wanderer executes in creative spades.

You can hear another perfect example of this in the incredible track “Nexus” which blends a Led Zeppelin/Pink Floyd style track (As in YES PLEASE, MORE OF THAT!) against contrasting male and female vocals that just work incredibly together. This track has the whole package and certainly hasn’t forgotten how incredibly talented the band is; you’re treated to saxophone, keyboard and guitar solos that are full of the purest of AWESOMES.

I can tell you this; the album and music from Gandalf’s Fist held my interest for the entire duration. Did they stumble at all? Not so much. If anything I thought the track “A Universal Wanderer” attempted to go for that “anthem” feel with a little too much attack; it stood out to me a little as a departure of from what sounded so compellingly natural in the music of Gandalf’s Fist. As much as I like the vocals of “The Battle For Tannhauser Gate” – this track borderlines on that same element…that fine line of what is “written for the moment” versus what is “created in the moment.”

How about this – I’ll explain it this way instead… There’s Gandalf’s Fist INSIDE the lines, and there’s a Gandalf’s Fist OUTSIDE of the lines. Inside we have one that draws on musical influences and can write really amazing songs that people will love. Outside we have a band that does their OWN thing so incredibly naturally and well that ANY new sound or direction they create or come up with is something you will want to hear again immediately and listen to with your full attention.

The closing track, “The Wanderer Goes South” is a return to the outside from where it began…where the majority of this album LIVES. I extremely enjoyed listening to this last track breakdown and build-up; more great vocal ideas and the harmonies between the vocalists are just flawless. Though Gandalf’s Fist’s official line-up is of only two men – Luke Severn and Dean Marsh – the addition of back-up singers of all kinds and other instruments like flute, drums and saxophone from guest stars has done an incredible job in strengthening, supporting and filling out the music throughout the album.

I think that Gandalf’s Fist has really challenged their creativity and dug deep to write this album A Day In The Life Of A Universal Wanderer. I think the work was more than put into making it and you can hear it – they have certainly made an album that will pull people in to listen. There are just too many unique elements at work to ignore it and a dozen ways that it weaves and ties itself together to sound like an entire album. Very solid stuff.