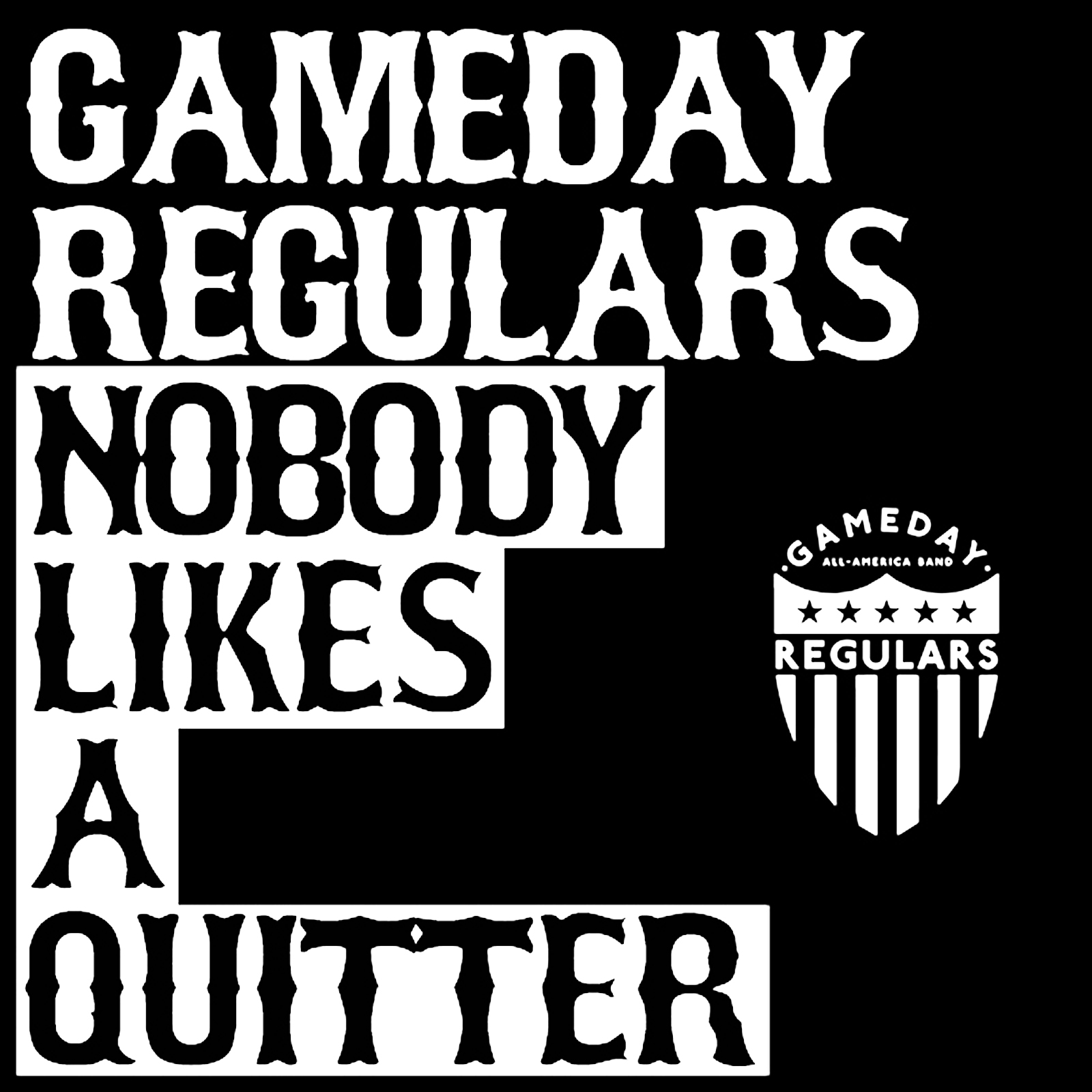 It’s always interesting – no matter what I send out into the void during these interview arrangements on internet articles, it still always surprises me to see what comes back. Some artists have a TON to say – and some artists don’t so much – but they still have that want and need to connect to their fans – just like Will Romeo does in this interview with him representing his band – Gameday Regulars.

Armed with a good sense of humor and a positive attitude projected both through his life AND music – Will, along with his brother Gino and bassist John Ryan have continued to stay the course as a band through some immense adversity. There have been a great many bands that would not be able to continue on after being placed in some of the scenarios the Gameday Regulars have found themselves in – a true testament to the band’s unity and positive vibe they represent in their music.

We were happy to have been contacted by these guys and show them to you here. Make sure to follow the links in the article for more wicked Gameday Regulars info, to support them, – and view the random stuff they post up! Enjoy!

SBS – Immediately when I heard your music I instantly thought of two bands. I started at the beginning of the EP – with “Kids Of The Cove.” I thought of The Mighty Mighty Bosstones and of an obscure band called Cold Water Flat. Tell our readers where you draw your musical influences from…..

Will Romeo – Our biggest influences would have to be: Jawbreaker, Descendents, HWM, Samiam, Leatherface, Lucero, and The Replacements.

SBS – With an extremely aggressive vocal style, do you feel like there’s a battle there slightly – maybe even more than slightly – to win over an average listener?

Will Romeo – Not really – you either love the cookie monster vocals or you don’t, haha.

SBS – One of the things I actually appreciate a lot listening to music in your style is the separation of instruments and vocals in the mix – I think that’s there in your music. Who did the mixing of this EP of yours – songs from the upcoming album Nobody Likes A Quitter?

Will Romeo – Thanks – Greg Dunn of Moving Mountains.

SBS – And as far as something like the background vocals go – I think it’s awesome that you included a fairly clean vocal track in your songs behind that growly aggression up front. How do you feel like that element adds to a Gameday Regulars track – it seems like singer Will Romeo is here to rough it up and get the party going – but going back to the second question – this almost brings the songs to a more accessible level for people doesn’t it?

Will Romeo – Yea totally real – adds another dynamic to the sound.

SBS – With that kind of cleaner voice in the background as well – do you have any plans to feature that sound in the front – or is the grrrrrrrrrowl of the band just where you’re at?

Will Romeo – We’re currently writing, see what happens with the new batch of songs were working on.

SBS – And how about the EP in general, which was released on Jan. 8th – tell us how that’s being received out there by your fans right now and have there been any new developments that have spawned from putting that out there?

Will Romeo – We have had nothing but positive reviews and were just awaiting the release of the vinyl on Veggie Co. Records in the upcoming months.

SBS – Will in the bio for Gameday Regulars is described as having a “balls to the wall” and “never give up” personality. With an EP out and an album called “Nobody Likes A Quitter” coming up – I’m sensing that you’re trying to communicate an overall message to us all. Will – what do the Gameday Regulars have to say through your voice and lyrics – what message are you putting out there?

Will Romeo – Basically last year wasn’t a great year in the Gameday family, but we’re still out there playing and putting out records despite all the obstacles. The record deals with the end of the something and start of a new beginning.

SBS – Be honest – what’s it like to get up there on stage on a day where you’re sick and too tired to play? What can you do to overcome those scenarios and really still give your fans a great show?

Will Romeo – Just go out there and give it your all, also whiskey helps! Haha!

SBS – On the show front – what have we got on the horizon for the short term guys? Shows coming up? Working on that album or next EP? What’s happening?

Will Romeo – We’re currently writing songs for a full length and tour as much as possible this year.

SBS – Now…..Will and Gino – you’re brothers and band-mates. Not too many of those but certainly a recent example are the brothers in Oasis, infamous for NOT being able to handle that scenario – has this ever been a complication for you guys? How does it function well without breaking down?

Will Romeo – We have been in bands together for close to a decade we kinda know at this point how to handle each other, haha.

SBS – And how about that bassist John Ryan? How did he end up cracking through a brotherhood to join in this band and how long did it take for it to feel like the Gameday Regulars were the cohesive unit they are now?

Will Romeo – John originally was gonna jump on board last year and our old bass player Kenny was gonna move to guitar.. Kenny left the band and John jumped right in, we just picked up were we left off.

SBS – You can hear by the end of the EP that you’ve sent me – that you all like to write BIG anthem style songs – where does that come from? As an EP – the 4 songs don’t really let up at all in their energy – so…..is there a soft sensitive side you guys are hiding? You can tell us now or just let TMZ show their footage when you’re famous. I say control the scenario. Spill.

Will Romeo – We like sing-alongs, and that’s generally how this band has come across. There is a softer side that we haven’t explored yet, hopefully in the next release.

SBS – What can a new person who has never seen or heard you before expect from the Gameday Regulars in a live performance?

Will Romeo – What you hear on the record is what you get live, just with a lot of Bushmills !

SBS – What would you say is the biggest goal that you share between you solidly as a band?

Will Romeo – We all really want to be able to just put out records and be able to make this our living.

SBS – Now, because your scene and style is unique – who else could you point out, what bands are out there making music like you now that deserve some props for contributing some kick ass music to this genre?

Will Romeo – The Stereo State, The Tired And True, Gunners Daughter, Nightmares For A Week, All Eyes West, And Broadcaster

SBS – We’ve spent some time with a lot of drummers and bassists in this last little while – I’m feeling like digging into the guitars in this band a bit more today…..what kind of equipment are you using to get your sound? What’s the go-to guitar for a Gameday Regulars recording session?

Will Romeo – SG classic with p90 pick ups, and American Standard telecaster thru vox ac 30 and I love to use an orange rockerverb100 thru orange 4 by 12…

SBS – Where do you all currently practice your material and how do you know a song of yours is “ready” to go in to a studio with to record?

Will Romeo – We basically have the songs done and whatever happens in the studio we let happen. We practice in my parents basement.

SBS – And how about in assembling this new upcoming album from you – what kinds of things are you considering when organizing the tracks to be put on the album? What kind of order do the songs you write fall in and who decides that?

Will Romeo – Everything in this album happened organically, both sides had two songs which complimented each other.

SBS – What would you say the biggest challenge you’ve faced as a band so far would be, and how did you overcome it? With the positive attitude in this band and the music – I’d have to assume that you DID overcome whatever this hurdle was – right?

Will Romeo – Basically our label Mightier Than Sword folded, leaving us with no stock – so no record to sell at our shows. All our booking agents except in Canada dropped us – and money has always been an issue. Being DIY means were cutting the checks to make stuff happen. We’re very fortunate enough to have managed to have kept it together and our new home, Veggie Co. Records have helped us get this record out.

SBS – Tell me about where you’re at geographically – cause I’ve never been to the Bronx. You all there likely to accept a bearded Canadian freak like me there? Through movies, I gotta say…the Bronx looks TOUGH guys, and I’m a musician not a boxer you know? Tell us about the real Bronx you know about so that we can adjust our perception.

Will Romeo – We love Canadians, and our stoked to go there this spring for Pouzza Fest. The Bronx is not as bad as it has been portrayed in the media, and believe it or not there is a small music scene here. We have the Yankees and really good pizza!

SBS – Open floor for the Gameday Regulars parting thoughts – is there anything else you wanna tell us? I know you include all the good places that fans and new fans can find you stuff….but what else do you wanna leave them with?