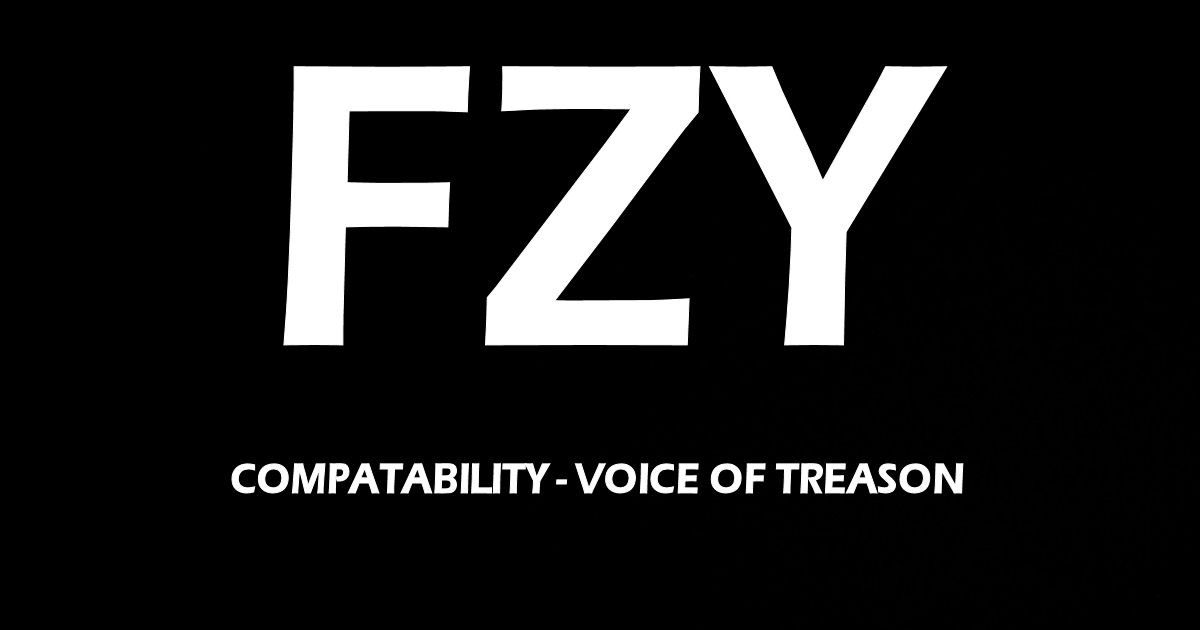 Way back when I started things up here at SBS, I had the honest intentions of being able to remember each and every artist/band I’ve ever worked with.  Keep in mind, even attempting to do something like that over the years to follow is going against the vastly expressed sentiment of every teacher I ever had who would tell me I lacked retention & comprehension in just about everything I ever did.  The exception has and always will be music…that’s where my memory comes in handy and actually stores & retains the information I actually value – not the value of pi, how to solve for X, or multiply fractions.  I’ve written well over 1800 reviews for this one site alone, not even counting my previous experience long before here…and while the growing number can make it hazier trying to recall everyone – I’ve still got a fairly decent batting average when it comes to recognizing a name, style, or sound for the second time.  If I’m being honest…it’d probably shock most people how many bands, songs, records, and artists roam around the upstairs of my thoughts daily…for some out there it’s useless info – for me, it’s gold.

I’d also be willing to bet there is probably a ton of artists/bands out there that likely think what they’ve made is forgettable – or as many of you have felt throughout the years, that no one is even listening.  Maybe that’s why I give a shit…maybe that’s why I try harder to remember this ONE thing in my life and not let the goldfish swimming around the memory bowl of my mind dictate or forget the entire mission.  I’ve often wondered what an artist like FZY thought of the track I reviewed in 2016 called “Whatever Waits Above” and if the dude felt even halfway as strongly about it as I did.  Little to next to nothing at all is really known at FZY…wasn’t like I could just reach out and call the dude up, you know?  I had a single pop into my inbox one day, I reviewed it, and for many, that’s where things end as we all move on to the next whatever it is that we’re doing.  Sometimes though…sometimes art speaks beyond that first impression and continues to make an impact years & years later…and I never forgot FZY or that one single I reviewed, way back when in 2016.  In fact I played “Whatever Waits Above” twice on the SBS Podcast over the year-or-so to follow, once on an episode because I straight-up felt like playin’ it cause I know it’s a track that most wouldn’t dare to – and the other ended up on a year-end list of my favorite tunes that we put out in the New Year of 2017.  So believe me when I say, I’ve never forgotten this artist – that much is proved by the documented proof that I’ve continued to shout this dude out & listen to that track ever since I first heard FZY for the first time and long afterwards right up to & including NOW.  That’s what I’m saying here people…when you do something different, you stand out for all the right reasons…I ain’t gonna say “Whatever Waits Above” would have been everyone’s jam but it certainly was mine.  Innovative, creative, hell – bizarre for sure at times even…but something seriously unique was being unearthed in that song…and it’s always been my hope that FZY would continue on to make more music of some kind – ANY kind…there was more than enough in that one track to have me hooked.

But you never really know where an artist is at or where they’ll go, where life will take them, when the music will flow & when it won’t.  Like I said, it’s not like FZY and I are sending Christmas cards back & forth to each other – in the artist/reviewer relationship, it’s hear a song/album, make those comments, and move on to the next – usually at a pretty damn good clip too.  So when you don’t hear from one for a while, you wonder about what might be goin’ on or if they’ll ever come back…and then of course with the more time that passes, the more that wonder turns to doubt…maybe the music we got was all we’ll ever get – you never really know.  We’ve got no right to demand fuck all from any artist – we can only hope we’ll get more of something we love in an all-new light if they end up returning to share more with us…and so we wait – but we never forget.  Or at least I don’t when it comes to incredible music.

I suppose the ultimate point I’m making, however longwinded, is that I hear ya brother.

“Compatability – Voice Of Treason” is the first new cut I’ve got to hear from FZY in more than two years.  As sad as I am to admit this or as painful as it may be to put it in print – if this is the stunning quality and adventurous ideas & sounds he’s gonna take so much time to create then…dammit…sigh…I’ll fuckin’ keep waiting if I gotta.  Whatever makes it come out like THIS NEW SINGLE DOES, I’ll wait that long.

Dude raps like a champion, straight-up…so there’s that.  The bulk of the first half of “Compatability – Voice Of Treason” is loaded with bars that get all kinds of serious with its upcoming examination of emotions, thoughts, and feelings…all based in what sounds like pretty savage heartbreak.  FZY not only raps with ridiculous precision and on-point pivots as he transitions from bar to bar, but he makes an effort to really match his intensity with the intention & design of the words.  He’s also got like…I dunno even what you’d call it…like the helium-based ghost of not-dead-yet Elton John floating around in the atmosphere, buzzing a bizarre but oddly comforting melody into the beginning of this song.  I should mention that upfront I suppose…there are definitely two distinct halves of this song; if you didn’t find that already implied by the title, you’ll hear it where they connect & drift together as the ideas merge.  The front half of this cut is LOADED with expression and art through the vocals, the latter half will go on to do the same, but largely through the music alone in the massive shift in style this single will make just past the three-minute mark.  The piano-based melody and absolutely KILLER drums he’s got goin’ on in the beginning stages of “Compatability – Voice Of Treason” are stocked full of inviting, warm, and friendly vibes – and it’s all happening while FZY is essentially losing his damn mind on the mic overtop.  A testament to the man’s focus on & commitment to performance – these words are spit with the genuine energy & spirit required to make these emotions & thoughts believable…and the experience a real one.  Character, personality, charisma, expression – you name it, FZY works that magic & more on the mic.  Ain’t no doubt that it sounds like the man could use a hug though, just sayin.’

Because I know next to actual nothing about FZY beyond the music I’ve made – I couldn’t tell ya one way or the other definitively whether or not he’s responsible for playing or sampling or assembling all of what we hear – but the end result is the same, this guy doesn’t just make music, he makes fucking ART.  As insane & as crazy as it might get at times, you literally cannot describe this guy’s music any other way.  The seamless transition into Post-Rock as “Compatability – Voice Of Treason” shifts gears entirely, is not just great – it’s damn near fully breathtaking and a spectacle of its own design to behold.  Wickedly organic, you start hearing the move into guitars & drums leading the way as the low-end & atmospheric elements continue to gurgle & bubble underneath the shimmering surface.  Towards the sixth minute, FZY comes back to the mic, inspired AF like a breath of fresh air with the uplifting tones of the guitar soaring into the mix and echoing in behind him.  But you get to the heart of the matter on this final verse…the truth of it all, if you will – this is the man saying what he really wants to say, plain & direct as he’s capable of saying it.  It ain’t always pretty – and sometimes that imagery is gritty as he details the thoughts & emotions he’s going through as best he can explain them.  LISTEN to his tone of voice…LISTEN to the fragility, tension, and frantic intensity you can hear coursing through his veins – it’s like he’s barely holding it together.  A memorable highlight & a powerful set of bars that is bursting right at the seams, it’s perfectly punctuated by the explosion back into the music and guitar solo as FZY drops the mic for the final time & lets the music carry us on out.  No average solo we’re talking about too – and that’s what I’m saying here…there’s SO MUCH going on…that in theory, as one dude, it might just take two some-odd years to complete something as ambitious, innovative, and adventurous as this song seriously IS.  Like as in, if that’s the same dude shredding the guitar, rippin’ it up from the drum throne, AND delivering piping hot bars that’ll scorch the hairs right off yo momma – I mean…you get where I’m going with all this.  The level of talent & skill, foresight & commitment to carry ideas like this through is seriously exceptional stuff – and it’s a total combination of music & art that completely deserves to be recognized for the amount of time & effort it would take for sure, but also for the fact that tracks like “Compatability – Voice Of Treason” just don’t come along every day, as much as we might hope they will.  True art takes time…FZY has proven that here once again with this brand-new single.

Like I was saying…I’m a greedy fuck when it comes to music…I want more of it all day long and it’s always the reason I get out of bed every morning…in hopes to find something truly unique, like what FZY is capable of.  So ignore my impatience homies…if it takes another two-plus years until the next cut, I’ll be right here waiting, now turning up TWO tracks by FZY loud’n’fuckin’proud because this dude is crushin’ it when he pushes record – and he makes music an experience that’s truly worth waiting for.