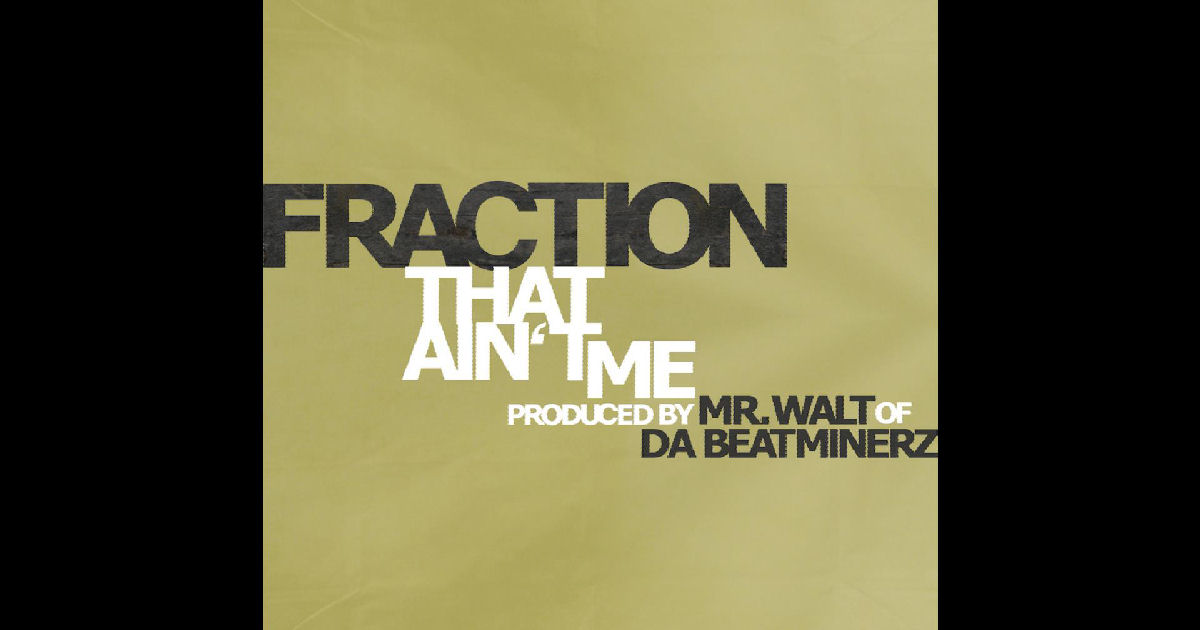 I got time for this ALL DAMN DAY.  This new cut from Fraction & Finsta from their record Thoughtwork, a single-worthy rhyme known as “That Ain’t Me” hits the mark on all fronts…these two wordsmiths keep the beat smooth and the rap complex & thought-provoking, allowing your mind to drift right into the music as the lyrics penetrate your dome.

If you’re anything like me, you’ll recognize that the music is magnificently looped and full of texture & character that really delivers – hence even though it moves in a hypnotic & repetitive way, you still WANT to hear the music on “That Ain’t Me” at all times.  WANT is almost putting it mildly…I mean, they’ve seriously found a killer sample here in the music produced by Mr. Walt of Da BeatMinerz – I must have had this cut on repeat at least a hundred times in a row and never once felt the need to change it up – not even remotely kidding or exaggerating in the slightest, that’s the real.  Doesn’t take much to read between the lines of what I’m saying there – this is a seriously rad track that has found its own defined sound that keeps it unique from what’s already happening out there today while still being enticing to listen to & audibly paying respect to what makes real hip-hop great.

For REAL – these homies are SHARP when it comes to the pen & paper and they’re just as strong on the mic & in their flow on “That Ain’t Me.”  This track connects – and there are several reasons as to why what Fraction & Finsta bring to the rap game truly works.  You can certainly hear the complexity of the words they choose to use throughout the bars of “That Ain’t Me,” whether it’s the straight-up word-use or the meanings behind them – they give you a ton to chew on & think about as they roll through the lyrics on this cut.  People out there tend to confuse what a ‘wordsmith’ really IS when it comes to rap/hip-hop music…it’s all too easy to assume that it simply refers to an emcee that can string a really clever sentence together.  Now…while that might not be entirely untrue as a definition – there is more to the ART of being a wordsmith than just that one aspect – and that’s where the rhymes of a crew like Fraction & Finsta start to set themselves apart from the rest out there.  Being a wordsmith when it comes to rappin’ – means that you understand those words you’re spittin’ and that you’ve made that connection to the demands of the rhythm, cadence, character & flow of the lyrics and add the right energy, emphasis & punch into all the syllables & words that require it.  You can absolutely hear just how well Fraction & Finsta know this material like they live & breathe it daily – “That Ain’t Me” is the kind of cut so strong that you instantly know they’ve put the effort into every moment to make it perfect.  It’s because of the natural talent they have, that none of what you hear feels forced and comes out smoother than smooth – the work has certainly been put in to make it that way and they’ve no doubt practiced their parts & refined them to the flawless flows we hear on “That Ain’t Me” today – but when it came time to record, they kept that vibe seriously loose and organic…and in a sense, you’d never know just how much effort has likely been made to get this cut to come out this RIGHT.  And don’t get me wrong – as listeners, that’s exactly what we’re looking for in the music, bands & artists we give time to – these two emcees are on the all-pro all-star team when it comes to the strength of their grip on the mic and what makes words really stand out with bold rhythm and even bolder character in tone.

The bars are HOT the hooks are stronger than steel – personally I fail to hear what else you could want from these two on “That Ain’t Me” – this is a brilliant cut all-around and a massively exceptional first impression of Fraction & Finsta’s enigmatic style if you’re checking it out for the very first time.  That being said – if you’re an existing fan of this dynamic duo, it’s cause you already know about all the good things I’ve had to say here today…and clearly you’ve got great taste in what’s good when it comes to hip-hop.  Fraction & Finsta make a serious impact with “That Ain’t Me” – I think it’s an incredibly strong representation of their style & sound and certainly shows that these two emcees are one notable force to be reckoned with.

Find out more about Fraction & Finsta from the official Facebook page at:  https://www.facebook.com/bigfracmusic