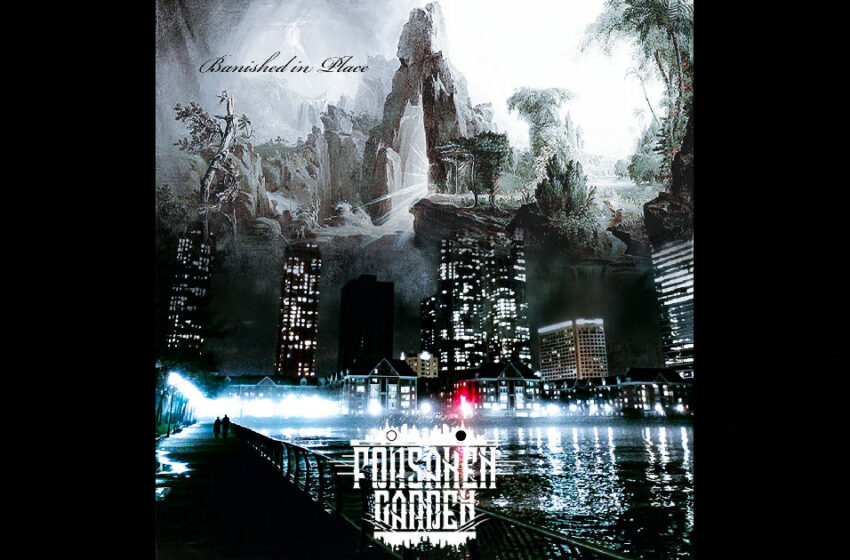 OKAY.  Let’s get one thing mighty clear here…just because I type these word-things out all day long does NOT mean I have any clue as to how it all actually happens.  As in, “I’m not a smart man, Jenny” – I’m pretty much Forrest Gump, minus all the incredible life achievements and such.  How am I supposed to keep up with a song like “Space In You” that comes with a description like this:  “This song is essentially about the nature of Samsara in the form of a train station no one ever leaves.  The feeling between the liminal space between where you are and where you’re going, and how that’s really that is where we mostly exist.  In liminal space in one way or another.  Also refers to the Lovecraftian source of all things, Azathoth, as dreamer/ creator of all we experience on this plane.  A commentary on how separation is illusory and we are all the same being, in different costumes.”  I know…some of these words…others I practically recognize as mere shapes.  Forsaken Garden definitely thinks about the material being made to the nth degree…whether I’d ever understand it all or not aside, I definitely appreciate the extra effort.

Alright…perhaps I connect to what Forsaken Garden is saying more than I’m letting on – the point is, this is a smart dude driving the high-art vibes carefully woven into the fabric of this Alt/Goth sound being created.  When it comes to the concept of “Space In You” – I’m loving it – this whole idea of the liminal space being where we actually exist all the time was extremely interesting to me, and certainly one I felt like I could connect to.  I mean…recognize we’re being wordy here because we’ve got a capable mind that knows how to wield words like a written sword – but ultimately what’s being expressed is a core sentiment so many of us can connect with – Be. Here. Now.  The moment is all we’ve ever got, and “Space In You” explores that theme in a brilliantly poetic way that captures emotion, beauty, drama, internal thoughts & insightful observations.  You realize that the moment we have, is both everything and nothing at the very same time…just a piece of an endless puzzle we’ll never solve to a picture we’ll never see clearly – we are eternal; and this experience we have, is really only as real as we actually make it.  “Space In You” deals with all kinds of aspects that challenge our existentialism…whether or not we’ve got free will, or whether we’re merely a very small fragment of a much bigger story being told…or at least, these are the theories I’m going with.  I’m way too far gone at this point to make any sense out of life & one step away from believing in simulation theory after watching A Glitch In The Matrix this year, so admittedly, I’m probably the last person anyone should be taking advice from on opinions of how time & space & the human experience actually work.  What I can tell you for sure is this – Forsaken Garden’s got a stellar single-worthy set of vibes to be found on “Space In You” – right after about a twenty-second atmospheric opening, this track bursts right into the thick of a seriously meaty groove and fantastic energy that immediately pulls you right in.  All-in-all, we’d be talking about something that’s probably like a merge between The Editors and Joy Division…energetic like The Editors tend to be, poetic like Joy Division, that added hint of Goth sound that both share through their Post-Punk sounds – it’s a gripping cut when it comes right down to it.  The guitars are freakin’ fantastic & texturally essential, the vocals came out haunting & beautiful at the same time…and the drum beat actually really worked for me in this instance.  Chances are, if there’s going to be any complaint to be made, that’s where it’s gonna come…and to a degree, I’d get it – I do think there could potentially be more variation to the sound of the digital drums that could benefit Forsaken Garden and a track like this overall…BUT…as much as that might be a possibility, I don’t want that to get confused with me complaining now – I’m not.  I gotta say though – my real first impression of listening to “Space In You” pretty much went like this:  “Forsaken Garden, I remember you being solid before – but were you THIS good?”  “Space In You” comes out with massively accessible sound, gripping energy, and heavy weight to its artistic vibes combined expertly into this one experience – that’s never an easy task to begin with, but Forsaken Garden proves it can thrive in that realm with complete confidence.  Strong material, catchy stuff, executed with professional passion – I’m digging it for sure.

I’m probably going to argue that “Space In You” is likely that much more accessible than “Backward March,” despite what is CLEARLY one of the slickest beats/grooves of 2021 you’ll hear threaded into the addictive sound that slides outta your speakers in listening to this second single.  Nothing to do with the songwriting, it’s simply an observation on how the masses out there tend to absorb their music – “Space In You” has that quick & catchy beat that makes it easy to grab our attention, and “Backward March” is a much more stoic ride through big, bold, steady & slower movements…believe me when I tell ya, I’m not some kind of insightful all-knowing oracle here, it’s just how the vast majority of people’s ears work.  Conceptually, I’m probably equally as in love with this second cut as I am with the first, though they’re truly written in two separate gears with separate intentions.  You’ve got “Space In You” taking on more spiritually-based themes at its core, and “Backward March” ends up hitting much closer to a grounded & grim reality we’re growing all-too-familiar with.  The gist is that, “Backward March” ends up musing on the fact that we’re a species that seems way too eager to destroy its own – and I have to admit, I am 100% onboard with that being the truth as far as I’ve experienced it myself.  It’s about greed, motives, the lengths of which we’ll go to in order to be there first, make it bigger, make it better – and the idea that enough is never enough.  When it comes to the aspirations for domination of this planet, they come from every corner of the map & don’t be fooled otherwise…any power in charge would likely abuse the privilege.   Sure they’ll send out a quick tweet of some thoughts & prayers, but we’d still be in-store for “a repeat of last night’s program” all over again the very next day, no matter what happens or who’s really in charge as far as I can tell – we might all start out being good people perhaps, but absolute power corrupts absolutely, exactly as they say.  “Backward March” digs its heels into this through a lethargic-but-observant acceptance that sarcastically points out the many flaws in our foolish thinking and highlights the brutal actions we take towards one another while trying to play the game of Risk with real human lives.  For the most part, I’m onboard with the final results here…I seem to keep on coming out feeling like the vocals needed just a bit more lift in the volume or spark to’em somehow, they get sunk in six-feet deep here at times, and Forsaken Garden puts so much thought into the lyricism of these songs that I just don’t want ya to miss out on it is all.  I’m usually on the opposite side of the fence on that issue though…most times I’m tellin’ folks out there to turn the vocals down to make the music even bigger as a result – and I’ll admit, I do love that about the music on “Backward March” – it’s every bit the BIG & BOLD track as I’ve told ya.  For me, this track reminded me much more of something closer to Prick from the early 90s…which certainly works for me personally – and every time that extra guitar layer came in just prior to the second minute, I couldn’t help but get even more stoked about this cut as it played on with the vibrant sound that added into the mix & energy overall.  Or the chops around the three-minute mark for that matter – same effect there too – the extra personality counts for a TON when we listen in tandem with the steady beat it supplies…finale-wise, the whole last minute of “Backward March” was wildly innovative, ambitiously intense, and delivers the powerful conclusion to this single that it deserved.  Both of these new cuts are solid additions to Forsaken Garden’s catalog and give you two different directions in terms of vibes, themes, concepts, and sounds – but no doubt it also supplies one seriously tight experience in terms of the effort & focus on display in the art of songwriting.

Find out more about Forsaken Garden at the official website:  https://forsakengarden.com