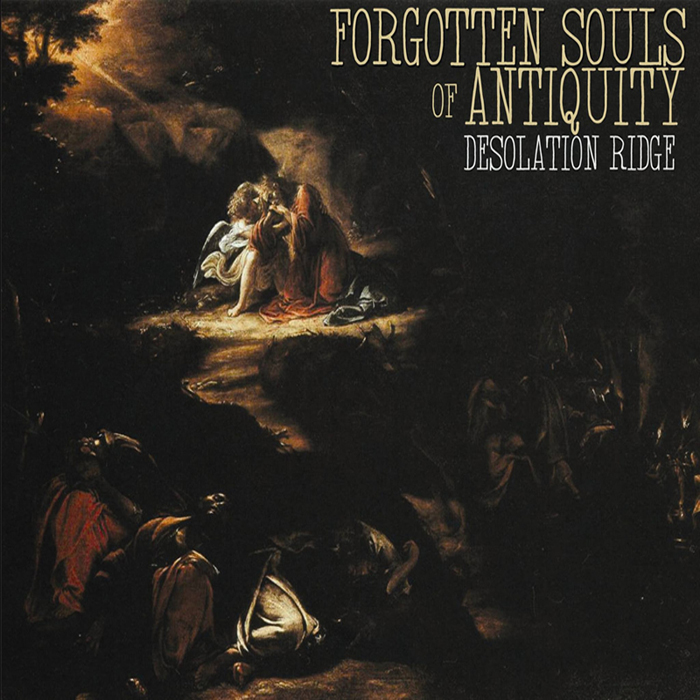 It probably does. What’s more – if you check into the social media and online-pages of the Forgotten Souls Of Antiquity, you’ll see that they come by their theft of rhythms honestly.

From the moment that the first track “Norfolk Line” started out, I instantly felt like I knew the song. I’m beyond choked at myself for not remembering what the track I’m thinking about IS that this reminds me of so, so much – but the end result was that I instantly checked into the online world of Forgotten Souls Of Antiquity to gain some context for this review on their new album Desolation Ridge.

And as it turns out…you’ll read that they’re more than aware they’re packing familiar rhythms – and in perhaps the best list of influences you’ll ever see which includes 33’s, 45’s and 78’s it won’t take much more to convince you that this band has both seen & heard a lot throughout their lifetime; we all like shiny things and gravitate towards similar rhythmic properties. The main difference here is that Forgotten Souls Of Antiquity OWN it rather than be another band hiding behind their influences. They range in styles that resemble some of the greats in rock, punk, Americana, country, jazz, blues….you name it – this is a band that is combining that sum of their influences in ways that make them completely their own.

“Spider’s Requiem” reminds me of Cracker, a band I love…self-professed hicks of Americana. It’s got a lonely-road feeling to this track…like you’re just about to crack into the desert for a long drive in a fast car. It’s played with energy, it’s played with a committed performance; you can hear the confidence in this band growing with each second that ticks by in these opening tracks.

With what is one of the most convincing Tom-Waits-ish sounds I’ve heard since the man himself began to make them, “Let It Go” is an absolute GEM on this album. Dark, gritty, slow and captivating; this song plays along like the plotline of your favourite thriller. It’s performed with sheer style and respect to that sound…it’s performed perfectly; I fuckin’ love this tune.

Now…when it comes to tunes like the opener “Norfolk Line,” or “Jesse James” here…you’re either going to be the type that love that Americana-rock sound. “Jesse James” plays along like a glorified rock-gospel-tune, huge with a chanting-style chorus and complete with an incredible saxophone just KILLIN it in the background. Very much like something you’d hear from Social Distortion…perhaps even Rancid if they had put a slight country-spin on their punked-out tunes. And keep in mind…they’re not hiding their influence of ‘33’s, 45’s and 78’s’ – so when they launch into the “200 Miles To Memphis,” you’ll naturally feel like you’ve warped back in time whilst sitting in your armchair listening. With a “Johnny B. Goode” vibe to the opening, Forgotten Souls Of Antiquity seem hell-bent on ONE mission and ONE mission alone if you were to ask me…

…I mean…did you notice the great time you’re probably having?

This is entertainment and delivered extremely well. From the versatility in the music, you get a good mix of different sounds, some even dramatic and theatrical in nature like “Three AM,” or the aforementioned “Let It Go.” Personally I like hearing this band jump into these more artistically-assembled tunes rather than their more straightforward-rock tracks. Mind you, with the addition of horns and some truly smart choices in their writing, they’ve managed for the most part, to keep it all less straightforward than you might think on any given track by keeping them diverse within themselves.

“Desolation Ridge,” their title-track is indeed a desolate one. Not in a bad way at all – this sounds like a true track from the old-west; or perhaps the perfect cross between Social Distortion and Neil Young. Great guitar-work here on the solos of this title-track, including some excellent harmonics and perfect tones for this tune – it might be bleak in content, but it’s rich in sound for a somewhat stripped-down song. “Whiskey Town” echoes the sad-sentiments of “Desolation Ridge” with a sliding lap-steel sound and a track that ends up sounding like an extended beginning to Blind Melon’s Soup album. This one includes that western-saloon feeling to it as well as they tone done their energy over these two back-to-back slow-tempo Americana-tunes.

They remain down-tempo for the following track “Gone” but bring up the haunting & intense elements back into the music fully. This is a wicked little song…it has a real dense atmosphere and creates a real environment. Again, it feels familiar, just like Forgotten Souls Of Antiquity promised at the very outset. The next tune will also jog your musical-memory trying to figure out where the pattern from the main verse comes from, but it will also jolt you back into place as they thunder through “Edge Of The Night.” Bringing the tempo and rock-factor up and above where they’ve previously taken you on Desolation Ridge – this track goes a long way here to break up the slower tunes that dominated the second half of this record.

It MIGHT not get any better than this final cut however. “Buenos Dias” is a brilliant song…complete with brilliant lyrics and bright & beautiful musicianship. This playful last tune KNOWS it’s the last song on this record, complete with humour-stocked lyrics to support the final moments of your experience with Forgotten Souls Of Antiquity. What a great song this would be to end the night at a live show and I’m sure they do; it was after all, a perfect ending to the warm & unique twist on familiarity and sound that you’ll find runs deep on Desolation Ridge.