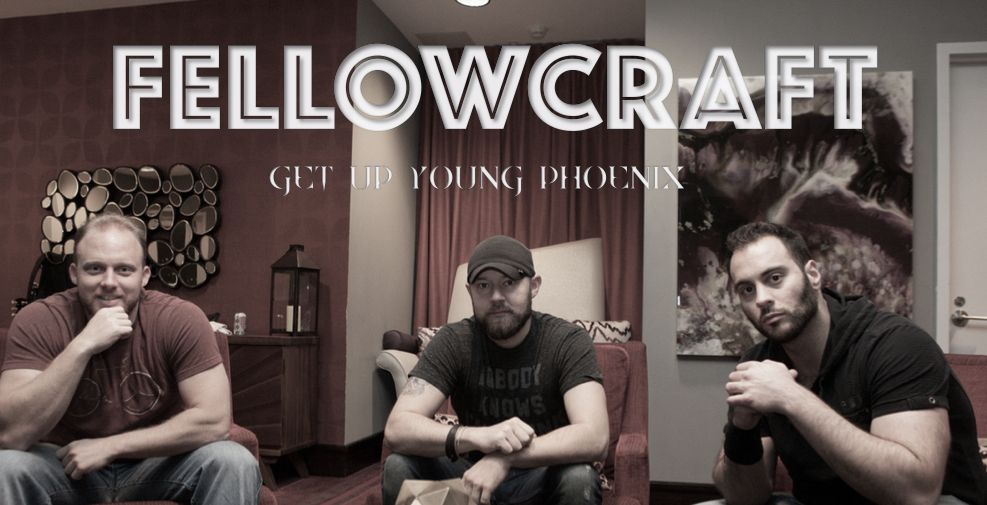 Well good then…sit the hell down and strap in for an album with plenty to chew on – Fellowcraft’s long-anticipated Get Up Young Phoenix is coming out soon…and I’m lucky-enough to have it here early to check out what’s up and see what’s changed since the last time we reviewed and previewed a few of the tracks from this very record about eight or nine-months back. From what I can hear on their brand-new, still-shiny pre-release of Get Up Young Phoenix…these gentlemen have taken that step back to examine, fine-tune & refine the material…and now they’re back and ready to really let this mother RIP.

And let it rip, they most certainly do through the smooth-rock groove and rawness of the explosions in their opening/title-track – “Get Up Young Phoenix” is freakin’ WICKED. Excellent distortion on the guitar-tones, great bass, great drums… Anyone remember Morphine? Fellowcraft and Morphine would make a kick-ass double-billing…just saying if anyone’s listening… Fellowcraft might be short of a brass-section, but there’s a very similar, undeniably-catchy, bluesy-funk that runs deep in both of their styles. “Get Up Young Phoenix” instantly puts Fellowcraft in great-shape to pull people in to listen with the hard-hitting hooks sharp and guaranteed to hit their mark. The vocals sound awesome whether they whisper softly or let it fully belt-out…tight first tune and worthy of the record’s crown as far as I can tell.

The new-record instantly shows tremendous ambition with “Glass Houses.” Somewhere in the middle of Led Zeppelin, Dishwalla and an attempt for those two to find a hit similar to Live’s “Lightning Crashes” – Fellowcraft lets you know quickly on this record that you’re not just in for another straight-ahead rock band. “Glass Houses” has a good grip on itself; the song is well-executed and it sounds much different than what I’d known from Fellowcraft so far through its mid-tempo, get-your-lighters-out feel to it…but it’s a welcoming sound/style and I think really goes a long way to highlight the versatility on the record that’s to follow.

Ok…”West Texas Blues” is rad as hell. I’m not gonna lie – this can totally be my thing sometimes…distorted rockabilly…or maniac surf-music, whatever you wanna call it…you know the types…Rev. Horton Heat…that kind of craziness & wildness. But for real – these guys are un-caged, snarling and on full-attack here in what sounds like Elvis turned up the amps for real and decided to reclaim all of rock’n’roll once & for all. Taking a moment for the bass – the solo in “West Texas Blues” is more than awesome…rad breakdown in the midst of the chaotic-slice of ripping punk-blues-rock that this song really is.

The updates and changes they made to “Long Gone” since I last heard it have made it the bigger & better song I think we’d heard was coming when they were first putting this one together. Great character and attitude to the vocals on this cut, the guitars have wicked crunch and tone…the bass and drums are smooth…the contrast is a unified one – they’re sounding great here. The ever-present element of the blues in their rock is nearly always there…but these guys are really putting themselves into the music commitment-wise now…and I think you can hear that here on “Long Gone.” If I remember correctly, its previous mix was a lot thinner than this sounds – now “Long Gone” is BEEFY like it’s been workin’ out at the gym since I saw/heard it last.

So…”A Thousand Sunsets.” This one is a tough-one. Once this song started…combined with the sound, mood, tone similar to what they went for in “Glass Houses” – you realize that they certainly are much more than just a heavy fuzz-rock band…both of these songs I’ve mentioned are very ambitious. “A Thousand Sunsets” is honestly more complex than most people could potentially have patience for; each verse and chorus wander and wind to get to their ends that I wonder if the effort will pay-off for them in this particular track. It sounds like effort and ambition like that should at least be rewarded with several listens but I wouldn’t be surprised to find out this is a somewhat polarizing tune on the record for many out there.

In contrast…especially for me…”The Dying Of The Light” was completely a massive achievement pulled-off fantastically. It’s still a somewhat more ambitious rock-song…similar in a sense to what Baroness has been trying to pull-off in their music – Fellowcraft is clearly looking for ways to innovate the genre still. “The Dying Of The Light” is a wicked-example of something you probably wouldn’t expect to find in a hard-rock song…and who knows…maybe I’m about to OUT THEM RIGHT NOW to the world awaiting…but I wouldn’t be doing my job here if I didn’t realize that much of this song is based around the concepts and even includes some of the direct poetry from Dylan Thomas’ poem “Do Not Go Gentle Into That Good Night.”

Seriously…TAKE THAT MS. TINA GRABENHORST! My literature teacher never thought I’d retain a thing. Might have taken another twenty-years post-taking her class…but would you just LOOK at who just showed HER! This guy. This guy right here with two-thumbs and not much more going for him.

Sorry…back to the music here…what was I saying? Right. “The Dying Of The Light.” Damn good song.

“Learning To Love Again” seems to make the most out of the combinations of sounds & styles that each player seems to be influenced-by and bring into the music. Much about Fellowcraft sounds built for the live-stage…the awesome drum-solo in “Learning To Love Again” has wicked rhythm & snap to it…and it’s nailed…maybe right up until the very final-moment before the bring-back? There are a couple-moments here on this particular-cut that seem to have slight timing issues where you can hear the hesitation before launching into that next part…but overall I still think they’ve put together a solid track with “Learning To Love Again.” It’s the other tune we had the privilege of being able to preview back in the day…way back when, all of nine-months ago. Vocally…between this tune and much of what we’ve heard so far…I do wonder if the people will make their connection to just how human he tends to sound. I like to think they will…there’s damn near nothing typical about the approach, the writing or the sound itself…but I think that makes it as terrifically different in many great ways. Music needs different…I don’t need to tell Fellowcraft…they clearly get that.

Where this band from Washington, DC hits it the most correct as far as their mid-tempo ballads are concerned would be on “Wedding Song.” Vocals sound bizarre…but emotionally-powerful…like…you know…that Arcade Fire kind of magic where you’re never too sure about what you’re hearing at first until it all comes together for those perfect moments…those kind of vocals. The sound is fragile…cautious…unsure…all-purposely in the pursuit of the right tones for the music, melody and performances…I don’t know – I could hear there could be an argument he’s a little all-over the map in some ways, but I’d probably counter-quickly with the organic-nature and real/raw feel that you get from the expression of emotion in “Wedding Song.” It’s a powerful tune…I think they’ve done themselves and their ambitious writing justice on this track.

“I Want It All” might maybe still have a few edges to smooth-out slightly. Where you WON’T find any issues are in the vocal-department – this is probably my favourite performance on the record for Fellowcraft when it comes to that. That being said…it sounds like there’s a slight-drop production-wise on this one with guitars maybe peaking-out just a bit…a little bit of tuning-issues or maybe a couple of slightly jangled-chords in certain-spots…but quite honestly, this has the potential to be one of my favourite tracks on this entire record. The increasing-insanity and the way it builds the drama in the vocals…I mean…we’re almost right in the middle of a genuine Isaac Brock freak-out here…and in many ways you could certainly argue that you’ve also got a song that would fit right onto an album like We Were Dead Before The Ship Even Sank. So there you are, there you have it…much of Modest Mouse has always sounded much more terrifying than this when it comes to the production in their early days…so believe me when I say – ain’t nothing here so wrong that it should stop you from loving “I Want It All.”

Turning up the amplifiers to the PWN-setting – “The Last Great Scotsman” is a killer-note to go out on. Another track that reminded me of Baroness…I think that every time Fellowcraft takes in a breath they should let loose this gravel-rasp of magic like they do in the chorus of this final track. Maybe that’s just me…I dunno…I’m just saying it how I’m hearing it and what I’ve been loving about those vocals throughout this entire album has been the uniqueness for sure, but also the real-edge to their growl when Fellowcraft chooses to rock the fuck-out. “The Last Great Scotsman” has a wickedly-tribal aspect of the track happening between the rhythm section…almost like what Pearl Jam did at the beginning of Ten on “Once” but slower…a little groovier…love the writing of the drums. The lyrics, some of my favourites on the entire record are here…but I don’t know what to tell you other than that the chorus of this last song from Fellowcraft will BURN A HOLE IN YOUR FACE it’s so deceivingly-HOT. Vocally…maybe even hook-wise I’m not 100% sure, but this is as ragingly-powerful as music gets when the switch gets thrown in “The Last Great Scotsman.” LOVED the ending of Get Up Young Phoenix – THAT is the way you do it gentlemen! Fellowcraft packs the final-punches into an album full of wild-ideas and interesting concepts on “The Last Scotsman” and in their final track, they certainly convince your ears they’ve won the battle in sticking true to their own sound and really taking the time to define it as their own, putting their most-confident stamp on it with storming-authority right here at the end of their debut record.

Find out more about Fellowcraft at their official page at: http://www.fellowcraftband.com