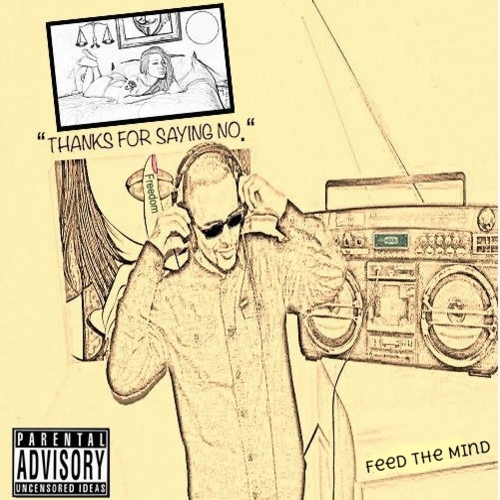 Feed The Mind – Thanks For Saying No – Mixtape Review

I suppose that this is what’s meant when someone says ‘they keep it REAL.’

Great job done here on the Thanks For Saying No mixtape from Feed The Mind; from the first listen both the moniker itself and the title of the album make perfect sense. Once you fully absorb this mixtape full of inventive & creative beats, you’ll also notice that lyrically this sounds like a socially-aware leader ready to take decisive action when it comes to our planet, how we treat each other and the ongoing tale of the unstoppable music-career of Feed The Mind.

I really do appreciate artists like this…around these parts here at sleepingbagstudios we call’em folks with something to SAY; right from the get-go with the opening track “Popcorn,” Feed The Mind comes out swinging huge with an excellent beat, exciting vibe and absolutely intelligent lyrics, meter & flow. It starts with a smartly-included sample at the front and the back with all the knowledge-bombs you can handle as Feed The Mind instantly begins to separate himself from the rest in the game on Thanks For Saying No.

You get incredible insight into the inner-workings of the thought-process driving the music and words of Feed The Mind are like as quickly as the second cut, “Isn’t It Beautiful” takes you through verse after complex verse filled with personal observations spit-out with real empathy, respect and impassioned performances. There are moments where you can hear both sadness and triumph throughout this mixtape which nearly double as hip-hop mantras to calm the mindset of Feed The Mind.

You can hear how difficult these kind of rhymes would be to put together. The way Feed The Mind manages to bend words in cuts like “Soulful Dude,” and “Anything I Want” to make them fit the meter without them feeling forced or out of place goes a long, long way to highlight what skill he has in assembly and song-writing. It’s a definitely flash of style and brilliance – and when you hear these skills in combination with what he’s actually putting out there through these words, like say in “Anything I Want,” you can hear the drive and focus…the verbal commitment that Feed The Mind gives you on every track and reminder that he’s not going anywhere; this is just the beginning.

I’ve often asked MC’s and lyrical-poets if they feel they belong to ‘rap’ or ‘hip-hop’ more as a genre, and also whether or not they came to a defined separation between the two. After years and years of listening, I’ve come to the conclusion that there indeed, is one. Like for example – I’d consider Feed The Mind a hip-hop artist…I don’t think there’s any argument for it really; each song is an indication of the pure-love, joy and vindication he’s felt from making this music. There’s no wasting his time in the gangsta-rap world; these rhymes are about REAL experiences from an outstandingly insightful perspective.

So did he drop the ball on “Kill The Ego?” Not…..really. The thing is, I know what he’s trying to say on this track – but to me, that distinction between hip-hop is alive and VERY real. To say that hip-hop is ‘saturated-ego’ is something I don’t agree with at all, but to say RAP is would be saying something I agree with entirely. I find hip-hop artists like Jurassic 5, Blackalicious, The Roots, Common…these guys are inspiring acts & artists…I think that separation needs to be distinct & clear; rap-music has droned itself into a repetitive-state, but hip-hop, at least in my opinion continues to be at the top of innovation and creativity, continues to be socially-aware and for the people. But maybe that’s just me…maybe that’s not really what Feed The Mind meant on this track…I’ve been wrong before. What I’m indisputably RIGHT about – is that aside from the wording itself in that ONE tiny spot – this is a highlight track on the album with one of the most diverse sounds for a beat to work with that I’ve heard in hip-hop.

Wait…we agree on that still right? I can call Feed The Mind hip-hop and still feel good about it? Good.

“Ideas From The Either,” is a quickly-passing track full of one massive-verse that is spit quickly, masterfully and perfectly without hesitation, pausing or a remote-mistake. If there’s something to be said for the overall embodiment of Feed The Mind, it’s certainly that he’s taken every measure to ensure a dynamic sound meets a verse spit with conviction and true-passion for the craft every time.

Tracks in the final half of the album like “Let It Sink In” and “The World My Way” have a perfect balance of seriousness & style; excellent delivery as expected on the m-i-c. Some seriously excellent beats all the way throughout Thanks For Saying No, but these two back-to-back really raise up the energy of this mixtape and bring out a couple of truly epic pieces here from Feed The Mind. “The World My Way” is a real lyrical fireworks-display of incredible thoughts as he brings a grinding desperation to the tone…but one that never gives up. The performances, words and assembly will make you a believer.

“Sweet Blood” brings the energy to a real smooth place; this track just grooves and grooves and grooves. I mean…this is VERY hip-hop right here…and it’s fantastic. The drumbeat is a simple but effective one, and aside from a few sparse key-note samples, it’s left up to Feed The Mind to deliver the entertainment through the words alone. With real swagger and a style you can’t help but nod your head along to – “Sweet Blood” is an excellent tune that pretty much anyone would enjoy.

Saying it all here in one final epic – “You’ve Got To Get Mad,” closes this album with the summation of everything that Feed The Mind has wanted to say. He’s here to stir you up in all the right ways, inspire you to be the best YOU that you can be through the lessons he’s learned himself. This final track to the mixtape is MASSIVELY huge and Feed The Mind brings his own energy right up to the rafters to match the incredible beat in “You’ve Got To Get Mad.” It’s honestly a knockout ending; you get the very best from Feed The Mind right here in words, music and performance right in this final cut.

Thanks For Saying No has vibrant beats, impactful & relevant observations and a never-say-die attitude displayed clearly all the way through on an intense mixtape that builds solidly upon itself the longer you let it play.

Find the new mixtape Thanks For Saying No by Feed The Mind for yourself right here: http://www.datpiff.com/Feed-The-Mind-Thanks-For-Saying-No-mixtape.552000.html

Tags: Album Feed The Mind sleepingbagstudios Thanks For Saying No