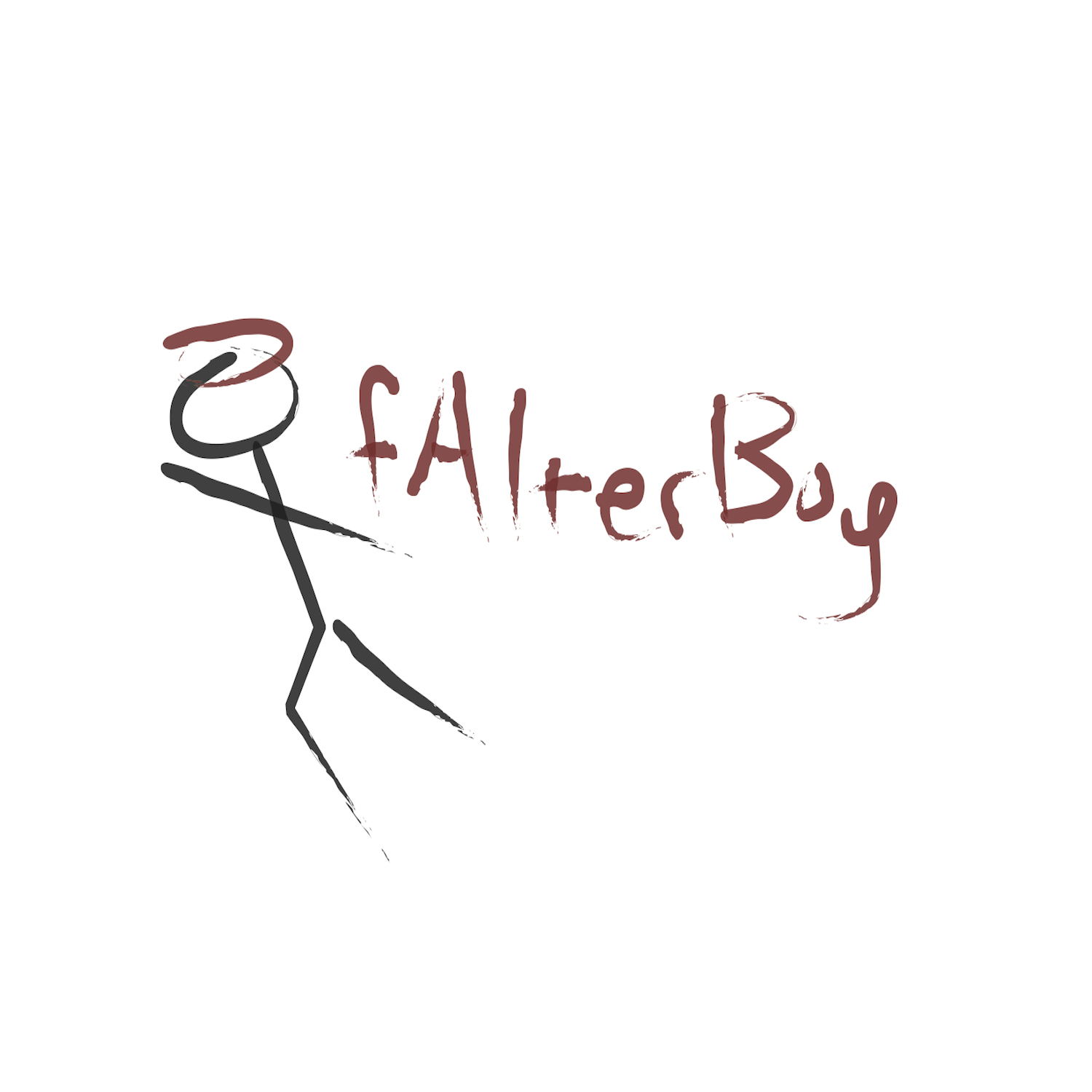 I’ve always been a fan of the idea of exploring alternative ideas and energy in acoustic or folk-driven indie-rock tunes.  Sounding much like bands I grew up loving & listening to like the short-lived Cold Water Flat or Cool For August…or something like Paul Dempsey solo and apart from his music in Something For Kate – fAlterboy fits right in with the alternative-folk crowd and definitely shows significant promise within the four tracks we’ve got here in review today.  Social media lists four founding members and three fringe-players that have measurably contributed to the sound of fAlterboy along the way, led by frontman Jeremy Schantz – it also appears that these singles come directly from their latest album Blasphemy.  It’s a nine-song record…and you already KNOW I’m always interested in hearing what an artist’s, band’s or management’s perspective is on what tunes they CHOOSE to send over…let’s see what comes through the ol’ speakers…turn it up!

I’ll go in the order in which they appear on the official record, starting with “To Cure Me Is To Kill Me,” which is the official first cut that appears on fAlterboy’s Blasphemy to make the first impression on the people out there.  The brightness of the acoustic rhythm, the smoothness of the bass and the expert joining-in of the drums all create a spectacular sound quickly as they bond together over the intro to their album’s opening tune.  Vocals and keyboards are added to the mix as the song progresses, evolves and continues to spring forward with energy in the music and gruff-melodies that come out strongly, confidently and smartly from the mic.  “To Cure Me Is To Kill Me” is a great introduction to the sound of fAlterboy and the overall energy/sound you’ll hear in the music of this band…multilayers of hooks that work brilliantly from the flow of the verse, the even stronger pull of the song’s chorus and the music carrying just as much pull towards it as any of the words you hear.  It all adds up to a seriously inspired sound and balanced approach towards this first cut…even the keyboards that appear somewhat sparsely on “To Cure Me Is To Kill Me” make an impression in a short timeframe.  Depending on the set of ears you’re listening with and how much you take-in of what you hear – if you’re anything like me, you’ll certainly hear the notable skills on the bass in fAlterboy.  Don’t get me wrong – first track & first impression-wise, they’re all holding their own without a doubt – but as the music comes up around to surround those bass-lines, I’d be remiss to not point out that “To Cure Me Is To Kill Me” keeps movin’ and groovin’ largely due to the insightfully-played and all-out inspired bass-lines holding it together.  Tight rhythm, well-played and I dig the lyrics…again, they’ve made a solid choice to start the album’s experience, and mine, with a tune that’s got real passion and energy you can hear.

Personally, I’m excited.  Cold Water Flat was one of my absolute favorite bands growing up and I never got enough of them…a band that was slightly ahead of its time during the grunge era.  Their ideas and sound would have been much more suited for today’s folk-accepting musical-climate…and I think a track like “Vinetree” by fAlterboy is completely evidence of that fact.  The tones and approach of the singers in these two bands are so astoundingly similar in their styles that, YES, I’m excited…because in a way it’s like reconnecting with a long-lost sound that I always felt deserved more than it got.  “Vinetree” has a smart blend of indie-style lyricism with offbeat & personal descriptions in the words that project solid imagery into our imaginations as we follow along.  Musically, “Vinetree” keeps the energy up and genuine sincerity in-check…I’m a big fan of songwriters like these guys that can tell a story that mentions a versatile amount of specifics in the lyrics and still have it come out as an idea we can all somehow relate to in some way, shape or form.  Whether it’s closing your eyes to imagine a certain scene described in the details or directly experiencing something similar…there’s an inviting and accessible energy on “Vinetree” that makes it have a real comforting atmosphere in the tone of what you hear.  Like the song-equivalent of someone telling you ‘it’s gonna be okay’ – something about “Vinetree” has a distinctly therapeutic feeling about it…the specifics in the lyrics would definitely lead a person to believe the song references multiple-layers of meanings and insider-info that would no doubt make the most sense to the band themselves – but they’ve really nailed the performance in such a welcoming and honest way that I feel like anyone out there would want to sit & listen to this story as it’s told.

When realizing at first that these songs were a sample-set from the Blasphemy record…I’ll admit I got a little leery when seeing “Public Service Slut” in the four tracks I had.  Not because of the language…I could give less than zero-fucks about that…but more because I was sensing more of an attempt at presenting some shock-value within these introductory singles sent over.  As it turns out…everything I was thinking was misguided; turns out it’s actually a seriously impressive song.  Lyrically, I tip my hat towards fAlterboy on this tune – they’ve nailed it here on “Public Service Slut” and that made all the difference in the world in taking it from a tune designed to make its impact through shock to an honest recollection and sharing of some of life’s most…uhh…hmm…life’s most…umm…’interesting’ times.

Okay, okay…as far as I can tell that entire first verse of “Public Service Slut” surrounds the story of a dude gettin’ his first ‘handy’ in public.  I’m just saying…if there was EVER a time to pull out the ol’ guitar afterwards at some-point to write a song about it…I’m kind of surprised there aren’t scores and scores of songs like these out there when it comes right down to it!

Anyhow…what’s seriously IMPRESSIVE about “Public Service Slut” is the fact that SOMEHOW, fAlterboy has turned this entire situation into a quirky, poetic tale that actually possesses equal parts beauty in its descriptions as it does potentially factually recount the tales behind its inspirations.  How do you make an innocent HJ become a beautiful thing? – ask fAlterboy, because they’ve clearly got the answers.  Dig the music though…it’s got some solid alternative-pop hooks that dominate the rhythm & energy of what we hear and allows some of their most uplifting tones to come through the atmosphere.  Notable keyboard solos and contributions subtly woven-in that help the music keep each section of its bars and movements solidly entertaining and a gripping amount of energy added in from the drums.  I liked all of what I’ve heard – but I won’t lie to you either…I’m still scratching my head in wonder at just how rad the lyrics of “Public Service Slut” truly are.

Now…even though I identify with and respond to the gruff & gritty contrast in the sound of the vocals in fAlterboy and have enjoyed them throughout the first three tunes…if I’m being entirely honest…I felt like there are moments on the final-cut I’ve got here called “Walking Nebraska” that could use another run-through or a bit more polish to the performance.  Understand it’s only by comparison that it becomes a noticeable thing…if this was the first song you’d heard from fAlterboy it might have a different effect…but here at the end of the set of four, there’s a noticeable difference in a couple points throughout the song.  Any weirdness in that sense is more weighted towards the beginning of the song…eventually fAlterboy settles into this as solidly as they have the rest and lock into their idea with confidence.  I will say this…of the four here, for myself personally it was harder to connect to this song – but at the same time, I have to absolutely acknowledge that in breaks between listening to this set of four tracks, each time I’d take one it was the main hooks of “Walking Nebraska” that would stick in my head.  I don’t honestly think that is ONLY because it was the last song I’d hear each time – I truly believe that they’ve written the kind of simple, powerful hook in the chorus that really lasts and is memorable for its energy.  So there’s that…I mean…I never claimed to really know what I’m talking about anyway, ever!  It might not have been my own personal favorite of the four tunes but I can sure recognize why “Walking Nebraska” could potentially be other people’s number-one cut from the four I’ve heard here from the Blasphemy record.  There is an empowered-feeling in the music and attitude of “Walking Nebraska” that really does express the freedom of breaking free of it all – I suppose that’s what I’d say came across most clearly to me personally on this final cut of the album-sampler.  The ideas are certainly there and the writing is as solid as the rest of the four…another take or mix on this cut might make all the difference in the world and push it from good to great for fAlterboy.

But overall…I’m impressed, no doubt.  I think there’s a bit of a niche-aspect of the sound of fAlterboy…but I also think the timing is much more right for their sound now than perhaps it’s ever been before.  It’ll be interesting to hear where they go from here…I can wholeheartedly say I’d always be willing to listen to what they come up with.  Musically confident & reliable, lyrically impressive and artfully written – this crew’s got some good stuff started here and I’m looking forward to more.

Find out more about fAlterboy at the official Facebook page:  https://www.facebook.com/pg/falterboy