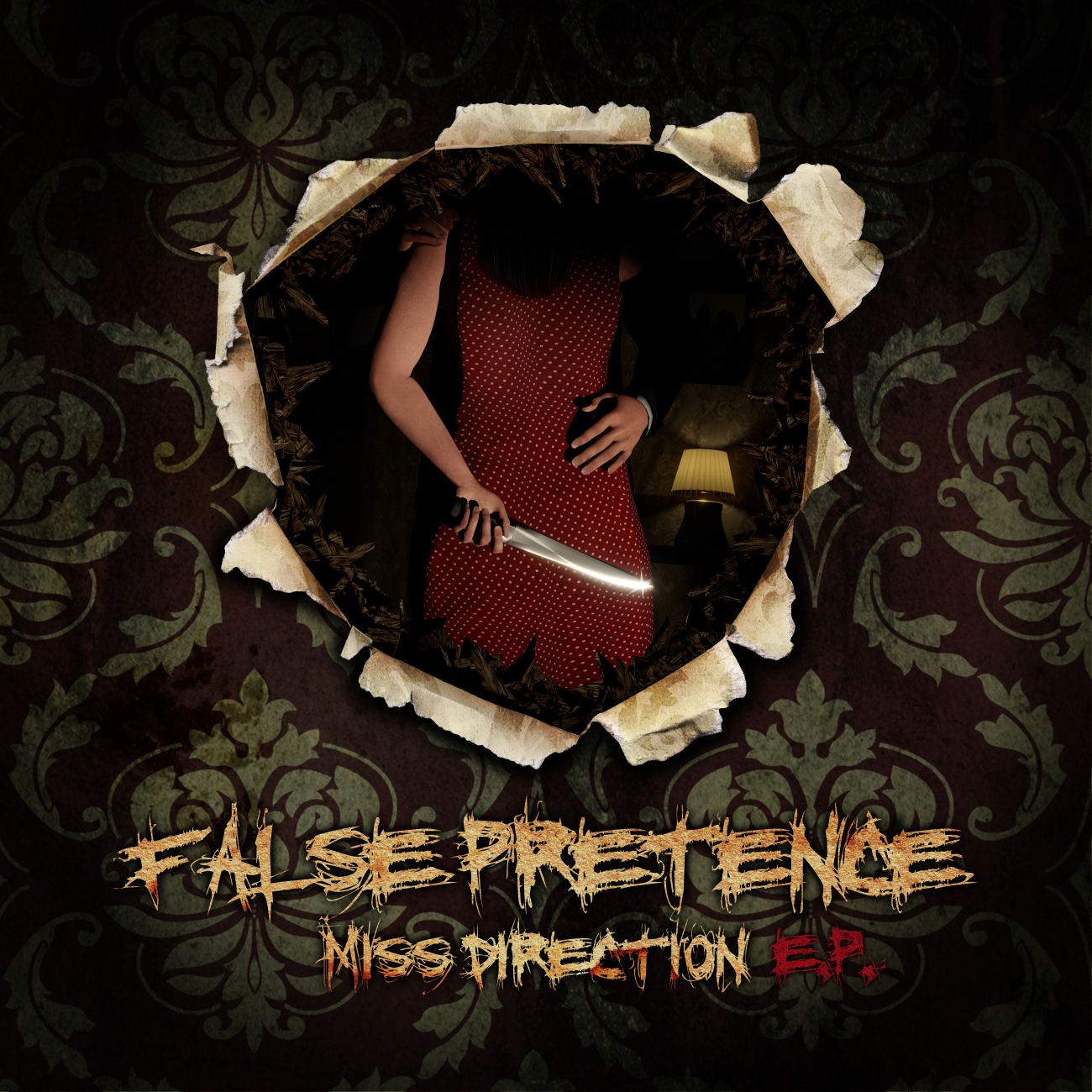 Pretty damn interesting music and overall story when you read about & listen to False Pretence. They’ve been kicking all-kinds of ass since roughly 2009 when it all began…started-up the machine and got the rock-beasts in themselves ready for world-domination. From what I gather…it was a sudden-reality shortly after in 2013 after the release of their first digital-release Falling Apart and the single “Faceless Faithless,” touring with some major-mainstream acts, being covered in reputable-print from places like The Huffington Post. It was all on what seemed to be on the right track…which makes you wonder what might have been…or what might have happened along the way…

I can provide a little insight here…just not facts…so don’t go quoting me on this one… First off…they toured with Papa Roach, who I’ve relentlessly tossed from side to side all over these pages in examples of the mainstream acts that should’ve long-drowned.  So…my instincts tell me…that the break that False Pretence took due to the experiences in 2013 tell me that they discovered just how hollow that world could potentially be – and the reality of playing the same songs tirelessly night after night. They’re so much more polite about it mind you – the way I see it phrased here mentions that the ‘overwhelming experience of touring with world class artists inspired the band to focus on writing a great follow up release and refresh their image and brand.’ What nice guys eh?

So again…I’ll say it for them cause they won’t – they’re obviously way too polite. Fuck Papa Roach, with the exception that they provide amazing inspiration for wanting much more from yourself musically and the need to write better songs. Hell…they’ve even done that for ME and I’ve never even toured with them or seen them play live.

Question of course being…did the break pay off? Did False Pretence come back better than ever after the refocusing? I can’t speak to the music of the past…but I can tell you that their Miss Direction EP is right on-target. This band pounds with an extremely-impressive alternative-energy that borrows from metal, punk, progressive, rock and their own brilliant-minds. I’d assume this band is around the same age as myself…you can hear that these guys grew up through the 90’s and 2000’s like I did, becoming influenced by the electrifying alternative acts as they rose to dominate the mainstream for two-decades before surrendering entirely once again to electro & pop-music, of which we currently find the world mired-in once again. Bands that string together clever-twists like False Pretence are on Miss Direction give rock/alternative the chance to bring it all back.

First of all…these pieces absolutely fit and completely work together on every level. Tom Bevan…holy fuckin shit…seriously…this is one formidable beast on the drums – this guy pounds with authority, relentless making the skins suffer for simply existing as he drives the beat in the opening-track “Fantasy Kills.” The complex & stutter start/stop guitars from the combo of Adam Wain and Paul Geheb instantly grab your attention…the bass of Ryan Hicks supplies the low-end thunder in combination with the incredible double-kick beat-down supplied from Bevan. Again – it all works…but perhaps their best-weapon is the confident and killer approach to the vocals from James Graham. “Fantasy Kills” shows incredible instincts from False Pretence as an entire band as they add multiple-parts, intense-structure and massive dynamics into the writing. Graham sounds bold and unafraid – a real pro with all the grit & determination you wanna hear in the voice attacking the microphone amidst the expansive sounds of rock continually enveloping the sound around him. Though he won’t stay in any one gear for too long…the opening tones of his voice sound very close to that of Gavin Rossdale before he switches to a tone and style that’s closer to Brandon Urie and the franticness of the sound of Panic At The Disco. The music itself, generally remains much harder, thicker and aggressive than anything you’d find from PATD…but the similarities are certainly there between the singers of these bands…and that’s a damn good thing in my books. Not only that…but in all seriousness and keeping in mind that I am actually a massive-fan of PATD – what in the all-fuck is going on in Urie’s mind right now anyhow? I’ve heard the new-single co-written by River Cuomo of Weezer – another band I love…for ENTIRELY separate reasons that should have remained so. The resulting combination of mechanical, formulaic, alternative-pop insincerity almost made me puke my breakfast back up…honestly…it made me fuckin’ sad to see how far this band has fallen after Urie watched himself become the final remaining member of PATD over time. But as they leave behind the frantically-intense and melodic-rock…perhaps that creates the opening a band like False Pretence needs to jump in and fill the need with something powerful and awesome like the Miss Direction EP. Though there are certainly incredible-hooks that delight the ears in “Fantasy Kills” – this doesn’t sound forced, it sounds FOCUSED – just like they promised you all it would be.

Bevan…good lord man! I feel like I’ve somewhere mentioned this guy along the way before in another review somewhere for all the same reasons…consequence of reviewing so constantly I suppose…but something about that name seems incredibly familiar to me… The way this guy kicks is a weapon in itself…you know how like…when a boxer punches you in the face outside of the ring in a public-place and they can be subsequently charged with ‘assault with deadly-force and/or with a deadly-weapon?’ I’m telling you the same could be done to Bevan were he to kick you in the shins during a soccer match. He is an absolute MONSTER of the drum-kit and certainly deserves a large amount of credit for driving the energy in the music with parts that really move…hell – they pretty much shake the earth around you! As he beats us into the rhythm of “Miss Direction,” the guitars spiral in and start to thunder & crunch as the vocals come soaring into the mix. Graham puts in some of his best harmonies here…and the verse just after a minute-in is one of his most confident-best; and even still thereafter he finds an equally incredible chorus that really highlights just how much tone he can have. Nearly a minute later, he’ll remind you he’s capable of the growl/scream combo just as easily…depending on what the music calls for – Graham supplies in spades and delivers the perfect amount of energy, grit & grind or melody whenever it’s needed. Powerful music, extreme performances…flawless delivery and end-results; for the genre I’m toughest on by a longshot – these guys are killing it with some seriously impressive music and precision-focus.

The Miss Direction EP wraps-up with the lead-single, “Faint Reflection” – a song of which you can preview at their Soundcloud page while we wait upon the official release of this new recording. A little more geared for accessibility – False Pretence puts their electric-alternative-energy right on display…roaming between sounds you’d find on Chevelle’s This Type Of Thinking (Will Do Us In) and that slightly Bush-sound to the grind of the guitars and harmonies. Incidentally…those of us in Canada will remember that the band Bush went through a legal battle here due to another Canadian band of no-fame or potential being called Bush as well. As a result, Rossdale’s band was known for a while as BushX here in Canada – can you even believe that shit? I mean…first of all, don’t call your band something as generic and flat-sounding as the name Bush…but secondly, I mean, C’MON!

My point in saying that…is that in the case of Bush, it was simply another alpha-character at the end of their name; if I’m comparing False Pretence to anything Bush…I want you to know directly that I’m using that ‘X’ as an alpha-numeric character…as in, if they ARE anything at all like Bush – they’re easily Bush times TEN. The aggression is sharp and biting – the guitars are complete behemoths and “Faint Reflection” quickly starts to lay the hooks out to catch you from every angle as this song builds upon itself with intensity and melody throughout. It’s a great choice for that first taste of music to come out from the band after their break & time away…it gives you an awesome sample of their style, sound, determination and true-grit – but in my opinion, “Fantasy Kills” and “Miss Direction” were the real meat on the EP. So it’s kinda like the first-date that won’t completely give it all up when sampling “Faint Reflection” before the rest of the EP…but as we know, with a little patience, waiting and persistence – you’ll eventually get all that you need. I think that’s the best case scenario – “Faint Direction” stands a chance of pulling in the largest audience into their solidified, unified & refocused sound, but it doesn’t give it all away or blow the whole-load right in the one song.

None of these songs on the Miss Direction EP were even longer than four-minutes in length – and everything felt as full as an entire album once the three-songs completed their cycle. False Pretence have created a seriously storming, determined and confident effort here with their new EP – I have every reason to believe this would catch on massively with fans of anything from those two magical decades of alternative-rock I referenced…and a strong hope that bands like this will lead the way to securing rock-music’s rightful place at the top of the volume-knobs in our present-day.