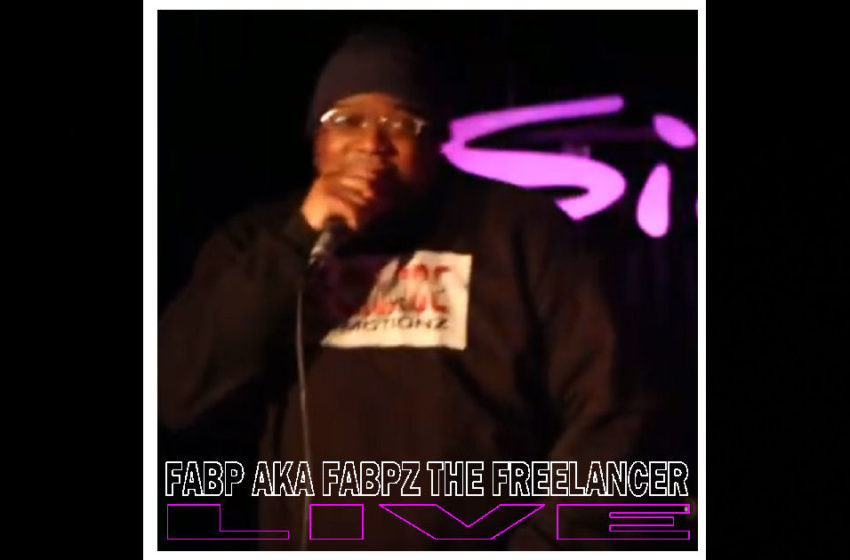 If you tuned in to the recent episode of the SBS Podcast from this past twenty-four hours or so, you’re well familiar with the name Fabp AKA Fabpz The Freelancer by now!  We played three of his cuts on the show plus a collaboration between the studio here and him way over there where he’s at, chillin’ in his crib & rockin’ the mic for X-Calade Promotionz – and of course, a whole ton of information from the main man himself in a special interview edition of our show.  So if you haven’t checked that out yet – be sure to do that here and you’ll find out a bunch of cool thangs about Fabp AKA Fabpz The Freelancer.

All that being said, if you peep this video here below too, you’ll see a lot of what I admire about this guy.

You see it?  You hear it?  Yeah you do – how could you miss it?  That’s a humble emcee right there is what that is…Fabp AKA Fabpz The Freelancer is a stand-up man and an all-around good guy – you can tell from the way he introduces this song, right up to the way he exits the stage when he’s finished – the man’s polite, he’s all about good-times, and ultimately, he fearlessly takes on bars of all kinds in all different styles & sounds, ready to freestyle his way to a victory.  He doesn’t think in terms of pass or fail – in fact, I’d be surprised if he says ‘no’ to anything at all – Fabp is always up for a challenge and I got full respect for that.  He’s not concerned with who does or doesn’t dig on what he’s layin’ down – he’s got no time for that…if you like it, listen, if you don’t, as he mentioned on the show, there’s plenty out there to choose from – dig through those record crates, do whatever you gotta do, but get some new TUNES in yer face!  He’s making music for those that feel the vibe…the rest is all inconsequential.  In that respect, if you dig what you hear on “Till I Flow Dumb,” it’s fairly safe to say you’ll like a lot of what Fabp AKA Fabpz The Freelancer creates and you should be pickin’ up more of his cuts at X-Calade Promotionz.

Look…I’m no stranger to Rap/Hip-Hop from all over the world – in fact, many of the artists that Fabp ended up listing as influences in the interview we just did confirmed we grew up on & love many of the same pivotal artists like Kool Moe Dee & Biz Markie from back in the day.  Fabpz The Freelancer’s own style, movement, and sound is definitely born from that era…which, while you might assume that would pose a challenge for the modern-day mob of the masses out there potentially listening – like he’s pointed out on the show, there’s plenty of audience to go around.  People are finding his music, people are spinning the tracks, and as long as they do, believe me, Fabp will definitely be around to make more.

For real though…show the man some respect.  He’s got like a million songs first of all (give or take one or two, but I sincerely lost count) – and he’s spittin’ these thoughts off the top of his dome most if not all of the time.  Fresh, unfiltered, raw, undiluted…as the man himself would tell ya.  Not only is there obvious risk involved in that & varying degrees of what works really well & not so much – but on the flipside, the creative rewards & benefits as an artist…the thrill of the challenge from the pure love of the game…I mean…that’d be highly addictive stuff homies.  And clearly Fabp AKA Fabpz The Freelancer is always jones’n for the mic…around the clock, this man is lighting up the studio booth and gettin’ it DONE.  Now YOU go ahead & try it…especially if you’ve never tried freestylin’ bars in your life before…go ahead, we’ll wait on ya, but find yourself some sixteens and spit as many thoughts as you can before you run completely into the wall or out of gas.  And then realize that Fabp always gets through his cuts; recognize the fact that he’s done it hundreds & hundreds of times…you gotta admire that.  I know I couldn’t do what he does!  Not only do I lack 150% of the courage he has as a performer, but I can only write my thoughts down…I can barely speak two clear sentences back-to-back without mumbling, let alone spittin’em clearly into the mic, time after time, track after track, like Fabp does so consistently.  Like I can’t even imagine getting up on stage with just a beat and sheer will power – yet you can see right through the video we all just watched, he’s right at home, ready, willing and able to just hop up there and spit some freestyle bars for the people like the rest of us all need oxygen.  This is what he wants to do – he’s set his mind to it and he’s going after it with everything he’s got.  Ultimately – no matter if you like it, love it, pass on it, or play it – you gotta respect how much passion Fabp brings to the mic, how much sincere enthusiasm he has for his craft, and his tireless desire to truly entertain ya.

Find out more about Fabp AKA Fabpz The Freelancer at his official page at X-Calade Promotionz here:  www.X-CaladePromotionz.com