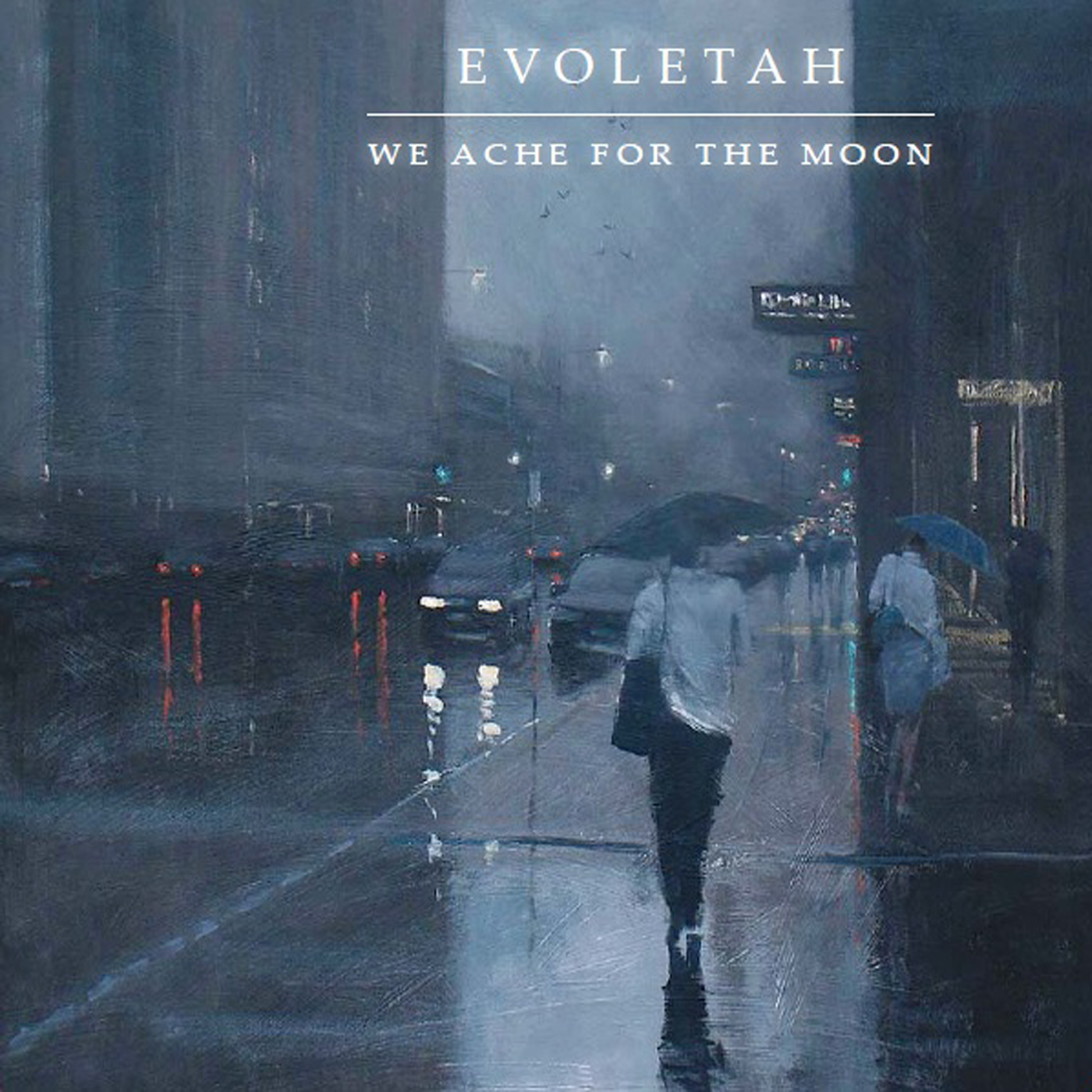 Evoletah – We Ache For The Moon – Album Review

I remember way back when I had first lived with my studio partner, Rob @ SBS, long ago before our studio ever existed and we were just tuning into the different talents for music that we possess. It was one of those seemingly endless summers of youth; full of bright beautiful British Columbia colors, late nights and completely too much fun. Completely identifiable as the year 2003…some things you just never forget…

I was in the most full-blown stage of my musical piracy that I would ever come to know. I wasn’t just downloading a song or two at this time – I was downloading the ENTIRE internet. It was back in that time where each of our internet providers promised an “unlimited service” – to which even to this day most people would believe to be true. Then there’s me.

At that time – I had been downloading such a filthy amount that I had actually found the limitations of their “unlimited service.” The providers would call the house and tell us that we were currently downloading at the rate of FIVE TIMES the average business, never mind a residential address. All of those amazing songs and sounds we heard that summer remain firmly in our collections today, and for the most part Rob @ SBS was able to fend off their threats to shut down our internet service by asking them to hold for a moment while he would ask – “Hey Jer – are you almost done downloading the ENTIRE internet?”

To which I would assure him – “Yeah man, should only be another two weeks and I should have the entire thing.” He’d get back on the phone and let them know it really wasn’t that far away until we had it all, and they just had to hang on a little longer. There were so many new sounds that needed to be heard and absorbed – the process could NOT be interrupted. We saw ourselves kicked off of one service only to join the next. Only one thing was absolutely certain – we had to have it all. And to this very day I still remain just two weeks away…

I’m bringing all of this up because in that time frame of listening to immense amount of music – it took a completely standout SONG and an unbelievable feel to the opening of an album to jump right into the line-up of already verified solid tunes we would be playing each day. Many of you will know just how RARE it is to get that CHILL up and down your spine from hearing the opening notes of an album, and just how concretely that feeling will stay associated with the music over time.

EVOLETAH – the actual band supposedly being reviewed here today – brought me right back to the moment I heard “2+2=5” opening up the Radiohead album Hail To The Thief. Looking at this page’s worth of pre-amble now…that’s a lot of build up just to get to this particular point and truly start the review on Evoletah’s new album We Ache For The Moon – but understand that a Radiohead comparison does not come easily for me…it’s a kind of musical hallowed ground and not something I want to throw around lightly. But there it is, right here in print – this new band from Australia has created an album opening as incredibly haunting and chilling as pressing play was in 2003 listening to Hail To The Thief come on for the first time. And my point? I will just as easily remember where I was this week in my life while discovering the music of Evoletah, ten years down the road from now.

It also instantly invites the question for many of you; “If the comparison is to Radiohead – then what the HELL is there not to like?” So I will respond pre-emptively by saying this; if you’re looking for negatives in this review you may as well click onto one of those other indie music sites for a review on something else entirely because you are not going to get that here today. This album by Evoletah is nothing short of incredible. In fact – that opening hit me SO HARD that I instantly jumped online to share some of these thoughts with the band the minute I had a chance to press play for the very first time.

Absolutely stunningly beautiful all the way through from moment one to the final ending of this nine-track album – the opening track “Halfway” puts all the elements and skill of Evoletah on the table within mere seconds. The tone on the guitars throughout this track (And again, the ALBUM entirely) are pure gold. Lead singer Matt Cahill asks the question “Will you meet me halfway?” Let me answer by saying that if this is the quality of the music their making – I’ll go beyond the halfway point easily, in fact, I’m already THERE.

There are two other bands I’d like to include as sonic references for you that I believe echo much of the creativity in songwriting that Evoletah displays; a lesser known band called Paloalto and another that you might know already called Pink Floyd. If you were to combine the production of Radiohead, the structure of Paloalto and the jazz-influence of the more artistic Pink Floyd songs – you’d get something very close to Evoletah. And since merging those three bands is not likely to happen anytime soon – I’m EXTREMELY thankful to Evoletah for jumping in and filling this gap in the sonic universe. Take the second track on this album called “Time” – this is literally the jazz version of “The Great Gig In The Sky” by Pink Floyd. It has this incredible, smoke-filled lounge feel to it, with vocals coming from Katie Underwood this time in one of what becomes MANY beautiful and flawless performances on this album.

Really! I’m in love with that voice. She has the ability through her jazz-influenced background to really add herself in as another instrument and the contrast between her vocals with Cahill’s results in fragile sounds that evoke emotion, guaranteed. Whether it’s the quiet, haunting desolation in a track like “The Eleventh Hour” or the dark & hopefulness of “Black & Blue” – these two complement each other fantastically and have really got themselves onto something spectacular here. As far as I can see from their bio, Katie has been writing this album with Evoletah for this past year…but no word on her being a finalized part of this line-up that I can see…yet. I can’t be the only one who can hear just how special this combination is and it would be my true hope that the collaboration continues into more albums in the future or becomes a permanent evolution in their sound.

You can also understand and hear just how well she fits into this band by listening to the track “Guillotine” – her voice along with the well-placed drums of Jason Eyers-White develop that audible tie-in…that moment in clarity where you can hear how well she fits in not just with Cahill – but with them all. The addition of strings and saxophone take this track into new musical territory on the album, again highlighting their creativity and their immaculate songwriting together.

Now – as wonderful as she is – it would be extremely far-fetched to say that they don’t crack the musical bat just as hard without her prominently on a song. A song written as strongly as “The Forgetting” is something a band can work at for years and years, come close and still NEVER achieve – but Evoletah displays through this song ANOTHER side to their music, one with lighter pop overtones that works unbelievably well. Leading into “Everyone Waits For Nothing,” – a lyrical masterpiece and bone-chilling, sparse track that really highlights their clarity in sound and the true art of perfecting a track.

Did I mention that was track number EIGHT on the album? With only nine songs on We Ache For The Moon – there is NOWHERE for Evoletah to hide themselves. They’ve made an album with such an unbelievable amount of consistency and depth that there is no need to bury anything in the mix – it’s all on display; each song is like a welcoming invitation to listen to the next.

The guitars of Andrew Boyce and bass from Michael Shanahan work together as a team solidly throughout this album and are once again put on crystal-clear display in the final track. “Thirteen Moons” is such a perfect ending to this perfect album and nearly ventures into the sonic territory of post-rock bands like Explosions In The Sky, and much like that band – Evoletah continues to express the emotion through the music of the band and in complete harmony with the rest of their album but this time without singing a single word.

There is nearly nothing I like better then when I absolutely KNOW I’m at the end of an album. A consistent and well laid-out album is just like the experience of listening to an amazing speech – you want to KNOW when that speech is over; you want that finality in the statement. If you’ve ever seen a speech where the speaker has no clear ending and the whole thing kind of just, well, ENDS – it can nearly drain the life out of much of what had been said previously – and the same can work for an album easily. This is where we all get divided into the “album” listeners and those who listen for the “songs” they like. I can happily straddle the fence between these for sure – but it is simply undeniable to me or to ANYONE when you listen to an ALBUM with an overall idea and not simply a set of new songs.

We Ache For The Moon is consistency at its finest hour; my words cannot possibly recommend this music to you all strongly enough. This is music as art through and through; satisfying in every one of its elements…an album that after listening simply makes you feel like you’re a better person than you were before you heard it.

Definitely go and check out anything you can by Evoletah! Check out the Official Homepage: http://www.evoletah.com/