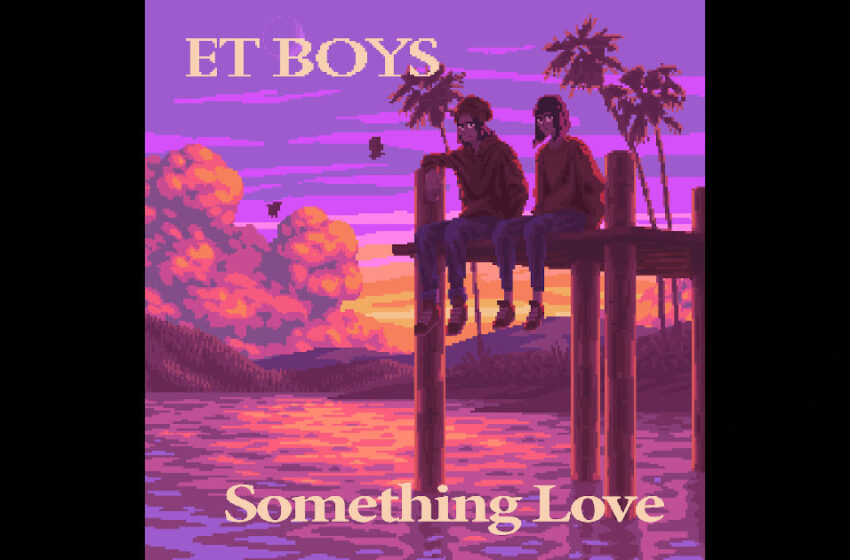 It’s not like it ain’t out there & has been for years folks, you’ve heard the sound under a million different names by now…like all genres, it’s an arbitrary tag.  We all gotta go with something I suppose – so Nu Pop it is!  I’m not here to dispute the choice, just the relevance of any/all genres whatsoever.  Cheers.

What I can tell ya for sure is that I like what I hear – and chances are, you will too.  Whether you call it Retrowave, Indie Emo, Melodic Rap…Nu Pop…I’ll completely leave that up to you and how much weight you place on the importance of labels – I’m just here to tell ya what sounds good, and this is that.  As far as I’ve read, the ET Boys are a crew of two…you’ve got Sharkeyes (Music) and Tacboy (Vocals/Lyrics) as the two main dudes at the controls…brothers apparently.  Not sure if that’s biological or purely through music…maybe there’s a different mom or dad in there somewhere…all I’m saying is that if you have a look at the pixelated characters that appear in the title of their lyric video, they look pretty different from each other.  But I ain’t here to judge all that, nor would I want to.  I know where my lane really is.

So I’ll stay in it…which is on land Sharkeyes, apologies.

This is what I know for sure.  “Something Love” is the second single they’ve released, and chances are, they’re already well on their way to being the most addictive new band on your playlist if you know’em – if you don’t yet, then make some room at the top because you’re gonna wanna hear what they’ve come up with.  Their first single “Sober” should have been enough to put them permanently on the map & on your radar as far as I’m concerned – given that this crew was just getting started and there was just the one other single out there so far…of course I had a listen!  Truthfully, I’d be hard pressed to not say it’s a better song, or at least has more widespread potential for what’s happening out there in the scene right now – they sound freakin’ great on both cuts, but “Sober” really has the pulse of what’s relevant today not just sound-wise, but also thematically as well.  “Something Love” has a theme that has been with us all for years & years & years…it’ll never get old & likely always be relatable – and perhaps in that sense, it has the edge on the former single…maybe…time will tell.  Bottom line is, they’re really both irresistible cuts and that’s the facts, Jack – I dig the vibe of the ET Boys and I can totally get behind it all.

Where the ET Boys have got themselves a major advantage is right there in between the skills they already have, and the way they’ve doled out the responsibilities.  Having Sharkeyes handle the music and Tacboy handle the mic…we all have our strengths and they’re clearly playing to them by having the right pieces in the right places – and you can hear how well that’s working out by how tight these first two singles have truly come out.  Tell me what doesn’t work!?!  There’s not a fraction of “Something Love” out of place…Sharkeyes clearly knows what he’s doin’ behind the studio boards, and Tacboy has no problem at all handling the mic with confidence in front of them – and the balance is pretty much split 50/50 right down the middle when it comes to what makes an impact on us as listeners.  Not only is that awesome for US – that’s awesome for THEM too; we all tend to get wrapped up in what we identify with most in music, be it a singer or a guitar player or whatever the heck – but when you hear balance like you’ll hear in the strengths these two brothers have, it only makes sense that they’re making music together.  This is where the ET Boys belong – and their first two singles alone will prove that to ya, 100%.

So let’s see, let’s see…what works…and what would I advise them on for the future to follow?  Good questions.  Honestly, everything I’m hearing is entirely relevant, and they’ve done an exceptional job with the quality in what they do from the production to the performance itself – all this stuff is positive and checks all the right boxes.  While I wouldn’t necessarily say that a track like “Something Love” sounds like it’s gonna end up as the most challenging cut they’re ever gonna have in their catalog – I can also appreciate that we all gotta walk before we can run, and certainly dig on the fact that they’ve rounded out every corner.  Maybe it’s not seriously complex, but it’s flawless – and believe me when I say, that’s no easy accomplishment by any stretch of the imagination no matter who you are or who the heck is in your band.  Less complex in design actually means there’s significantly less room to hide – if there were any savage mistakes or missteps along the way, we’d hear’em all – that’s the reality.  Much to their credit, the ET Boys leave you with zero to complain about on “Something Love” – it’s as tight as tight can be, it’s loaded with accessible vibes built for the right here & now of what’s happening in the scene, and they’ve got verifiable hooks that exist in both the music and the vocals they’re rockin’ with.

Like I said – all good things.  Lyrically…I could get all grey-bearded on ya and point out the obvious nature of words that reflect the generational gap but that’s boring – what I’d advise them on is to really focus in on what suits the song best and continue to tap into that.  As in…for a song as remarkably sweet in sound & theme as a single like “Something Love” genuinely is…I don’t really know for sure if we really need to beat someone’s ass in the middle of a love song, or if that actually ends up taking away from the experience overall – that’s gonna be a much more individual thing I suppose.  I get where they’re going with that…it’s still an expression of the strength of the love that exists…and shit, I guess people still throw down over stuff like this?  I’ve been married and outta the game so long I literally have zero idea.  In my opinion however…as real as emotions like that may be…the point is whether or not that serves to increase the overall accessibility and appeal of a cut like this to the masses or whether it might actually take something away – I don’t really have an answer one way or the other, but it’s worth considering.  I mean…it’s really all they’ve left me with…the rest is essentially unquestionable perfection; there’s nothing to complain about here, so I can only observe and muse on their future to follow – because there’s no doubt they’ve got one.  The ET Boys are ready to go & level-up this early on into their career…they’ve already shown us two genuine glimpses of the greatness to come, and I felt like both their initial singles prove we can expect big things from this duo.  Smooth electro-based sound, solid vocals up front on the mic…and a fantastic gift for melody that’s shared between them – if they keep the quality of what they do as consistent as what I’ve experienced in their first two singles…I’m hearing nothing else but green lights ahead for the music of the ET Boys.

Find out more about the ET Boys at their page at Instagram here:  https://www.instagram.com/etboysofficial