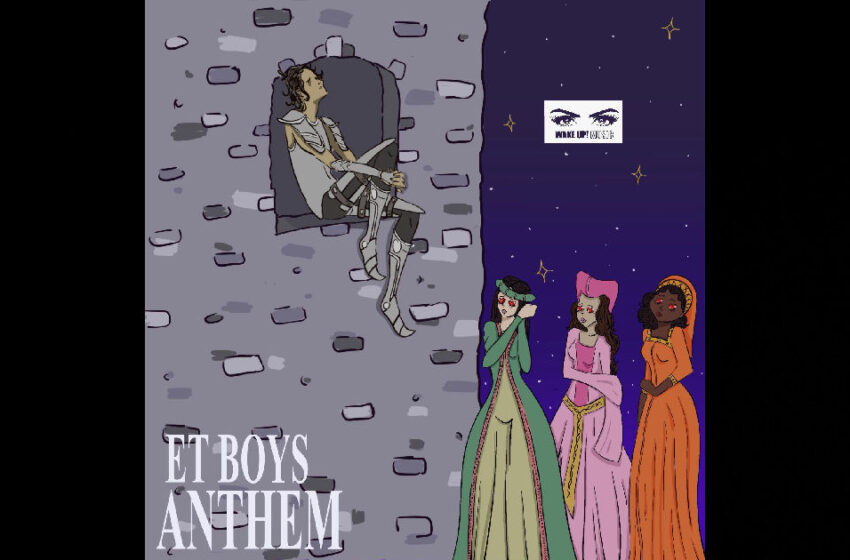 Well would ya look at that…the prodigal sons return!

Chances are, if you’ve been following along with these pages of ours, you recognize the name ET Boys, which features our homies Sharkeyes and Tacboy – the latter of which, was a guest on SBS Live This Week earlier this year just prior to the heat-waves of summer.  If you caught that show, right on – please know that you’re among my favorite people on Earth.  If you didn’t…I mean…I probably wouldn’t worry about whether or not you made my Christmas card list…that mailbox gonna be dry yo.  Anyhow.  Even if you didn’t catch the show, if you’re one of our regular followers you’ve read up on the ET Boys here in review plenty in the past with me checking out cuts like “Something Love” & “Long Night.”  I think their cut called “Sober” is still among my favorites…of like…ALL-TIME…but you get it, you probably feel exactly the same way about it that I do if you’ve heard it…and if ya haven’t, you’re fully missing out.

Now we’re onto “Anthem (Part One)” if you’re just catching up, with ET Boys back in action this year.  Word on the street is that they’ve got a full record coming soon…I’ve been hearing that rumor from a fairly reliable source at their label, and you can see the promos running on their main website too – so I’m inclined to say the day is ALMOST here.  These guys do what they do really well…and they’re filling a void in music that’s got them rocking in their own unique spot, which I feel like listeners will appreciate.  ET Boys have got a sound that’s relevant enough to be on the fringe of what’s happening out there in the mainstream today without losing their indie-cred, you know what I mean?  They blaze their own trail, they make their own rules, they do what comes natural to them, and clearly it’s been getting results.  Each and every cut I’ve ever heard from them has continued to build their legacy from day one, and I’d imagine they’ve got a whole lot more in the tank to reveal this year when their album comes out.

“Anthem (Part One)” slows things down for a moment…not their momentum, just the vibe – it’s what you’d probably call a love-song in the modern-day era.  Great atmospheric beat from Sharkeyes, who handles the music part of this duo & production & all that – and Tacboy’s at his devious & mischievous best once again, laying out a set of lyrics that are guaranteed to make you raise an eyebrow or two as you listen.  He’s got a master’s grip on how to drop a line in the middle of a sincere melody that’ll seem like it comes straight out of left field, making you wonder if you just heard him say what you think he said – and yes, trust me, he did.  He’s got a great way of disguising his meanings through implications and innuendos…for example, lines like “residue left on the desk from your company” are pure fucking brilliance…you could take that a couple of different ways, and they’re basically ALL awesome.  It’s the kind of line that your moms and dads aren’t gonna catch, but everyone from their generation knows exactly what they mean…ET Boys make music that’s genuinely built for the modern day era & mindset.

This works out well for them…if anything, the reality is, 2:39 is REALLY damn short when it comes to the music of ET Boys…there’s practically no doubt that if you dig what you hear on “Anthem (Part One),” that you’re gonna want a whole lot more of it.  And tough titties on that y’all – 2:39 is all there is.  You do however have a repeat button on your playlist somewhere though, and I highly recommend keepin’ it handy.  The hooks on “Anthem (Part One)” are memorable and as addictive as you know this duo to create from the music to the microphone, and it’s definitely a cut that’s gonna have you looking forward to that new record of theirs coming soon.  When?  I don’t fucking know!  Listen – I’m not the internet’s gatekeeper – I’m not Siri – I’m not a calendar…but I’m hoping it’s sooner rather than later…because just like they say in this single, “It’s the time now baby let me hit it.”  Get that record out there homies – let’s fuckin’ go!  I’m very much lookin’ forward to hittin’ that set-list from the front to back when their album comes out, yes indeed.  ET Boys create stellar singles, just like this one here – so you gotta imagine an album is even better, because MORE of a good thing, is exactly that.

Find out more about ET Boys from their official website at:  https://etboysofficial.com