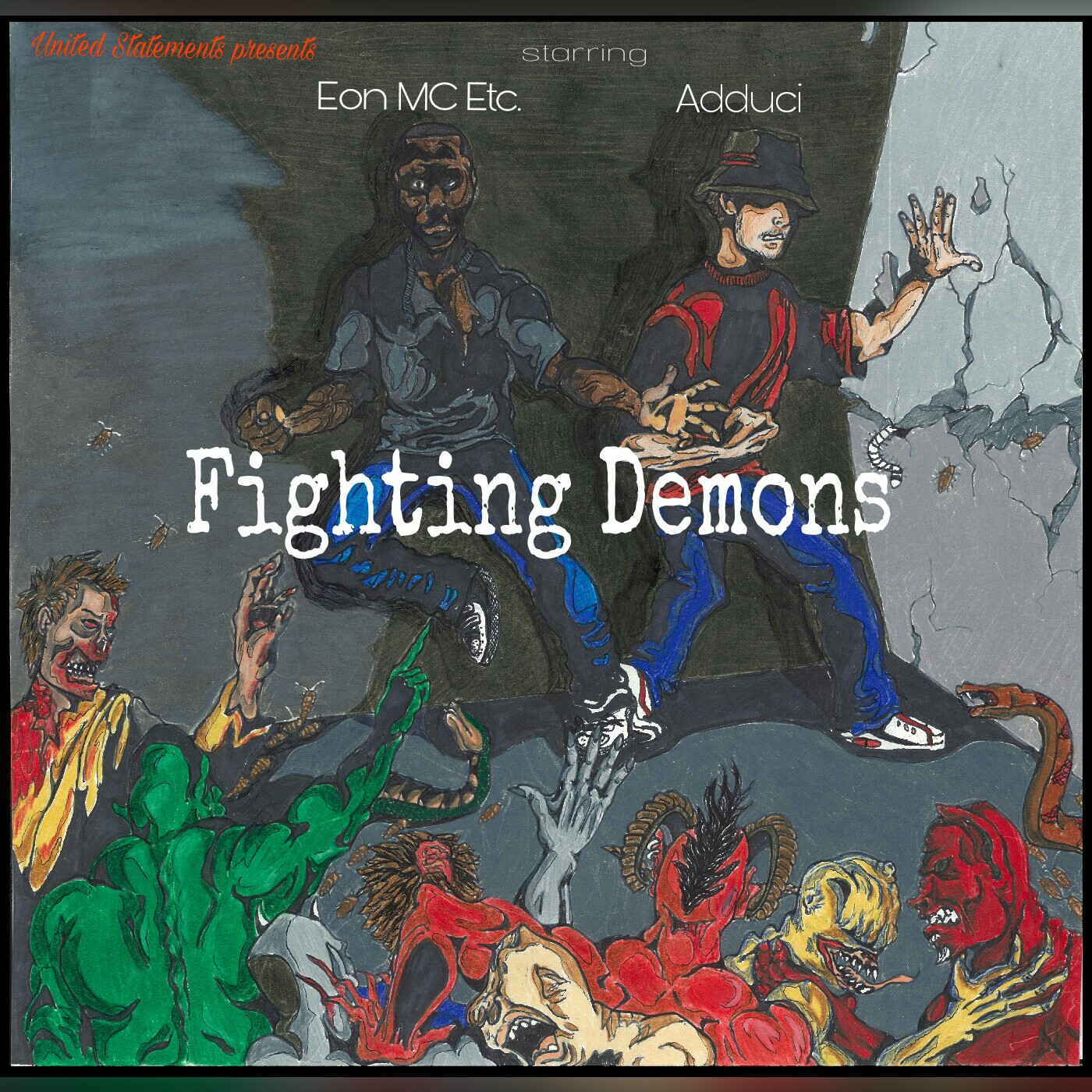 First time I had actually heard this new record presented by United Statements…I listened from the Soundcloud page.  Why is that important, you ask?  Well…sometimes pushing play there can give you mixed results in terms of how a record might flow – and in 99% of the cases due to the site’s programming and the way we upload our music in logical, sequential order…Soundcloud likes to take that sense you’re making and flip the script to turn it all ass-backwards once it’s up on site.  Not the fault of these two emcees and I’m not even complaining when it comes right down to it…for a lot of artists and bands out there all I’ve done so far is write an entire paragraph stating the obvious and something they’ve already no doubt experienced one or many times.  BUT…regardless of whether you do or don’t know how this all works…if you’re not even thinking about it and just cruising along listening to new music, you STILL might even miss the fact that a record is in reverse order and just push play…like I did with the new record from Eon MC Etc. & Adduci.

I did correct all this just by listening through Spotify instead…but the ENTIRE reason as to why I truly brought this up is because first impressions COUNT…and what I did in making that mistake could have potentially cost Eon MC Etc. & Adduci…

…thankfully it did not.  In fact – SPOILER ALERT – shit gets seriously creative and incredibly real at the end of this record…you’ve been told.  We’ll get to it all later, but to make the point as clear as I can – the first tune I actually heard was called “Lonely Highway,” which finishes off the record in a completely artistic style…and I was honestly blown away by the creativity I heard.  In terms of first-impressions…while it could have gone south with an ending that wouldn’t live up to this record’s beginning – the opposite happened…I instantly knew that Eon MC Etc. & Adduci would be bringing immense amounts of ingenuity to the mic and craft of hip-hop and ended this album with a serious highlight.  It was now the journey towards this immaculate finale I was interested in…you should be too; because for the record – no matter which order you put these songs in – this is completely solid hip-hop.

“Apocalypse” gets the party started quickly…words flying through the air at top-speed alongside an extremely creative and innovative beat backing these emcees up.  You can hear the difference in their personal styles – but also immediately hear how well they complement each other and really work well together on these bars.  The music of “Apocalypse” is honestly captivating and the added theatrical/dramatic nature of the sounds they’ve chosen to go with the vibrant bass-rhythm contrast and work together perfectly.  Great start for the two emcees with all the energy, enthusiasm and confidence you need to really make their hip-hop connect as it should…the mix of the pure joy of light-funk, old-school and its beautiful mix of sound make this opening cut instantly become a hit and perfectly accessible way into the Fighting Demons record.

When they creep & crawl into the minimalist beat that begins “Ghetto Birds,” you can hear the complexity in the winding lyricism and how they move and bend these words to their will around the inventive idea in the music.  They succeed in creating boldly captivating verses that flex intense skill; it’s largely up to them to deliver this one.  If anything I would have turned them up just a bit more as what we do hear in the music is very bright & repetitive in the mix and I think they’d get a bit more clarity to these messages, thoughts and perspectives by having the vocals above the music here.  That high-end melody is going to break through even at low-levels…I guarantee it.  As it stands now…it takes a bit more effort as a listener as a result to concentrate fully on each line as they come out – which…in my opinion potentially costs “Ghetto Birds” a bit.  When you listen to the lyrics and the astute social commentary that exists within them…you’ll want to hear every word on this one clearly.  You still can…don’t get me wrong – both Adduci and Eon MC Etc. deliver with the confidence you quickly get accustomed to them putting through the mic and I felt like through that swift & smart lyricism they still connected here…but yeah…just takes a little more focus on-part of the listening ears to separate the words from the music on this particular cut and its more sparse atmosphere in the music.  They do a great job of bringing melody into the music here through their tone in the verse and strong hooks that fuel the chorus.

You can tell the energy as a whole is about to change quickly through the menacing beginning to “Grindin’ In My Zone” – which basically verbally chastises the weak-ass emcees out there that shouldn’t be clutching the mic; a challenge of sorts to rise up to…or start packin’ up your gear to retire.  I’ll say this…I appreciate what they’ve done here more than it was my thing personally; “Grindin’ In My Zone” leans almost more towards a rap-vibe than any other track on this record built on a real solid hip-hop foundation.  Just a bit more straight-ahead if you will…and by that measure, there’s a great chance that this will be a track that will connect with more people out there than some of the most artistic comparisons…but I think over time, you’d find that “Grindin’ In My Zone” wouldn’t be the track that held up on Fighting Demons as the other tracks have much more creative ideas to offer.

Like for example…for these next two…all you other emcees out there…maybe it’s best you take a knee and have a listen rather than rush to grab the mic again…just sayin’ – because Eon & Adduci are about to put on a verbal display of exactly what it sounds like to really be right in the thick of the vibe and flow.  Absolutely stunning performances on the mic – the skills, pacing, metering…it’s all mapped-out flawlessly and delivered at the same high standard.  “Hands High” is about as smooth as pimp-silk in audio form and they follow it up with an seriously jammin’ vibe in “The Prayer” – both of these tracks have incredible highlight moments for what’s happening on the microphone and some of the best verses I’ve heard this year roll together like they puff, puff, pass wordage as well as they pass the greens to the next homie.  “Hands High” is absolutely as slick & sick as it gets…I thought the music was seriously creative and spaced-out perfectly for maximum-effect; the result is real room for these emcees to make their mark and they definitely do NOT disappoint.  With perfection in their vocal rhythm & flow, they transition from rhymes to hooks with focus, innovation and intense skill – LISTEN to the set of bars around a minute into “The Prayer” and the flawless delivery – you’ve GOTTA appreciate a performance like that…you just gotta.  In any event, between these two songs – I thought “Hands High” and “The Prayer” were two of the strongest tunes I’ve heard back-to-back on a record this year and really makes Fighting Demons flow strongly in its mid-section.

Following those two cuts would have been tough for any track and I think through the words themselves, this duo finds success on every beat and song on Fighting Demons.  “Lovely Game” suffers a bit through the issues of the verses massively outshining the chorus; I say a bit because this isn’t a formula that makes a song unlistenable by any measure – it’s just not what people typically expect.  I appreciate the low-key vibe to the chorus and hazy-feel it has to its vibe…but something about it also felt like it left me wanting something more that matched the intensity that they brought to the focus in the verse.  That being said…like I mentioned, “Lovely Game” does certainly find itself victorious through the bullet-proof verses they write…but it was probably closer here than most for feeling like I had an opinion one way or the other about this particular cut.  I don’t know what COULD have followed the killer-combo of “Hands High” & “The Prayer” and in that respect, I think “Lovely Game” holds its own about as well as any track could have.

“Lady Liberty” marks the decidedly artistic and more direct-perspectives on social commentary combined that grab the direction of the final two-tracks on this album.  A real highlight in terms of working with real creativity, openness and innovation – this track utilizes everything from opera-style singing hooks to smoother-than-smooth hip-hop, R&B-vibes and clever breakdowns that really bring new life to the last moments of Fighting Demons.  More than most…”Lady Liberty” MIGHT ask you to follow these two down the rabbit hole a bit further than before – but the adventure and resulting journey towards the end of this record is every bit as worth it as I’ve claimed from the very beginning.  Both emcees find that energy, enthusiasm and electricity to bring their best to this cut & over wildly inventive music & samples strung together, they’ve nothing but impressive on this cut.  This track really shows these two are thinking on an entirely different, experimental and creative plain than the rest; what you might trade in for a more traditional, straight-ahead idea or set of hooks here on “Lady Liberty” to me, is completely worth it to hear the bold ideas they want to try out come to life and standout like this.

Because where I first started by accident eventually ended up being exactly where I wanted to find myself at the end…listening to “Lonely Highway.”  As much as I might have listened…as much as I was impressed by pretty much everything I’ve heard throughout this entire album…”Lonely Highway” still had the most resonating atmosphere and unique approach that seemed to satisfy me more than any other cut on the record.  Slowing the rap down here…AMAZING effect…I’ll admit – one of the things I absolutely LOVE about these emcees is that both Adduci and Eon MC Etc. have the ability to rhyme extremely quickly with complex words and intense precision – BUT…the decision to slow the flow down here at the end resulted in a completely haunting experience that absolutely sticks with you.  Everything about this track seemed so incredibly well thought-out and the movement of “Lonely Highway” is much more-clever beyond any words I could write in support of it.  Massively strong impact at the end of this record with a song that really highlights their shared creativity and ability to successfully reach and grasp that next-level…”Lonely Highway” was brilliantly captivating with extraordinary ideas on display and one hell of a stunning way to conclude this record & truly unearth the roots of rhythm and poetry with style.

Find out more about United Statements at:  https://www.facebook.com/unitedstatements