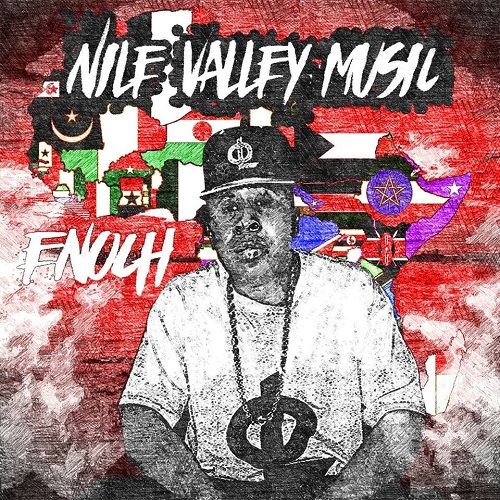 The jazzy beat in Enoch’s opening tune “Let Freedom Ring” and the powerful sentiment of the words combined make for one heck of a beginning to this five-song set.  With the rhymes set in a deep reverb sound, Enoch snaps together complex rhymes that are thought-provoking, intense in energy and rapped with a real point of view.  As the beat builds around him, Enoch keeps his flow on an even-keel and smooth throughout his performance; he rhymes quickly, but still allows you the time to absorb the importance of the words by keeping it all clear on the mic.  I think he does a solid job on this first track…dig how he gets the samples of Dr. Martin Luther King in there too.  Musically, “Let Freedom Ring” is seriously captivating in its wild-blend of sound…as good as Enoch does in his performance and sounds overall, he’s also got a beat here that’s pretty tough to outshine – the music sounds great and really moves well with the lyrics and grind of the man on the mic.

“Deuteronomy” showcases the lyricism aspect of Enoch even further…he’s put together another solid-set of words that reflect the struggle of culture in society…and again, he’s smart enough to put himself right into the narrative and really express a point of view.  In a sense, any artist that does this is always taking a chance of limiting the audience to their own expressed viewpoints…but in my opinion the dedication of the fans that support you are worth any trade you might make for a few falling off or never fully climbing onto your bandwagon, know what I mean?  “Deuteronomy” highlights the amount of thought that Enoch puts into the words he writes, and he comes out with respectable results here on this second track.  That being said…he’s gotta be a little careful on the sound of the flow and making sure that he keeps that as diverse as the lyrics and music; a lot of the approach in his tone and roll through this rhyme is very reminiscent of what you hear in the way he rhymes through “Let Freedom Ring.”  You can certainly hear the difference in the music and style of the songs overall…but with much of the same energy in his performance, effects on the vocals, metering to the beat, amount of words in a line/verse, it ends up sounding very similar…just something to be mindful of.  Like for instance, I really liked the final minute of “Deuteronomy” where Enoch finally breaks free of the rhyme-scheme and flow and just starts busting out randomly to the music instead – THAT to me, sounds like an emcee feelin’ the vibe and right in the moment…and it was a different side of Enoch I felt like I wanted to hear more of.

Besides…you’ll hear more personality from Enoch come alive on the playful beat of “Powernomics.”  Giving a little bit more space to the words pays off here and keeps the sound of the record more versatile.  Lyrically…perhaps a bit more controversial than some of the others; I’d be the last to say I’m familiar with the daily struggles of Enoch…but yeah, I definitely found some of the points he made I agreed with readily – others absolutely not.  Of course…it’s also hard to say which side of the fence that Enoch is on throughout this entire track…he’s a man of the people as he’s demonstrated through the first two tracks on this EP…and though gettin’ money is a reality in everyone’s daily grind – it’s not usually the focus when you’re thinking of how to bring the people together.  All in all, Enoch’s goal is to make people think…I had to crack a smile at the fact that he’s making me think more in this track when the music has a much more playful vibe than the others do.  Again…I think he’s taking some chances here lyrically…there’s no doubt there will be many that relate to a lot, if not all of what he’s saying – but there are also bound to be a few eyebrows raised by the end of the first verse that will definitely challenge the mindset and beliefs of many out there as well.  I found that lyrically, this track has just as much potential to be divisive as it might bring people together…which kind of muddles the message that Enoch’s trying to send, in my opinion.

A track like “Together We Rise” better represents that message, again, in my opinion.  Enoch’s got a great set of hooks to this rhythm, hypnotically working magic in the verse and bringing extra-punch and energy to the chorus.  I think that the way that Enoch’s vocals have been recorded throughout this record give the songs a distinct ‘live’ sound…and in some ways it works, in others there’s a bit of trouble mix-wise as it tries to blend in naturally with the music, but struggles to.  As I’ve said many times – it’s the ideas that truly count – and Enoch’s got a great one here with the charismatic grip he’s got on the microphone on “Together We Rise.”  Detailing the extremities of black-culture and the hardships/oppression that it has faced throughout history and continues to even to this very day – lyrically I think he’s nailed it here.  It’s got passion, emotion and thought behind it – and most importantly, “Together We Rise” is a solid reminder that the power truly lies with the people…and that we get to that next-level, together as one.

Final-cut “Stressed” adds to the tension of the record’s themes heavily in its final moments as Enoch relates the impact of being a socially-conscious individual.  It’s not always easy being the people that see through the set-up of society and its flaws…and “Stressed” articulates strongly what it’s like to be truly aware of how much the odds are stacked against the everyday-person.  Even though the track comes out a little bit slower & softer in volume overall, I felt like the mix was a bit more towards where Enoch wants to get this to be.  “Stressed” took the ending in a different direction than I thought he’d go in the end…I thought he’d look to leave us on a more uplifting & inspiring note rather than remind us about how tough the world can be…but that was my own assumption in how this guy might play it all out.  At the end of the day, Enoch walks to his own rhythm & beat…not to be contained in any box of expectations…and you gotta respect that.  Great to hear music with real, honest opinions and a defined point of view like this…I’ve always believed that music with something to say deserves an ear to hear it.