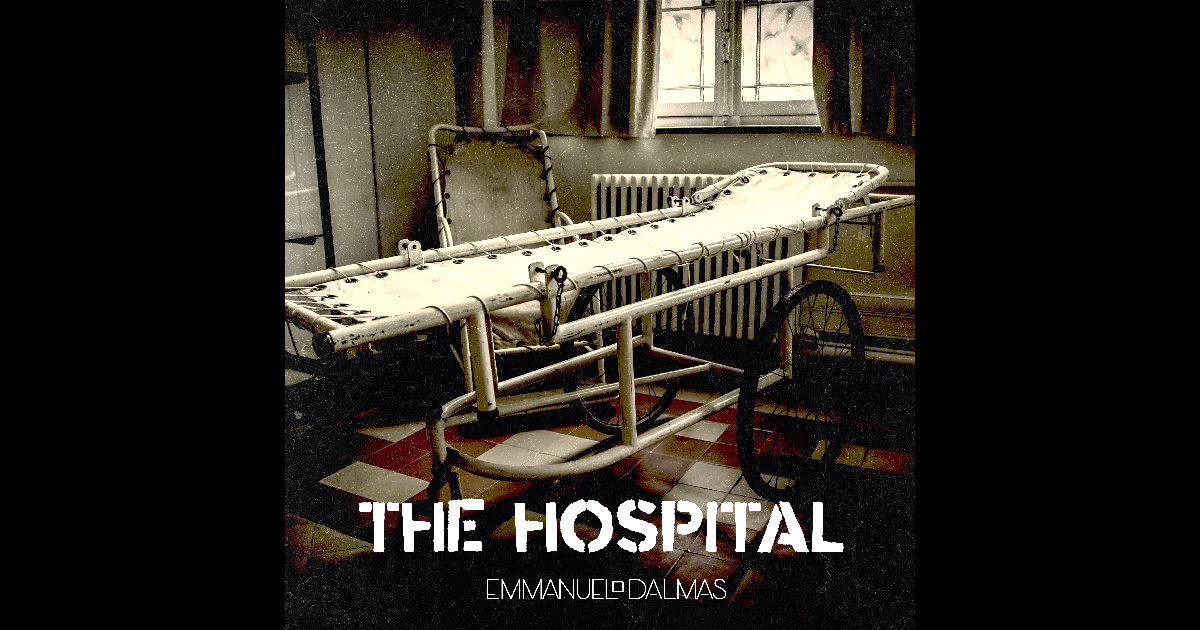 The perennial man of music returns!

As many of you regular readers know, one of my not-so-secret joys in life is discovering a new set of Emmanuel Dalmas tunes on my playlist.  I mean it!  I ain’t lyin’ to ya!  There really aren’t that many artists like him out there that continually exercise the freedom of creativity like this guy does – and it’s precisely because of that, that every time we get a new batch of songs from this talented dude, I never know what it is he’ll have in-store for us next.  To say the least, I’ve heard everything from colorfully bright Electro-Pop music to brilliant Classical sounds with traditional instrumentation, and all the way back around again when it comes to Emmanuel’s music – all the while happily listening I might add.  The joy he takes in the genuine wonder of making music is literally equal to the joy I take in the surprise of listening…he never really knows where his creativity will take him next & neither do I – and I love that.

Don’t mistake that for not being prepared…that’s a totally different story, suited for a completely different artist or band out there, but not applicable to Dalmas.  While his own imagination might keep him guessing as to which inspiration will catch his attention next, when it comes time to push record with these ideas he has, he’s more than ready to go and has a practiced plan that leads to victory.  Like, listen to his new single “Life Is A Journey” for example – it’s about as well mapped-out of an idea/song as can be done…it’s the story of LIFE ITSELF…from the very beginning to the end.  We might navigate these timelines of our lives with no real clue of what comes next – but Dalmas proves to be confident & in control throughout every stage of the evolution of this song as it expands, contracts, blooms, & blossoms, in a sincere effort to tell the whole story from an instrumental perspective.  No small task by any stretch and a highly ambitious idea to even take on to begin with – I’m amazed by the results here; I think Dalmas has really discovered a song that strongly represents his concept completely.  I’ll fully admit that, with instrumentals, sometimes you do need a bit of guidance towards what a song might be about from the creator’s perspective…we always know how it makes us feel individually inside, but to get to what the intentions & meanings were originally in an instrumental tune can take a bit of help.  And more often than not, if you get an explanation at all, it’s usually just via a hint in the title – which you’ll certainly see exists now in “Life Is A Journey” – but Emmanuel’s also played this one smart by offering up more to the idea in words online with the posting…and that really helps in tying it all together.  The kind of effect where, once you read what he has to say, you literally hear the sounds that come along with it, and think to yourself, ‘yep – that IS exactly what this all sounds like’ – and you gotta give the man serious credit for being able to pull something this ambitious and outright monumental off.  “Life Is A Journey” is as advertised – and it’s seven plus-minutes long to boot – you get to spend a magnificent amount of time with this orchestrally-inclined instrumental and enjoy the various stages of the life-experience through music and the perspective of Emmanuel Dalmas.  Extremely well played & well thought out…hearing this song evolve to what it becomes…all the breakdowns, the spacing, the rising & falling…it’s truly brilliant in just about every way I can think of and a fantastic use of seven minutes.  Engaging, beautiful, bold, contemplative, thought-provoking, emotionally-evocative…just like LIFE is, wouldn’t you say?  Dalmas always finds one way to exceed my expectations somehow, and I’d argue he’s certainly done it again with the scope, size, and skill you’ll find in “Life Is A Journey.”  Plus those EPIC drum sounds towards the end are worth the price of admission alone…they sound fantastic in the mix…genuinely like subdued thunder – just enough to confuse my dog beside me here, but not scare her…and I appreciate that – so does she I’d imagine.  So thanks Emmanuel!  For real – great tune.

“The Hospital” – man this takes me back!  My own old man’s a piano-player/keyboardist…I used to wake up to creepy tunes like this all the time first thing in the morning or try to fall asleep with them happening in the house as he played late at night…he’s got a…hmmm…strange sense of humor…and parenting I suppose lol.  In any event, darker & more twisted tunes like this can quite often be right up my alley…and the vast majority of this one is by far…I think there’s maybe like, one or two notes along the way that I’d question or a couple double-hits on keys that may/may-not be on-purpose, hard to say.  Usually when it comes to Emmanuel’s music & material, I’m not one to question his intentions…I’d imagine that, even with him still being fairly new upon his musical-journey, you can tell by the quality of his ideas, production, and performances that it’d be most likely that each note we hear has a purpose.  Overall though, if we’re talking straight-up atmosphere & vibes, “The Hospital” really can’t be beat – Dalmas went for creepin’ ya out here, and he succeeds big time – the sound of this song will haunt your ears long, long after it stops playing.  I love the…hmmm…I’m assuming they’re strings of some kind…the high-frequency stuff in the air behind the piano…it’s brilliant; and as far as the piano itself is concerned, I absolutely freakin’ dig the frightening melody Emmanuel’s stumbled into here…beautiful, fascinating, scary, and stunning…it’s marvelously malevolent.  Clever use of the hospital breathing-machines & beeps & whatnot running through the background as well…it’s eerie enough when they’re present, it’s almost even spookier when they pause for a moment or two or fade away behind the music in the mix.  Definitely the kind of bold instrumental & mischievous sound that keeps people up at night with the lights turned on…and considering that’s what Dalmas was going for here – mission fully accomplished.

And so then…naturally, we end up going to a song written to be a children’s lullaby…because…well…because Emmanuel Dalmas?  I don’t know that there could be another valid reason…it’s just him, this is who he is.  Would anyone else think twice about sending a horror inspired song with a children’s tune right afterwards?  Yep.  You bet they would.  No one out there would do this – but no one else out there is Emmanuel, that’s absolutely part of what makes him such a special find out there in the music-scene to begin with.  What I really love about “Happy Baby” is the fact that I’d honestly listen to it myself…thankfully, I didn’t feel like this was a song that you had to have kids to feel like you’d connect to it – at the end of the day, it’s quite an exquisite & ageless melody…perhaps he’s using more crib-like or mobile-esque sounds to form that melody, but it’s still a gorgeous one that we can all connect to, no matter how old we are.  Anyhow…the real story behind this song from what I gather, is that somewhere in the spare five-minutes Emmanuel Dalmas must have found himself in one day, he decided that a whole five-minutes of free-time was clearly waaaaaaaaaaaaaay too long and he needed to fill that space in his days with a new project – again, because Emmanuel Dalmas, that’s it, that’s all.  So he’s creating a new YouTube channel, because of course!  I’m with Emmanuel – down with free-time I say!  More art!  More music!  For real though – anyone else out there might put their feet up on the couch and call it a day…but not this guy.  AND – he IS a family man…so you know for a fact that the intentions/ambitions of a track like this are pure ones – he’s looking to create music that isn’t so…isn’t soooooo…let’s just say isn’t so “Baby Shark,” where a parent might actually enjoy themselves and not think about stabbing their stereo systems when having to repeat certain songs all day long upon request.  What I don’t think people will expect is just what a truly unique melody they’ll find on “Happy Baby” and how heartfelt, sincere, and exceptional it really is.  When you hear the opening ten-seconds, it’ll see like it’s going to be a straight-ahead, easy-to-absorb melody and song at first – but you’ll hear how much depth is involved immediately by the way the song shifts into such an anti-typical melody to form the majority of “Happy Baby” to follow.  The best way I can put it, is that Emmanuel’s working with more mature notes & tones than I’d imagine are directly appealing to a child…if I was to venture a guess here, I’d imagine the parents being more amused & engaged by “Happy Baby” than the happy baby in question might be – you feel me?  So maybe, just maybe…Dalmas might be catering more to one side of the situation here in this children’s tune that adults can enjoy…he might be looking to create his own solution to the monotony of what we typically associate with the genre and finding his own way out of it…or at least trying to.  As to whether or not he’s going to get away with substituting “Happy Baby” for the latest Disney sing-along songs or whatever the heck the kids are listening to at that age these days…that might be another story.  Safe to say that as soon as those eyes start to droop though, parents will be looking forward to make a quick switch on their playlist to something like “Happy Baby” that’ll keep the kids content and sleeping soundly, but also give the ol’ mom & dad a soul-soothing sound to enjoy and a beautiful mental reprieve from the many horrendous songs they’re so often exposed to throughout the many joys of parenting.