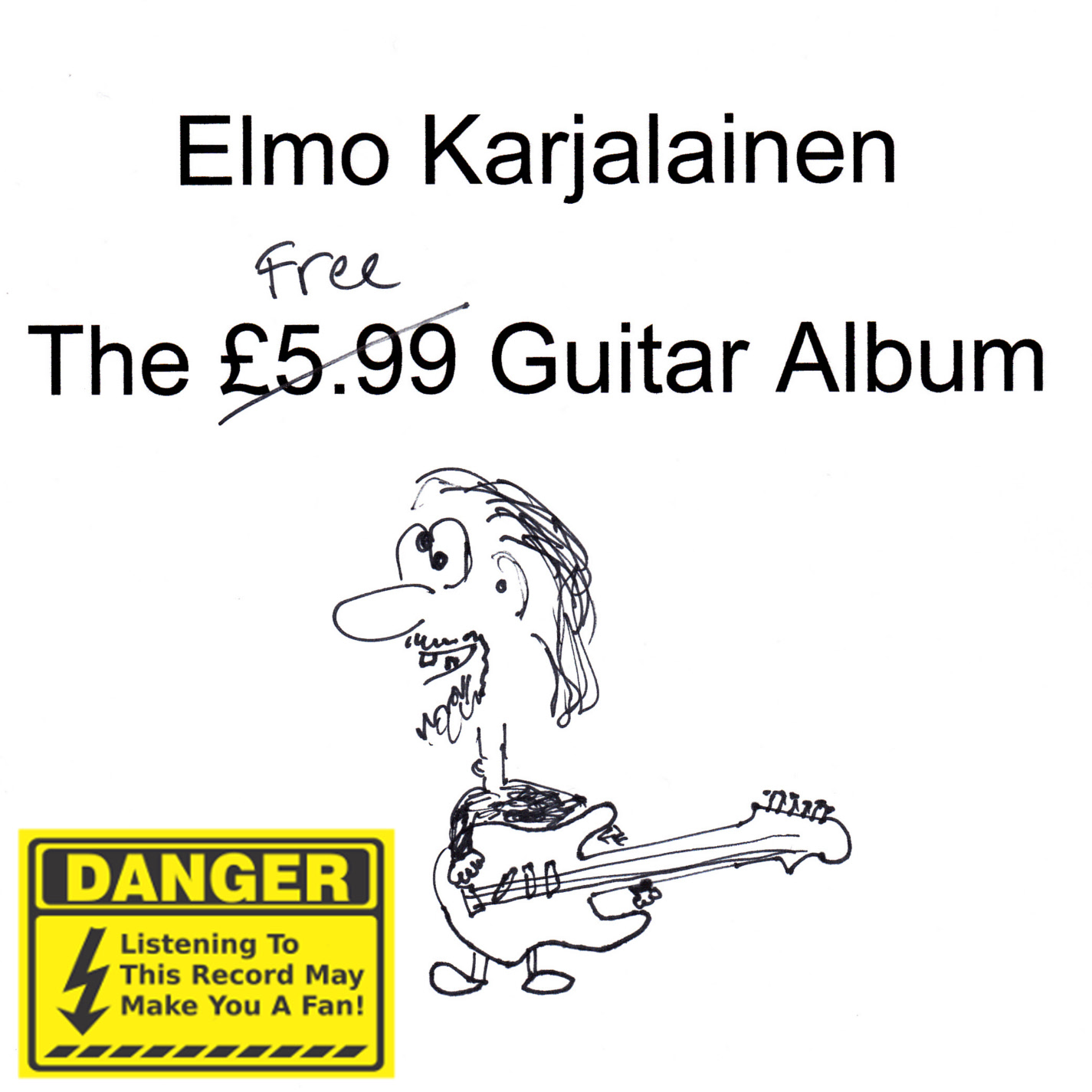 The album starts out HOT! Elmo Karjalainen comes out absolutely crushing the guitar licks on the opening of The Free Guitar Album with “Instrumetal.” Intense and mind-blowingly well-played – Elmo starts off this album with a masterpiece guitar epic that tears the place up from left to right. There is no way you can follow a song like this with anything disappointing to follow…my years of experience have taught me that you can’t get it this RIGHT like Elmo does on “Instrumetal” and come anywhere close to writing something so horrendous we’d turn it off after setting a precision-standard of gold-star excellence like he does on this first rock song on The Free Guitar Album. And even though these guitar-stars tend to often program the drums in their songs…the ones that do it well do it VERY well…and I love what Elmo has put into this opening tune.

Between the sounds of “Instrumetal” and the following-cut “Don’t Quit Yer Day Job” really reminded me of a certain guitar hero of my own; actually many of them would. And sure…some people will tell you there’s no difference between a Vai or a Satriani…to me there always has been. If this doesn’t remind you of Steve Vai’s skill and song-writing style, particularly around the Sex & Religion and maybe earlier like Alien Love Secrets type-Vai…that’s what I hear in the hard-cutting edge in the music of Elmo. BUT…dear readers…the reason why I’m suggesting it would be Vai as an influence would be because of his relationship with Zappa…and the amount of sheer ATTITUDE you could hear in the music they played; and you can hear that in Karjalainen’s playing – this is a man that can really make the guitar speak to you and convey all the passion, emotion & all-things-ROCK in his music.

Of course to be mentioned in the same breath as any of these references truly speaks to the level of skill, power & precision of Karjalainen’s work. It’s extremely well-deserved – this man has clearly put his life into learning his craft and every second of it shows on this recording. After another Vai-esque break in the music through “Clark-san” informing us that we’d be listening to an instrumental track coming up, we launch into the sonic-stratosphere once again with the push/pull of “Incontinental Breakfast.”

You know something? I love instrumental songs simply for the fact that someone out there has to at LEAST put some words in as a title. “Incontinental Breakfast?” I mean…c’mon! If that’s not an indication of a man who’s spent some time in the Zappa catalogue I just don’t know what is…definitely an nod to some humour if you were to ask me! The beginning of this cut comes out so smooth that you literally have no idea how hard it’ll get – it comes out of nowhere. And so I’m sitting here, laughing out loud & loving the music, thinking to myself – ‘how bad could this breakfast have possibly been?’ as the music transforms into creative-chaos controlled perfectly by Elmo. Well done sir…you’ve certainly got me smiling…and man is this album stockpiled with an audible respect for the genre or what? Awesome.

The gorgeously dark & beautiful melody of “She Sleeps On The Moon” is like Elmo’s own rock-ballad opus akin to “For The Love Of God” from Vai’s Passion And Warfare. Excellent solo-work on a constant basis – ‘Mo’s a real pro there’s no doubt about that whatsoever this far into the album and my instincts of excellence to follow moment one on this album have proven true as every second reveals itself. I mean…listen to him SHRED apart “Algorhythm!” This guy’s axe could slay an axe-murderer; I’d bet on Elmo every time. Right around the three-minute mark of both “She Sleeps On The Moon” and “Algorhythm” hold some of the best moments on this album…the solo that starts up about three-and-a-half into “She Sleeps On The Moon” is just deadly awesome. The punishing stop/start drumbeat of “Algorhythm” would damn near take a mathematician just to play guitar to it…yet here again we find Elmo unrelenting, confident and completely triumphant.

And yeah…okay…I know “Noises” isn’t supposed to be a standout so much as a quick break in the madness…but I loved it. Less than forty-seconds of subtle sounds burbling in the background distance…it serves its purpose like the snack between meals.

Hahaha…alright…so…get this…I gotta interrupt this whole thing for a moment with a quick fun-fact about Elmo cause I just looked up his social media to see where he’s coming to us from. Turns out…he’s from Finland…but the best thing I read about Elmo? Apparently the man himself is ‘almost totally unlike David Hasselhof’ – what can I say other than I knew there were at least trace-elements of The Hof in him. There are at least trace-elements and particles of The Hof in us all, isn’t there?

“The Gentle Art Of Listening” sees Elmo back to the serious-side on this slow-burning beauty. This song has such an excellent churn and grind to it…it’s nearly a droning-effect on the listener…but like the title suggests, this tune pulls you in closely and just as you might expect it would churn away forever, Elmo switches it up on you once again. Blasting off into incredible solos that command attention…this guy should absolutely be playing the same massive stages as the true rock-virtuosos of our time. His touch on the strings is so insanely authentic…listen to his work from the fourth-minute on forward during “The Gentle Art Of Listening” and hear how this guy lets the notes buzz in and out, or ring through clearly; his instincts never let him down – Elmo makes completely captivating instrumental rock.

The light & airy ending of “The Gentle Art Of Listening” makes way for the low-end heavy groove and onslaught to come in “The Bolero Unravels (I Come Undone)” which sounds like a complete war between countries raised and finished within this one song – or at the very least one epic game of Risk. It sounds like the march of doom…or like whatever is in Elmo’s way should seriously consider getting OUT of it… Really huge sounds on this song and when you realize you’re nearly at the end of The Free Guitar Album it’s almost like walking out of the dark movie-theater into midday sunshine…you get that ‘what just happened and where am I’ feeling when coming out of “The Bolero Unravels (I Come Undone).”

And yet…somehow it’s like Elmo Karjalainen knew that this is exactly how I’d feel, and in his gentle wisdom provided us with a hazy, dreamlike final song with “Relax.” Nice right? Seriously…this final cut displays just as much mastery as the up-tempo rock songs do if not even more so…Elmo has nowhere to hide in this final song and you can hear every perfect note with crystal clarity and its incredible way revealing genuine emotion through its melody.

What else can be said? From start to finish…this is one jaw-dropper of an album and full of astounding highlight moments in musicianship. If you like to hear real skill and the perfect love of the musical craft on full display…and you dig on instrumental-rock…do yourself a huge favour and go pick up The Free Guitar Album – you need this one.

Find out more about Elmo Karjalainen & grab some songs from his official page at: http://elmojk.com/