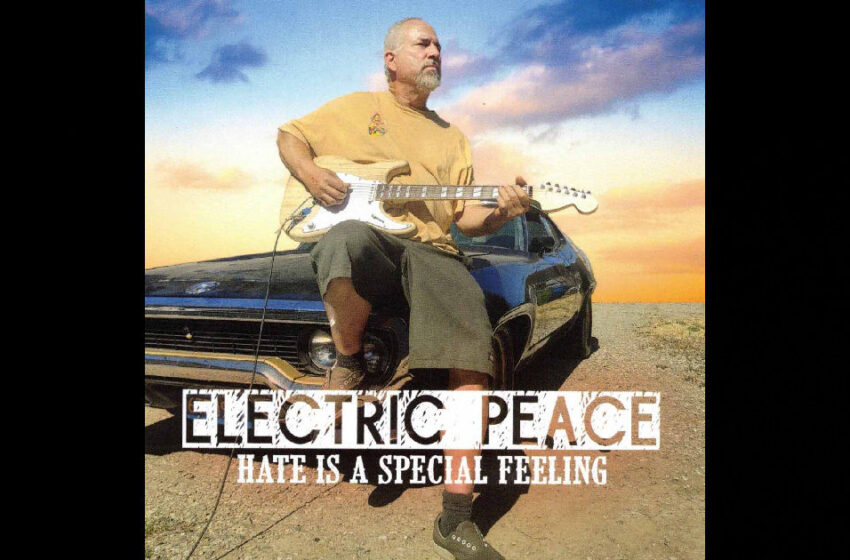 I ain’t gonna lie to ya folks, as an audiophile, Electric Peace had me right on the edge of my seat from the very second this track started up.  Spectacularly gritty, a tinge of psychedelic sound, and a garage Rock vibe that pretty much can’t be beat – I exist & get out of freakin’ bed for discoveries like this one here.  “Hate Is A Special Feeling” is just about as awesome as an introduction into an artist’s or band’s music could theoretically ever be – if you wanna hear what a fantastic gateway into listening sounds like, you need look no further – these guys from Reseda, California, put on an audible clinic with this single.

Perhaps the best way I can put it, is that even after having written thousands of reviews online – it’s songs exactly like this one here that remind me why it is I have no problem at all sloggin’ through a whole bunch of stuff to mine out a rare gem like “Hate Is A Special Feeling” – this is the kind of cut that makes the moment feel every bit as brand-new, special, and incredible as the day I first started typing.  Electric Peace makes it EASY on a guy like me – you hear a track like “Hate Is A Special Feeling” and the fingers just start doin’ what they do…in between the occasional dance freakout session or two happening along the way.  What’s not to love here?  What’s not worth turning right up to the freakin’ rafters?  Electric Peace has kicked all the ass that could be kicked in the way they’ve played this tune.

It’s savage, it’s deadly, it’s filled with seething & sarcastic Punk attitude, yet produces this whole like…I mean…good lord – how do you even begin to describe these guys for real?  It’s like Strawberry Alarm Clock went and decided to resurrect itself somehow, grabbed the players from The 13th Floor Elevators and the Black Keys, and just started rocking TF out until the juice in the neighborhood was fully drained!  There’s just seriously nothing here that doesn’t completely connect 100% – the musicianship is entirely outstanding, the vocals are gnarly when it’s called for in the verses, and then embrace that more all-encompassing, layered sound to bring out the color in the melody & hooks of the addictive chorus.  The whole damn thing is addictive!  That low-low voice six-feet underneath the surface for instance, is pure genius…and likely to fly by most without a close-up listen to the multiple factors creating such a riotously engaging single…this kind of detail, is straight up amazing, especially in anything you’d consider to be found within the Garage Rock realm.  Maybe little Junkhouse in the verses…though that’s a pretty meta Canadian reference for a US-based band…but similar levels of supreme cool in the sound for sure – and then you’ve got this whole pysch-aspect of the sound & gripping instrumentation like you find in the music of The Black Angels as well…I mean, shit – Electric Peace is keeping company with some seriously stellar names that continually live on my playlists over here in comparison.  Lyrically, these guys are freakin’ badass…from what I understand this whole project centers around the musical mind of Brian Kild, so kudos bro – there ain’t a damn thing that I don’t like or love about “Hate Is A Special Feeling.”

I mean, listen to that guitar solo will ya?  Price of admission right there, as if they haven’t already given you a massive list of reasons to dig on this cut already.  Brilliant verses and sung perfectly, stellar synth vibes in the background, bass & drums on-point…hooks that are essentially bulletproof and a release of pure energy that is bound to catch everyone’s attention – Electric Peace goes all-in with “Hate Is A Special Feeling,” commits to the wild nature of this ambitious & zany idea, and executes with undeniable professionalism.  Hellz yeah it’s Garage Rock, sure – but that doesn’t at all imply it’s being made by a bunch of rookies in a basement out in the desert somewhere – this crew knows exactly what they’re doing, and it shows in the results when you listen to how they rip their way through this exciting blasting of vibrant Psych-infused sound.  I’m all about it in every way – I don’t think you could have asked a thing more of the band in the way they’ve played it, the way it’s been written, the way it’s come out in the mix & final production – Electric Peace knows exactly what they’re doing if you ask me, and it sounds fucking awesome.

Find out more about Electric Peace from their official homepage at:  https://www.electricpeace.band