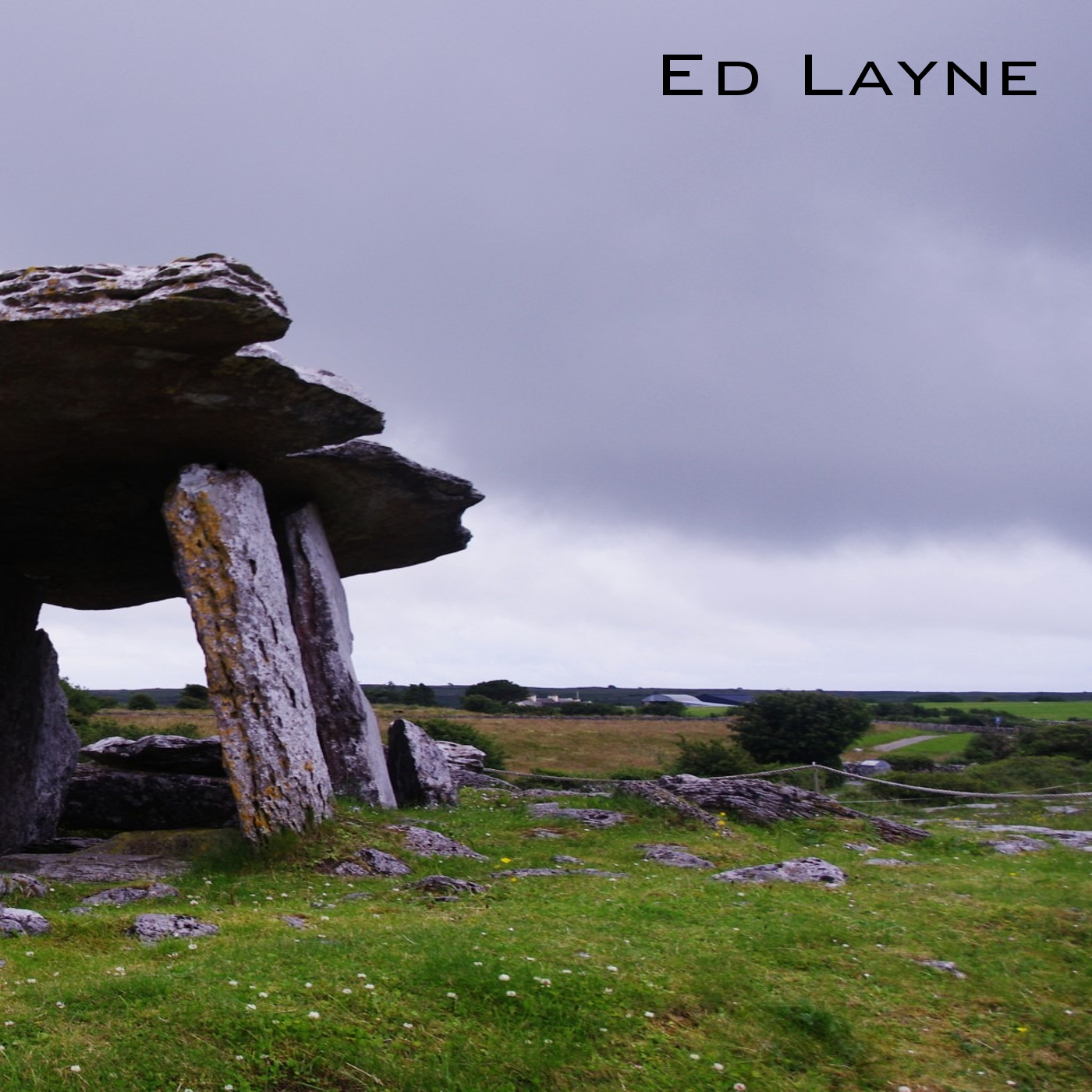 Well! I’m glad good ol’ Ed and I are on the same page!

I can definitely hear the impact that some of the listed influences on Ed’s page have made. Immediately opening this new album is “Vicious Circle;” a rocking-cut with a classic heartbeat to it all. Echoing tones and styles of classic-rock heroes like The Who, Rush and Yes – what’s different about Ed Layne is that there is no band here…there is no one else to turn to for a break or a fill in the song…it’s ONLY Ed.

And although you can tell quite quickly that his passion lies with the guitar, he’s clearly well-skilled and talented for all-things-music to make material come alive like this. Definitely, 100% feeling that psych/rock combo that made The Who spectacular jump started through “Vicious Circle” – it’s all throwback sound, but man is it ever REAL and WELCOME in the right here and now. Loving the drum combinations and writing overall on this first sonic journey from Ed and you can absolutely tell right away from this opening tune that we’re all set for a wild & fantastic journey into rock.

Vocally as well, I thought the opening tune came out incredibly strong. As the album moved into the serene beginnings of “Step Away,” the rock is soon to follow. Listening to this, you get that progressive-rock style of writing that once again kind of has this way of taking you right back to the roots of it all and imagining the time when this music indisputably ruled the earth. Though I wasn’t as much of a fan of Layne’s vocals in this second track, I think that speaks more to a very challenging part to sing than it does me not digging his sound; he’s a good singer – but I’d say had already come out gunning in that opener and to nail the vocals in “Step Away” would have been one tough bitch.

Something like “Sea Is Raging,” to me is a version of Ed that is more ‘in-the-pocket’ as they say. His vocals come out great here, the drums come out spectacularly and overall the flow, the stop/start of the beat…it’s all working to his favour here on what sounds like a song that would make for an unbelievable live experience. It’s also a song like this that makes you realize that what Ed is doing might appeal to those that long for classic rock, yes – but in this track you can also hear how close something like this is to what Minus The Bear is making in today’s music, or even some of the less-alternative stuff that Josh Homme has been putting together. Bottom line being – there’s an audience for Ed’s style & sound that thrives solidly today, both young and old have a way into his music.

“Requiem,” I’d dare say takes you into old-school Genesis territory. Though I don’t see any of those guys listed in his influences…I mean…c’mon right? This could fit in with the classics of the Gabriel-era of Genesis. I grew up on that stuff…so even though I can still hear The Who hiding in the background on this song as well…I’m calling a more Genesis sound here on this one. And anyone that doesn’t buy my theory can challenge me to an arm-wrestling match, best two out of three. I do not know why that is… In any event – I love the writing on a track like this, and again to consider that Ed is putting all this together on his own…this is highly commendable stuff.

Even the picture that comes up on his Soundcloud page looks 110% badass. I don’t know what it is exactly…he’s got himself strapped in with a double-neck guitar and he just looks…happy…but with a hint of the real mischief of rock. That surprise element that happens sometimes when the amplifiers come on and you REALLY get your expectations blown away. Something about Ed tells me he’s that guy. And as “Maple Street” starts through its hard-charging riff…I think there’s a very large possibility Ed IS that guy you never see coming until you can no longer escape him; but when he makes music like this I think it’s going to be a much more willing audience than a captive one. The solos in the final minute or so of “Maple Street” are one of the best highlights on the album – start to finish, this song kicks all the ass and declares itself the sheriff of your quaint little town.

“So Good.” Indeed, ‘tis! Love this tune and in the midst of Ed Layne, this guy is on a supreme roll with some truly dynamic material that has unique melody and music all the way through. Oddly enough, even though there’s a massive distance in between the overall sound of a band like Jane’s Addiction and what Ed is doing here on the album, somewhere in the midst of “So Good” I was finding a parallel there. I think it’s partially the vocals, partially the guitar…partially the ‘bigness’ of these songs and the journey that they really take you on. The atmosphere is completely owned by this one confident musician – Ed Layne approaches this material fearlessly and as a result has really found himself creating a record with passion and true merit.

Hmmm! Born and raised in the USA! I would venture that there are a few songs that would make you question that…particularly with “Center Of Attention.” It just has that classic…I dunno what it even is – is it a UK accent to the vocals? I don’t think he’s faking citizenship so much as I do think he’s singing with a real respect for the style and sound he’s going for. The music is innovative and truly reaches out for the unique melodies that it possesses with abundance like fruit on the vine; that’s the thing about progressive-rock – there are so many parts that depending on where you want to place the vocals each song can possess a ton of melodies within itself. “Keep On Rolling,” is an uplifting tune that contains numerous melodies and incredible parts within the music; it’s not just a great example of what I’m talking about, it’s a flat-out great song.

Has anyone else in here noticed that we’ve gone through about ¾ of the album already and Ed basically doesn’t seem to ever make a mistake?

Yeah, well, that’s not going to stop being the case anytime soon. “Five Days From Home” becomes a stand-out performance in every category at some point – the bass is immaculate here with a great roll up the scales and the guitar to follow is unbelievable, crunchy and so damn well-played & written it just brings a smile to your face. This is the unassuming track on the album for sure…nestled all the way back there at number nine, he starts this one out in a subtle emotional sound before just exploding into rock. And where is it…somewhere around the 3:30 mark I believe? That’s when this guy lets loose the Led Zeppelin side of himself and Ed Layne brings an energetic switch to the music. Absolutely epic this song is…the more I listened to the album, the more this became a song I couldn’t do without.

“River’s End” also gives me a massive music-boner. LOVE IT. The riff in this one is amped-up beyond belief and just comes out rolling so supremely. Guitars completely stand out here in one of their best performances, which is saying a lot on this virtuoso’s album! Vocal-wise, I think as much as I love this song, Ed also has to be careful about coming out too similar in sound and tone in his music; he’s demonstrated the ability to shake things up with the guitar, bass and drums…I think that last breakthrough for him is to combine a little more innovation in his vocals and this guy becomes the complete force to be reckoned with. As it stands now, he more than fits his style, music and sound overall…but, well, yeah…someone out there gets what I mean right? He’s not doing anything wrong at all, I’m just looking for a little more diversity in that one department overall; but that could very well be just me.

I cannot deny just how much I love this final song “Monarch Hill,” nor would I want to. This is the kind of music I first fell in love with right here…the first kind that was able to take me to another place when I closed my eyes and spoke to me without words. Many of the classic albums from Jethro Tull that I’d pull from my dad’s collection all had instrumentals, gorgeous and beautiful just like “Monarch Hill” is. Full of pure acoustic-beauty…this is one hell of a way to end the album and experience of listening to Ed Layne – this is a breathtaking last song. It provides such a departure yet logically-cohesive ending to Ed Layne that just makes so much sense if you’re familiar with the prog-rock giants and their music. There’s such a tremendous respect for the style, tone, sound, recording and atmosphere all throughout this album that it becomes enchanting, charming and completely captivating…and created to be turned UP! Ed Layne has done a phenomenal job on this album – on his OWN – and really deserves all the credit in the world for making one killer experience and musical-journey to listen to from front to back.