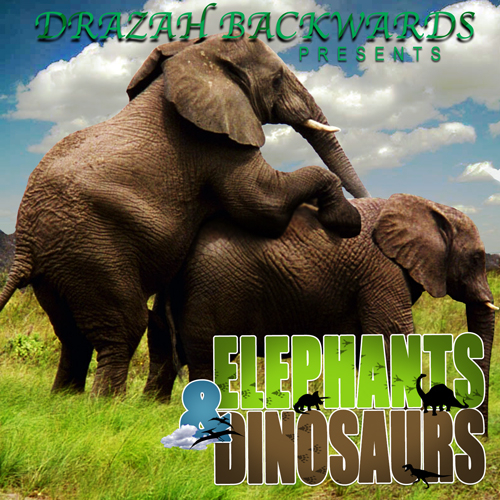 If you’ve been following our written work, you’ll see that we’ve only just begun our foray into the mix-tape world. In fact – it’s only been a short while that we’ve known about the artist behind today’s review – Drazah Backwards – from when we were lucky enough to have an interview with him earlier this year. As it turned out through that interview, not only is Drazah an incredibly vibrant and easy going personality but an incredibly hard worker.

The evidence of these claims can be seen throughout the interview (You can view it here) – but the true evidence can be heard all over his latest mix-tape album – Elephants & Dinosaurs.
You can find the sound of this mix-tape to be much like the referenced title mammals: BIG. And just like we found the man behind the music to be through the interview – this album is nothing but non-stop good times. No matter the subject – the beats behind the lyrics on this album will constantly have you in a good mood. As far as I’m concerned – hell YES I’m a in a great mood right now – doing my morning thing listening to my man Drazah Backwards do what he was clearly meant to do.

Now throughout the existence of the mix-tape – this style of collaboration has always taken the comments of it “not being real music” from musicians who have spent years of their life dedicated to their one and only instrument. That bullshit argument is tired, weak and overplayed – one that we completely cut off at the knees by realizing that this musical world is nothing but a combination of ART & MUSIC – and that can shine through in many, many forms.

So whatever – he doesn’t “plug-in” to an amp. What he is doing – track after track, is creating an art form and honing his craft. From my experience with mix-tapes, I’m learning that what separates the good from the bad is the musical ear of the artist putting it all together. Either they understand music, and put together these incredibly smooth mix-tapes that flow with ease (Just like Drazah has here on Elephants & Dinosaurs) or they don’t and you can hear the roughness in the cuts and editing and the jarring of samples that truly don’t go together.

From the moment you press play and open with the track “Anti-Lock Brakes” – you can hear the skills and the sheer amount of work that it would take to put in to get an overall quality with this high of a standard. Before halfway through the album you’ll have a number of confirmations to follow, with tracks like “Radio (Feat. Urban Champ)” and “What I Look Like” confirming that, yes, there are also some SICK skills being spit into the mic to go with these killer assembled beats.

I think what I like best about the whole mix-tape genre and ideal is that it truly plays to an artist’s strengths. Let’s face it – if you’re creating one – hopefully it’s always in the back of your mind that the beat you’re creating is one that you KNOW you can work with. Drazah Backwards has proven over this entire album that not only is he completely capable of creating an entire album’s worth of creative and dynamic beats – but that he chose to challenge himself and keep it diverse. You won’t find the find same tired flow echoing over every track – nah son – Drazah is completely unafraid to take on all kinds of sounds and rhymes, something you can hear instantly in that progression past the halfway mark with tracks like “Get In That Frame Of Mind,” “Respect My Arrogance” and “Field Trip To Mercury (Feat. Illdot Logic).” These three tracks back-to-back-to-back are incredible together and make for a mid-point in the album that is captivating, rather than dragging or repeating as it can be on many albums of any genre.

“Been ready for this since I was five-foot-nothing” – and truly it sounds like he has been. On this track “5 Nuthin” he rhymes about something that’s crucial and important to ALL of you independent artists out there: It doesn’t matter WHEN you burst out onto the scene – if you LOVE what you do then you’ll be prepared for that day; and it WILL come.

Oh shit! Was that a sample of “Careless Whisper” by Wham? YEP. On the track “I Know You’re Not” Drazah reaches back into the 80’s to rhyme over a beat by this former George Michael super-group. The saxophone line is literally one of the most iconic sax lines ever laid down and certainly recognizable to ANYONE who listens, regardless of the age. We’ve all heard that song; now hear it the way that Drazah hears it and realize again, the real mastery of the mix-tape is to know how and where you fit into the careful selections of samples you cut – there’s no doubt that Drazah knows his every well-planned move.

As he closes out the album and rips some sick rhymes over “Horatio” and creates one of the most unique beats on the album on “Jumanji” – he saves one of the sickest of all to close out the album on a “must-repeat” note with the track “Lambo Dreams.” This track serves as a reminder that Drazah Backwards is not only here for one album – he’s got goals and he won’t stop until he gets there. And as much as I’m always happy to see an artist reach their personal definition of success – I take a great comfort in knowing that until he himself feels that he’s achieved that goal and satisfied his incredibly high standards, that there will be plenty of music to come from Drazah in the future.