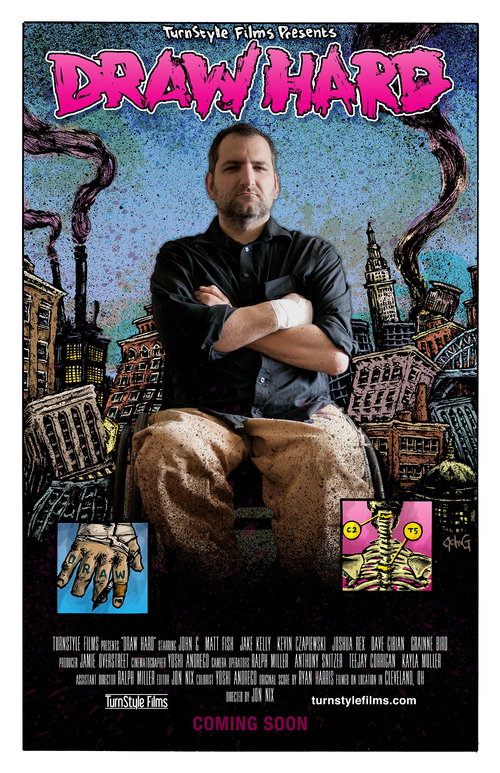 Here’s an interesting story about a guy I feel like I can relate to. You see, comic-book artist and illustrator John G. and I both suffer from a disease known as ‘resting bitch face,’ whereby everyone you’ve just shared a room with wonders ‘what the hell was up with that guy?’ as they whisper between themselves after we’ve left the room. Chances are, we’ve got something on our minds…different mediums of art perhaps, but we’re both artists in our own respective fields. I assemble words on a canvas of blank pages – John puts true, incredibly-skilled drawings right there on display. With astounding detail in his work, the best way I can put it was said directly in the preview of the documentary I’ve watched for Draw Hard – “It’s almost like it was burned rather than drawn.”

John G. himself caught a huge burn from life at one point after taking his bike out jumping dirt-piles as he’d normally do, crashed his bike and couldn’t get up. Thankfully, John G.’s story is one of redemption and not one that becomes similar to the movie Whose Life Is It Anyway with Richard Dreyfuss. Becoming paralyzed from the neck down, he endured intense physio-therapy to even be able to use his hands again…but it was possible. Through “trial and error, determination and the will to do it” he pushed himself to recapture his skills and relearn his craft from the ground up. Questioning himself and the universe’s plans for him all the while – he never gave up; and coming to the conclusion that this happened to him because he could “handle it” he preserved to the point where he’s come back to vibrant success as an artist once again.

We’re also alike in the sense that I don’t sleep either due to not knowing how to turn off my creativity…but other than that any parallels between us would only be a reflection of what I wish I could be like rather than the truth. John G. is a man of phenomenal character and this documentary is a justified testament to a man that has been through a lot to come out as successfully as he has. “If there’s something that I want to do – I’m going to find a way to do it,” says John G. – and you believe it because you know it’s true; he’s conquered an entire lifetimes worth of obstacles to overcome what he’s been through and his outlook remains positively inquisitive, healthy and thirsting for MORE life and MORE incredible experiences in the future to come.

“I don’t draw fast, I draw hard.” And if that doesn’t say it all I don’t know what does. I don’t write fast either…but I put 100% of my nuts into everything I do. I believe patience is a virtue and I think that true art should never be rushed; despite his incredible ability to produce amazing artwork in mere hours, it sounds like we’d agree on all this and that for the most part, the work simply flows through him and out onto the page at the rate & speed that it naturally occurs. If you have to wait an extra day to get yourself a piece of John G. art my recommendation is that you shut your mouth and let him do his thing. Exceptional, visionary quality like this is well worth the wait.

It seems like this documentary, Draw Hard, is going to manage to capture the full-scope and picture of what John G. is all about and the life he’s led. You’ll hear the crash story direct from him, the impact it makes, the struggle to come back and the triumph over tragedy the story eventually becomes. Spoiler alert – this guy is still alive, well, and kicking ass to this very day. With art rooted in the old-school, thick-lined, somewhat-obscure horror-comics of the 60’s and 70’s – what John G. doesn’t know is that I actually grew up on these myself and can absolutely relate to his style. I used to love reading comics like House Of Mystery when I’d stay at my Great Aunt Vicki’s place on Gossip Island here in British Columbia off the west coast. She had a whole stash of them…literally, closets-full, from when my uncle was a young kid and used to collect them. All complete with 10cent and 25cent costs…it’s an incredible collection and was a truly incredible time in comic-book art. To see that John G. is out there and creating something with deep respect for that style in today’s present-day is just another inspiring aspect of this admirable story.

And like all stories…the true determining factor is whether or not it’s a story that NEEDS to be told; and I think this qualifies without question. Draw Hard looks to bring attention to a visionary artist who has a story that’s as inspiring as it is captivating. Complete with time spent in the background of John’s life with those closest to him providing their thoughts onscreen, it’s not only a movie about a person that has respect for his art – it’s also a movie clearly made by people that love and respect art in all forms. The wonder and magic of art and its relationship to our very core is showcased in a shining display here on Draw Hard and I’m personally stoked to see the full film and learn the rest of the tale.

The full movie for Draw Hard is now available for streaming, released officially at the end of last month. You can find out more and watch the preview for yourself right here at the Turnstyle Films official page: http://www.turnstylefilms.com/