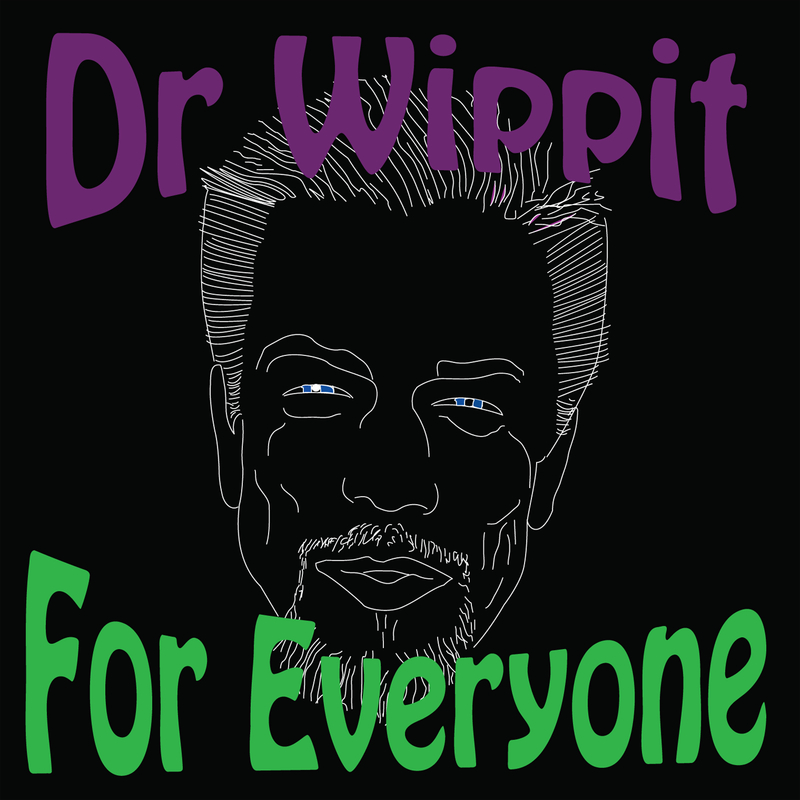 Dr Wippit – For Everyone – EP Review

Sometimes a song just has to get out. Socially-conscious songs aren’t the newest concept to music; however, they’re completely underground for the most part…the more successful you get in our modern day, more often you’ll see those opinions suppressed and morals compromised. The freedom of the independent artist allows them to fully express themselves without fear of repercussion to their careers – in fact, it can often be what makes them. Here in the case of Dr Wippit – we’ve found ourselves a highly aware, socially-adept album, unafraid to convey opinions here through exciting new music.

That being said…the ideas themselves, are all here. Ideas versus execution; can sometimes be a very tricky thing. I often think of Beethoven (the composer, not the dog) and how he was supposedly able to hear the entire symphony in his head, and write it down without even playing a note; the idea that this would somehow come out exactly as planned seems flawed to me, yet, again supposedly, he was able to pull this off time after time after time.

Dr Wippit, I think, for the most part pulls off the relationship between the artistic vision for this music and the execution itself, though there are a few hiccups here and there. The title and opening track, “For Everyone” would be one I’d point to; despite its funky groove, there are moments where its gets intense enough that timing gets tricky…Dr Wippit has a lot to say, sometimes it all comes out slightly jagged in both music and lyrics. Largely, that contributes to the overall ‘free’ feeling you’ll associate with this EP…to trade in what feels like spontaneity at points for a standard, more-tightened feel would be to cash-in the essence of Dr Wippit’s music entirely, and just not worth it. “For Everyone,” despite its loose-feel, still shows great promise right from the get go with thought-provoking lyrics, great guitars and a smart vocal flow.

Instantly, you get a change-up in sound completely as Dr Wippit ventures into the next track, “Yup.” This song…is awesome. What a great combination of a rap-verse meeting a highly melodic, droning chorus, both parts work extremely well. The electro-pulse of the music in the verse perfectly suits the incredible flow coming over the mic and the switch between these two dynamic sounds is pulled off flawlessly.

The final two cuts on this EP, “Paying For Lessons,” and “Swimming” both feature Brother Al lending a hand to these recordings. “Paying For Lessons” takes another step in diversifying the sound on this EP with a Cure-infused bass-line pumping it out with perfect rhythm and tone, a simple but completely effective and hook-laden part. It’s more of a ‘song’ perhaps than the previous two, in the sense that it’s a lot more traditional in the songwriting structure. Absolutely loving the guitar tone in the solo that occurs about two and a half minutes in and the strings that follow as the track opens up towards the end. As far as the drums are concerned, I felt like this was the most consistent beat and a standout from back on the throne for sure. Vocally…there are patches that work brilliantly, others that come through slightly flat, but overall another good idea here on record.

“Swimming,” brings me back to that Beethoven thought-process from above…I’m trying to imagine this song being stuck in the mind of Dr Wippit, then writing it down, heading to the studio to pick up the instruments and play it exactly as written. Like yeah RIGHT! There’s no possible way…at least I don’t think so…but no matter what the process is or was, this song is incredibly innovative and extremely inventive in its structure and sound. Big fan of the chorus in this track…it’s a simple chant of “Wake Up,” but it works perfectly…almost reminds me of something the Gandharvas would have come up with, and I freakin love that band. Much like the Gandharvas in many ways really – For Everyone pushes on the boundaries of musical genres and experiences a ton of success in breaking through to the other side.

So it’s not ‘normal.’ Doesn’t that just make it better by default? For this reviewer, the straight ahead path of the traditional musician isn’t always the most fascinating line to walk down…you know what I mean? Whether the ideas work fully or partially, is nearly irrelevant; if you’re looking to take us into a new experience in songwriting & sound, consider me onboard and yourselves in my highest regard. I think our planet needs a whole lot more Dr Wippit, and bands in that same vein; ones with true artistic vision, the courage to express REAL opinions and fully go after the random, beautiful and unique in sound and scope.

Find out more direct from http://drwippit.com