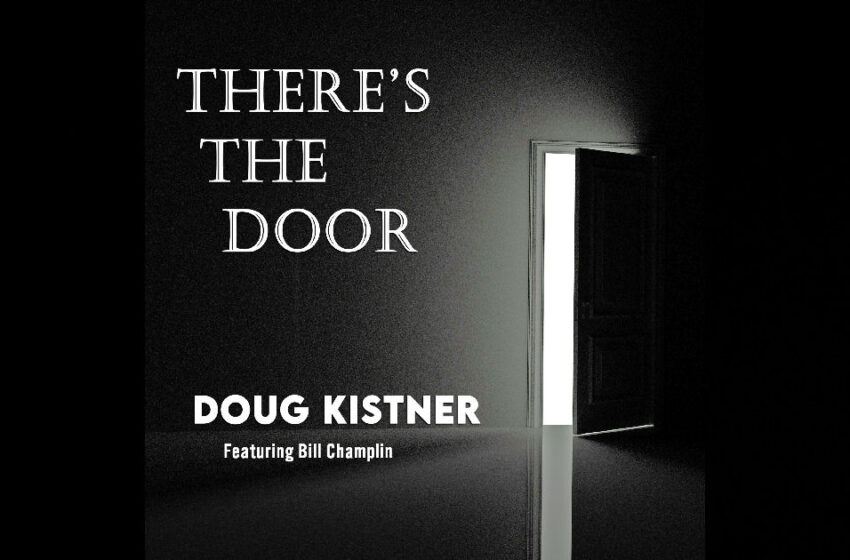 I had to marvel to myself, and even chuckle a little about my first experience in listening to “There’s The Door” as I headed back upstairs to get another coffee and contemplate what I was gonna write in this review.  Initial reactions are such a strange and fickle thing, and we’re livin’ in such crazy times y’all – and even though this is technically what I’m out here doin’ everyday, I’d still be the last person to tell you I necessarily absorb EVERYTHING on that first spin – in fact, quite often, I don’t; I’ll get a piece.

So here I am, listening to Doug sing “if you think freedom is the thing you really need, don’t look now but there’s the door” – and I’m thinkin’ to myself, “heck ya – finally, here’s a guy that gets the current state of things politically, and obviously feels just like I do.”  While there’s more than enough ambiguous and interpretive lyricism in this single, that I promise ya, I could build a case for “There’s The Door” being just as much of an anthem regarding the people that turned up to riot and ransack the capital…the very reason why I was chuckling to myself at the start is that because we’re living in SUCH divided and political times, this is all where my brain automatically jumps to in hearing words like ‘freedom’ come up in songs right now.  I was way off the mark in that first listen and just grabbing a piece without the full context…what Doug’s actually got is a song about a relationship gone south here – that’s really what’s up.  Nothing political, nothing devious, nothing more than just what was really in front of me all along – “There’s The Door” is about the struggles so many of us face in life & love; there’s nothing political about this at all!

That being said, like I was tellin’ ya – go back and have a listen to this single now from the perspective I was originally listening to it from, and I’m tellin’ ya – it could still be a possibility, but I think that’s the luck of interpretation and our own projection than it would be anything specifically intended.  You listen to the words within the theme that Doug is actually writing about, you factor in the style of the sound, you factor in the guest-stars he’s rockin’ with and their own backgrounds as musicians as well, and it becomes pretty easy to conclude that “There’s The Door” is a song about relationships, and not politics.  I don’t write any of this stuff in an attempt to be profound or even interesting when it comes right down to it, just honest – I’ve never claimed to be anything other than a single perspective floating in a whole sea of’em out there; I’m just here to communicate how we listen and explain how tunes get heard, interpreted, and listened to by what is inarguably the most average ears out there – the two of my own.

So let’s look at this how it was intended to be from the start – think of this song as the equivalent of the timeless wisdom of “if you love something, set it free…” – only in this case, it’s more like, ‘if you love something, and that something doesn’t understand you’re lovin’ it, or that love ain’t valued as much as some strange notion of freedom that’s somehow being stifled, then don’t be afraid to get them boots a-walkin’ and leave that ‘love’ behind’ – you follow me?  To me, “There’s The Door” is really about resolve at the end of the day…conviction by multiple definitions…and the realizing of self-worth at the very core; Doug’s actually got a brilliantly written track that gets right to the heart of what many people out there will be able to relate to in the push/pull of relationships.  If you’ve ever been on that one-sided trip where you’re secure in your relationship and the other person isn’t, or if you’ve ever been the kind of person that feels trapped within any situation outside of the single-life you know in coupling-up…if you’ve ever been seriously frustrated by knowing just how much YOU love someone without the other person have any REAL understanding of the depths of that feeling, or what it really means – you’ll find a ton to dig within the lyricism of this song for sure.  If “you want freedom, but you’re afraid to be alone” – this Bud right here, is quite probably for YOU.  “There’s The Door” is about realizing what love really is before it’s too late, and having the courage required to go after what it is that you really want.  The problem of course being that, as human beings, we damn near never have any real idea of what that is.

On a musical level, there’s absolutely nothing not to love about the way this whole song has been played and executed from start to finish.  Not only is Doug a seasoned vet in the game, with credits that reveal him touring with legendary names like Trans-Siberian Orchestra & Blood, Sweat And Tears – in addition to clearly having a professional’s touch on the keyboards & fantastic voice of his own, he’s also enlisted the superstar talents of Bill Champlin (Chicago) to bring his sensational vocals to “There’s The Door” and Liberty DeVitto (Billy Joel) to keep the drums as precision-perfect and as rock-steady as you could ever hope to hear.  So trust me when I tell ya, instrumentation-wise, vocals-wise…you’re on more than solid ground in listening to this tune about the shakiness of relationships and trials of the test of loyalty of the heart.  These dudes can play, they can sing, and there’s no doubt whatsoever that they get the maximum potential out of this cut.  As far as Champlin goes – if you grew up like I did, where Chicago had a legitimate chance of being played on a record, tape, or CD player at any given time in either of my Gen-X households, there’s no question that you’ll hear his essential contributions to this song when those luscious harmonies spark up.  All-in-all, you’ll find no complaints from me in regards to anything from the music to the microphone – I think the lead from Kistner came out bang-on with the emotion and tension it needed to make the words land with the impact they should, he’s got stellar tone that’s right on-point as well – having Champlin along with him, is truly the icing on the cake when combined.

Like LISTEN to the spot around the 2:30-2:40 mark!  I promise ya, that’d be enough to sell most people out there on this song right there in ten seconds, though obviously, I highly recommend listening to the whole cut, of course.  Doug’s written a really strong song here with a lot of bold emotion that speaks volumes on behalf of what loyalty, commitment, and love is all about within relationships – and even louder on behalf of just how hard these elements can be to maintain, even with that special someone.  “Be careful what you wish for – because you just might get it” folks – know your worth, at all times friends.

Stellar single!  “There’s The Door” comes out officially on November 12th – make sure to be the first to know when it officially lands on the internet by staying connected with Doug Kistner at Facebook here:  https://www.facebook.com/doug.kistner