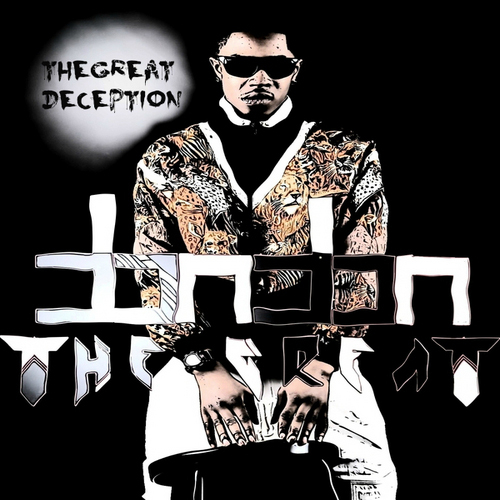 There’s a seriousness that runs deep throughout The Great Deception; you can hear DonDonTheGreat put the hard-work, sweat and the vicious-edge of conviction into the mic as he lets rhymes rip quickly with about a full novel’s worth of words in a verse. Starting with strong beginning in the opening track “The Deal Part 1,” you already get a massive dose of this guy’s ability to deliver a verse on beat and with a serious lyrical range. It sounds one-take…in the good way…I’m pretty sure DonDon is skilled enough to step up to the mic and lay all this down without pausing…it sounds that way in this opening track. Either way, it’s an impressive start.

But the tone drops to an even more hungry, determined and serious attitude on the following two tracks as this mixtape finds its way off the ground. “Mn To Chiraq (Remix)” brings a ferocious intensity and a killer low end beat; but it’s the attack that DonDonTheGreat puts into this track that makes it as incredible as it is. You straight-up will NOT hear effects used on vocals as well as this very often; everything he’s doing here works unbelievably well and what was a strong start has become outstanding, musically, vocally…it’s all working best right here off the drop and continues strong into “I Want It (Feat The O.G.)”

“Grindin” is one of those great tracks that mixes-up lyrics that are about as hard as they come alongside a nice melodic piano. The mix dips a little here as much as I like the track, it’s a little overboard on the low-end, something you can hear immediately smoothes out again on “No Flex.” The energy and the furious speed and precision from DonDon all spring back to life on this track as he takes a strange like…music-box-ish beat to the maximum with effects and a verse/chorus that really work well here.

“Monster (Feat. Tugga Dude)” is another excellent example of DonDon putting together a great atmosphere on a track. Tugga Dude comes in about 1000% over-top of the music, and as much as I like what he’s doing and appreciate his skills…this one could stand to be mixed into the beat just a little bit more as it’s not just a little bit above…it’s a lot, and it consequently makes the beat sound a little small in behind him. And of course, conversely, it makes Tugga Dude sound 60 feet tall…

Listen to the flow of “Taking Long.” Not only are the lyrics solid and on-point, the bend and shape of this flow is something you’ve just gotta have respect for. Great beat in behind this track, and overall definitely something I could listen to over and over; it sounds like a freestyle master is certainly at this microphone – I have serious doubt that DonDonTheGreat could ever run out of words to use.

“52 Bars” is another energetic track that really sounds like it was born in a stadium in front of a massive audience. The speed and clarity of DonDonTheGreat is definitely always in check and always delivered with perfect meter and real passion. This guy believes in his material, and with his skillset, he should sound as confident as he does. “Mr. Wrong” is another track where you can hear in DDTG’s delivery that he feels the beat about 10% more. The sample on this one’s a little on the rough-side…maybe a lot…but the beat itself, and the lyrics spit-out are excellent.

I really liked the vibe on “Most Of Today,” and it was a much-needed break from the overall intensity of DonDonTheGreat into a track just as intense, but in an entirely different feel and sound. This track works incredibly well, featuring Tripsz, whom it sounds like took DonDonTheGreat in a different direction for this track late in The Great Deception, and again, it works very well.

Again…production-wise, there’s a little work still to be done here. “Out Of My Head” makes the most out of its incredible beat and featuring of Ian Everson by immediately coming up about 25% in volume…be warned. There’s no doubt of the intent; this is a track you want to turn up…like, a LOT. Great beat here and excellent verse from DonDonTheGreat who comes in stopping and starting and then just flows and flows perfectly along this beat into a wicked breakdown and re-build-up to the hook.

In the late stages of this album, that was the right impact to leave us with. Excellent energy on that track, bright in the mix, and really left me with a lasting impression. I like DonDonTheGreat when he’s ripping through electro-based beats up-tempo like this, or more in-your-face like way back on “Mn To Chiraq.” However he steps up to the mic, he seems to nail it down tight every time.