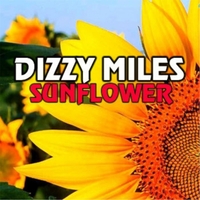 Definitely an album full of inventive summer-sounds from Dizzy Miles here on Sunflower…this a very bright collection of music that should do no less than put a hammock-sized grin in the middle of your face. A solid collection of acid-jazz electro, Sunflower starts up with the short & inspiring melody of “Dark Elegance,” quickly impressing my ears with a beautiful flow to the song that I can’t get enough of. I mean – how could ANYONE? It’s less than two-minutes long, chockfull of awesomeness and starts out Sunflower in full-bloom, instantly supplying you with a reason to start this album all over again once it ends.

If anything, “Dark Elegance” might have almost made too much of an impression! Though I instantly knew I’d want to hear that sound & style again, it almost made “Meadowview,” the track to follow almost unbearable – and that’s not fair, it’s a good tune. In comparison to Sunflower’s opening track however, this sound is so bright & cheery that it nearly feels like an intro to a show on the Disney Channel. Again…not much can be taken away from the song so much, it’s assembled, produced & performed every bit as well as “Dark Elegance” was, just a massive shift of sound early on in Sunflower between the two that you might not expect. It might work for some…for me it was a little jarring, switching electro-emotions like this so rapidly into the album.

I wanted to shout-out ‘somebody up there likes me’ once “Buddha Watches Over” started up; Dizzy Miles returns to a sound & style a little more mature and closer to “Dark Elegance” than the preceding song was. And I dunno what else to tell you…I try to keep the ego in-check as best I can, but…doesn’t “Buddha Watches Over” kinda prove me right? If these are the two moods Dizzy Miles would flip between I’d assume nearly all of us except the lithium-crowd would be choosing the more dark & melodic acid-jazz grooves over the bright & cheery atmosphere in “Meadowview.” Two gears, two styles…but one that I’d absolutely personally prefer and was hoping would continue to dominate the overall atmosphere on Sunflower in the songs to come. “Buddha Watches Over” has a sweetness to it, but not cavity-inducing…just the right amount to put you at ease and perfectly relax the vibe; similar to something you might find in the more uplifting tunes of Boards Of Canada or Four Tet.

I couldn’t possibly name a track that rides the edge of like, EVERYTHING, like “Noise Factor” seems to for me. With step back towards the bright & cheery…it doesn’t quite go overboard…it’s pulled in enough that it still sounds listenable for my personal taste. That being said, the electro-steel-drum melody line also straddles the edge of how much of it I can take, and perhaps “Noise Factor” relies a little too much on that one derivative of the song. Just as I’ve about had enough, Dizzy Miles takes it away for a quick breakdown that’s nearly too simplified and overdone, but entirely listenable and a perfect fit. So like…what do you do with a track when the push/pull factor of the sound is damn near frustrating to listen to but you’re STILL bobbing your head to the beat? I wave the white-flag sir…there’s a lot I have the impulse to want changed, but also a lot I can’t deny about the song…it worms its way into you with some pretty out-there hooks!

But by this point, you can almost sense the ebb & flow of this album as “Uncle Floyd” heads back to the more laid-back & mellowed-out style I love from Dizzy Miles. I found good ol’ “Uncle Floyd” to have a mechanical-like grind to its beat, it churns along solidly and steadily and puts out a good sound; the slow & steady nature of this cut grooves in a chilled-out way. Almost hypnotic in its smooth-rolling along, you might not just realize how much of your attention this song this has until it ends and you feel the absence like a Linus without his safety-blanket.

I think that as far as bridging the gap in between his brighter & darker melodies, “The Browne Sistas” does the best job of being too much of neither and the perfect balance of both. Still a little more playful than the more mellow tracks from Sunflower, it also comes with a lot of energy & uplifting tones in the music that make for a thoroughly enjoyable listen for sure. It’s almost a nod towards some classic sounds from the mid-80’s love-songs, but subtle in nature and not overly-dominant; it still retains the perspective & touch of Dizzy Miles completely. I think of bands like Lemon Jelly on a tune like this, and on “Larkspur,” the final tune which also had quite a familiar feel in the melody-line. Another interesting mix on this final cut, like it’s also in between the two main-styles of Dizzy Miles as well, only this time more on the ‘darker’ side of the spectrum just slightly. I don’t quite know if the mix of the metronomic-style beat truly worked for me in full…it had its moments but something about the juxtaposition of the beat & main-melody didn’t seem to fully mix together in an easy way to listen to.

And there you have it. Moments that’ll make you smile, moments that will make you smile bigger, and depending on your personal taste perhaps a whole new slew of cheery tunes to keep your days nice & bright. For myself, I think there were some extraordinary flashes of brilliance with a few tunes in between that reflect the joy Dizzy Miles creates while making music – and I respect that even if it didn’t make for the most cohesive listening experience I’ve had this year by a stretch. There are definitely great songs on Sunflower…depending on your own taste, there could be many great songs here for ya.