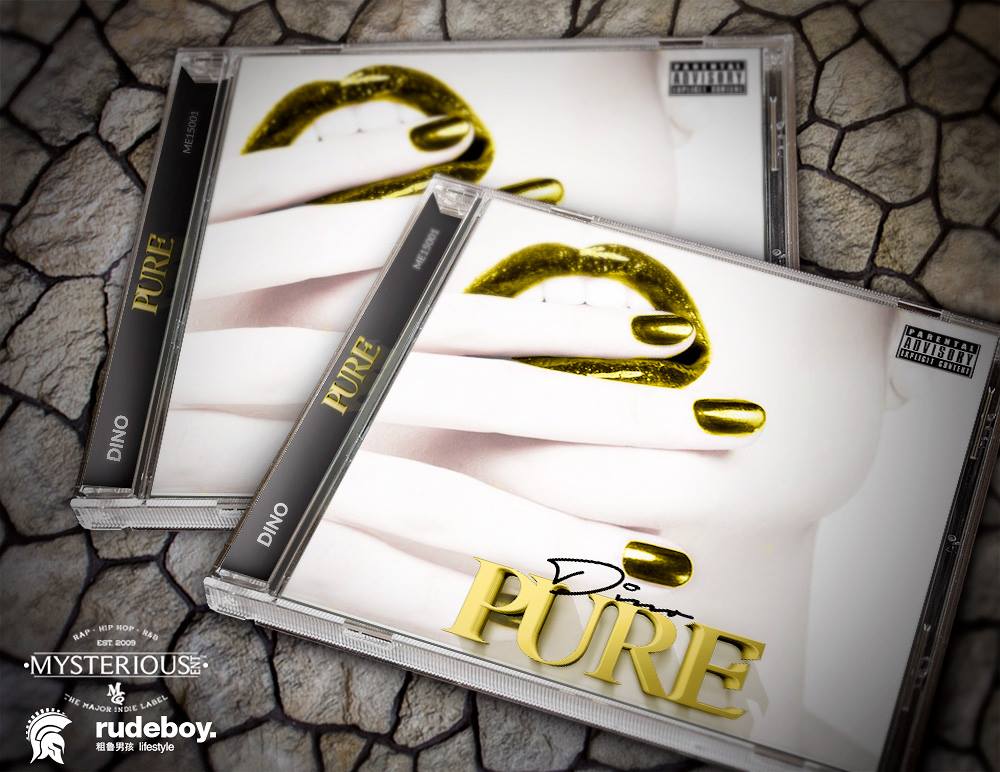 I can get behind this for sure.  I had to take a moment and think about how rare I feel the connection to modern-day rap and appreciate that it was an audible element of what makes Dino’s new Pure EP wildly entertaining and engaging to listen to.  What Dino has done over the seven-track span of his new record is focused, lean & mean…but it’s got plenty of attitude, guest stars and serious rump-shakin’ energy rumbling through the low-end-heavy mixes and tight beats.  I always appreciate hearing music that really sounds like it got to the apex of its completion without wandering into territory or songs that don’t fit the cohesion of the rest of the set…I’m impressed with the amount of threads in Dino’s music that ties each of these songs together for a really wicked listening experience all-around on the Pure EP.  For reals…there’s a serious amount of beats to come at ya – push play!

By doing so, you’ll get right into the nitty-gritty with Dino immediately on the “Intro” that opens up the record, find out what’s driving him forward and get the inspiring messages of a music-hustler determined to make his mark and get his.  Dynamic punch to the mix when the “Intro” shifts into solid bars for Dino to rhyme over…great transition in the energy of the record right there at that moment as Dino confidently introduces himself to the world and kicks the Pure EP into gear.

Into gear, into the low-end, into the guest appearances…”K.I.G.” gets into all that and more.  Really impressed by the mix on this cut…the low-end is MASSIVE and it’s got spot-on clarity in the song; when it swells up, this track becomes absolutely huge and when Dino takes it away the effect is equally large.  Really well-edited and structured beat, perfectly produced & served hot’n’fresh, leaving it up to Dino and his homeboy Lil Flip to hit their bars with something that hits the mark just as strong.  Neither emcee drops the mic when they’re called upon…in fact, they stand up real tall and loom with large presence like a shadow in the alley right over your shoulder.  Well-paced, complex lyrics all perfectly metered to the beat & spit with attitude, strength and clarity…”K.I.G.” gets the EP rolling strong.

What you’ll really start to notice and appreciate from the time “Slow Grippin” starts out…is that by now we’ve experienced three cuts that all demonstrate a real grip on what a hook is all about, current track certainly included in that count.  “Slow Grippin” probably caught my attention the quickest…I dig the low-down vocals in the hook and how the words flow – it starts the track off on a perfect note.  Dino comes in delivering solid bar after solid bar…you gotta dig the amount of his own personality and character he’s really put into his delivery.  Coming back to one of my original points about this record – that vibrant connection you can hear in Dino’s music is all over the sound of “Slow Grippin.”  You can hear this emcee has no issue with speaking his mind and never holds back when it comes to matters of the mic.  Amazingly chilled-out vibe & beat to “Slow Grippin” that I thought was seriously awesome.

As much as I liked “Slow Grippin” personally…I think they even took it up a notch in terms of accessibility with “Imma Holla” – this is a jam that’s built on Pure entertainment.  A perfect blend of everything from the old-school to the new…”Imma Holla” makes its real magic happen in the roll and flow of the chorus – everything comes up with a solid checkmark in the win column when it comes to the execution here.  You’ll notice too that Dino is really making this track work with a minimal but highly effective beat and subtle melody guiding him along – but other than a few spare sounds, this entire track is resting on his shoulders and up to him to deliver…and MAN does he ever hit this one hard!  Relevant lyrics and sound for today’s club – “Imma Holla” is a whole block-party contained within the confines of one hot track.

Dino amps up the energy even further as he twists rhymes with homie H.K.K. (aka Hot Kitty Kat) in the mix on “Down Low.”  Drawing on that club style once again…the sleek & sexy movements of the music mirror the themes in the lyrics…I mean…this track is practically written for the pole y’all – know what I mean?  Again though – credit to Dino’s real understanding and balance of his sound & writing…this guy truly ‘gets it’ – the hook in “Down Low” is massively strong and really pops & stands out just like it should in the mix.  Another solid job on keeping the low-end effective and hitting that threshold perfectly in the production…the guest star bars from H.K.K. absolutely hit the mark and keep the track weaving dynamically as it transitions and flows…there’s lots to listen to on “Down Low” from the verse to the chorus and it delivers real entertainment for the ears.

Lyrically…”All 4 Walls” was completely impressive.  Not only does Dino have you cracking a serious smile throughout half of the descriptions he rhymes about in the verse but the filters & effects added to the hook in the chorus set the whole track right off.  The words themselves are fantastic yes – but a lot about what makes “All 4 Walls” as memorable as it is, is the melody in the lyrics as Dino bends and shifts them; whether its manually in the high-speed of the verse or chromatically through the pitch-shifting in the chorus, Dino’s bending these words to his will with a masterful grip on the mic.  The result is something that sounds highly unique to the ear AND has seriously strong pull through the hook of the way the lyrics flow in every part of this song.  Once again keeping it minimal in the music has beefed up Dino’s performance and production…definitely an emcee that’s ready to rise to the occasion – I dig that.

You WILL notice the verse on the final track “In Da Trap” featuring Minus.  The hook comes out sounding memorable once again and I dig how it’s edited & performed – but listen to the extra aggression in the attitude that Dino brings to his bars on this one…loved the sound of his verse and the added energy he brought to it.  Speaking of energy – check out the blazing verse that Minus puts into this one…like…DAMN!  This emcee has the track ripping along at its finest as he flows through the second minute like Usain Bolt flows from 0-60 in less than ten seconds…love the pace and love the tone – I thought this was another example of a collaboration that really worked well on this record, but let’s also face facts – they truly ALL showed up when it comes to the performances of the featured guests on this EP.

Only criticism I have is extremely minor and from what I heard on the Pure EP – Dino might have realized this also about halfway through the record.  As much as it instantly makes me sound old to say it – shouting out the brand at the beginning of the song isn’t ever an engaging thing for the people as listeners…it’s just not.  It’s highly effective as an advertisement…but then of course you have to ask yourself if that’s really what you want the first thing people to hear in your music like they’re waiting for the ad on a YouTube video, know what I mean?  Thankfully it doesn’t interfere all that much with this record and at one point or another, Dino drops it from occurring altogether…which again, I think was the smart play.  Boss Beats deserves their shout-outs for a fantastic job & I get that…but that’s what liner-notes and album credits are for…all I’m saying is make way for the man to do his thang on the mic…we don’t need to eat them bars up with this kinda stuff when there’s so much to offer around every corner on Dino’s tracks throughout the Pure EP.  All this being said…it’s a minor observance at best…I don’t want to take away from the fact that this emcee has truly nailed it here with an entirely vibrant & lively set of seven cuts, because he truly has – the Pure EP is highly dynamic, versatile and has really impressive movement & flow.

Find out more about Dino through the Mysterious Entertainment label at Facebook:  https://www.facebook.com/MysteriousEntLLC