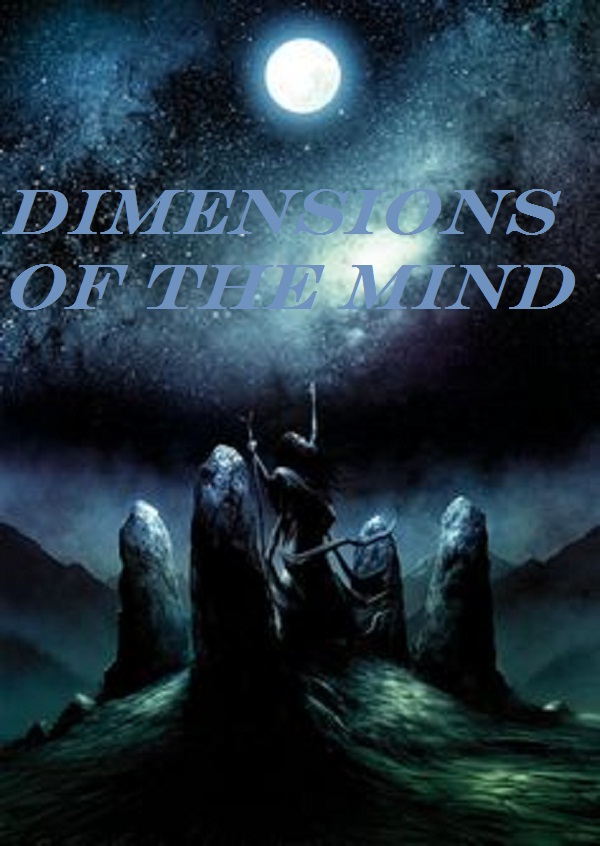 Into the subjective world of art & music, here we come!

Dimensions Of The Mind, helmed by creative writer & poet Keefier Phillips is a somewhat experimental project; part spoken-word, part untamed-music and all with a conscious effort to create art-pieces within these tracks as opposed to traditional verse/chorus/verse like all the rest of the kids in the sandbox. Phillips clearly doesn’t walk the same straight-line from point-A to point-B like everyone else does…and you know we love that here…

What we’ve got our hands and ears around are the demo-releases for upcoming Dimensions Of The Mind album Ancient Times – and of course, being a demo…there are bound to be a whole bunch of changes in between now and the album itself – but it should be pretty cool to check out what’s coming up in its raw-form, untainted. But for real…when I say we’re in the early-stages of it all, I’m not even kidding; from the artist direct, the upcoming album is Ancient Times…yet, if you pop on over to the page for Dimensions Of The Mind at Reverb Nation, you’ll find the upcoming album is titled Ancient Ways…so…yeah…as I’ve mentioned, still lots being worked out over there before this beast is fully finalized and ready for release.

I dig the tremolo-guitar melody-line of “A Reason” as it opens. Once the spoken-word comes in, the music settles a bit, brightens-up in volume…and slightly overshadows the words coming out. Often masked by the swirl of the effects on the music/guitar and with the added reverb onto the vocals…they tend to drift right into the music at times, becoming unrecognizable to the ears. So…ring the bell and get ready to start the fight right people? It’s ART…so which direction does our humble-reviewer head towards? I could play it safe and hide behind the ‘art’ aspect all review long…in fact, I bet many will! Because it could be as simple as saying that, leaving it at that, and virtually pass on no valuable insight that may/may-not tell you anything about it other than art is truly subjective and we all perceive it differently. And yeah…I could do that. But I won’t. That’s what opinions are for…and welcome to mine!

But before I get too far into whatever I might or might-not like about what’s on these demo-cuts, let me first make clear that a project like this carries a massive amount of weight with me…I respect artists that choose to go against the grain, and I certainly love spoken-word even though I tend to write about 50% more than I speak myself these days! But inarguably – there is complete value in finding unique avenues to explore in music; and in that respect, Dimensions Of The Mind is already victorious.

And because the sounds, effects and ideas shift so far from and between each other – these demos move quickly into “Blood Moon” which I thought immediately improved on the clarity in the vocals. I mean…for me…this is spoken-WORD…and for me, at least from the perspective of a writer…those words are the instrument here…I think it’s only fitting that they be heard. That can’t just be me right? So for me…the difference in something like hearing the thought-provoking poetry of Keefier come to life through “Blood Moon” made all the difference in comparison to “A Reason” and the way that sounded. Again…I could hide behind the ‘art’ thang…and I’m a long-supporter of effects on vocals; hell, I even love auto-tune in a world where it’s been hated on by as many people that love it too – but again, I see the value in changing it up and making it all different, creative and unique. I loved the sample that starts up “Blood Moon” and I think it really sets the stage for the theme behind the lyrics to follow, which are also solid. I thought this particular tune had a little trouble in the mix and perhaps a little in the guitar-department. Sometimes those guitar-notes are right where they should be, and other times they don’t quite line-up in ways that will make any sense to your brain. It’s played as if the beat alongside it is welcome to jam in the same room…it just shouldn’t start expecting that the guitar is going to pay it all of its attention. So…verdict being…lyrically & vocally, it came out stronger than “A Reason” for me, but I felt “Blood Moon” needed a little more focus and a little less avant-garde in the music supporting the words.

A little mix-work again necessary for the switch between the sample of Brad Pitt’s iconic rant from Fight Club and the transition into the spoken-word of “Breakdown The Government.” There’s definitely an issue on this track that needs a little ironing out in the balance between hi-end and low-end. Nearly everything about “Breakdown The Government” is mired in turned-up treble-tones…which might have worked for the vocals or the guitar separately…but both together create somewhat of a grating sound to the ears. Again…spoken-word-wise…you want those words to come out in ways that will truly resonate with us and be easy to digest…so that we can get to their meanings and understand what the artist in question is communicating. Or in art…you can help yourself to a smorgasbord of the bizarre and go any direction you like…it again just depends on what’s important to Dimensions Of The Mind overall. The main difference being…when spoken & heard clearly, it’s spoken-word; and when they drift into the main mix or become so effect-laden that the words become arbitrary, it becomes closer to noise-rock.

That being said…the drum-tracks on these songs are actually pretty damn killer all the way through – I really like the way that they sound and move throughout these demo-tunes and would think that overall, that’s the area that needs the least touch-ups at the moment. Especially when you hear something like “Change In Times” – which I don’t think I’d change a thing about. And I know what you’re thinking, yes yes…some of these words are obscured as well; so why don’t I feel like I did when I listened to “A Reason?” Simple really – I like a ‘reason to return’ – I do it through visuals when making videos all the time. I don’t think we need to ‘get’ everything the first time around…one of the best thing about videos/music is that you can hear new things on subsequent plays! I think that Keefier really hit his stride in the tone, energy and emotion that is put into “Change In Times” – this is where the vision is coming to full-fruition. The music is incredibly well-layered and chosen…with a low, somewhat-tribal rumble that sounds like the moments before charging into battle; the words themselves harbour and display a hunger, desperation and astute observations about evolution and the cause/need for change.

Something like “Democrips And Bloodicans” would no-doubt be a fairly polarizing song as well. Slipping into a much harder rock-vein…you might dig that style cutting deeper into the words – or you might like the tunes with a little less in-your-faceness to the rock. I can see both sides of that…and Keefier does seem to function well on both-sides of that fence…again, just depends on what you enjoy more from him and his Dimensions Of The Mind. The words themselves demand that extra-menacing drip of aggression…and with time and a little more mixology, I think he’ll have this one sitting in all the right spots. Excellent breakdown in this one that absolutely flexes some musical-muscle.

If I did have to choose a favourite on what I’ve heard in these demos…I’d be hard-pressed to not choose “Message From The People.” Speaking words of truth, wisdom and observations on social consciousness…everything comes across completely clearly on this song. The music and its percussion-led beat sound extraordinary in their rhythm and pulse…and its melancholy, desolate sound fuel the reality in the words themselves. It’s a pensive-song that is designed to reach you…to make you think…and hopefully to rally the people and awaken a few minds out there. It’s all on-point…there’s no raving madman here…what Keefier says makes a great deal of sense…but where this track makes all the difference in the world is in the delivery and how these words truly reach you.

The only rough thing about listening to a demo in some cases…is that sometimes you have no clue about what the finalized order of the tracks might be…which is the case here tonight with this review on Dimensions Of The Mind. Sometimes you can get extraordinarily lucky and leave on the perfect note, even with a randomized or alphabetical-order…sometimes not so much. The final track I listened to, “The Illuminati” needs about as much work as the car that Al Bundy pushed into his driveway daily after working at the shoe-store. The guitar chords & melody-line in the music are somewhat abrasive and jarring…timing-issues are revealed later on throughout…but the overall idea/concept/music is one that I think needs to spend a little more time incubating. The words are phrased well…but the subject-matter…mannnnnnn…I don’t know what else to say other than the Illuminati is the new ‘chicks & cars’ of song-writing out there in our present day. I feel like not a day goes by right now where I’m not hearing another song dealing with this international-conspiracy…and personally…it’s just not even something that needs to occupy a second of my mindspace…

But that’s where this will get interesting post-review…is whether or not the mind is completely tainted and overcome by incessant Illumanati-attacks daily…or whether this opinion can be accepted! Generally-speaking…if you’re not instantly gelling with the conspiracy-theories and allowing your every waking thought to be consumed by the Illuminati…then…hate to tell ya this…but you’ve already been assimilated & they’re already using your love of Kanye West to control the world somehow…which in this case, being a complete non-believer in any of that myself…looks like they got to me. On that subject…I prefer to think of it differently…in that I CAN think about it differently…and choose not to altogether.  They only exist if you let them…but…like the great Cobain once said himself, to counter my own point…”Just because you’re paranoid, don’t mean they’re not after you…”

Still with another angle…you can choose to see this for what it truly is, which is something every spoken-word artist should aspire to…and that’s to be thought-provoking…to make music worthy of examination and discussion. Despite some rough-edges that may/may-not smooth-out in the final album cuts – there’s a lot of substance here in what is happening in the music & words of Dimensions Of The Mind; and it certainly has the possibilities & potential to head in any direction and find ears of all kinds to secure a permanent residence in.