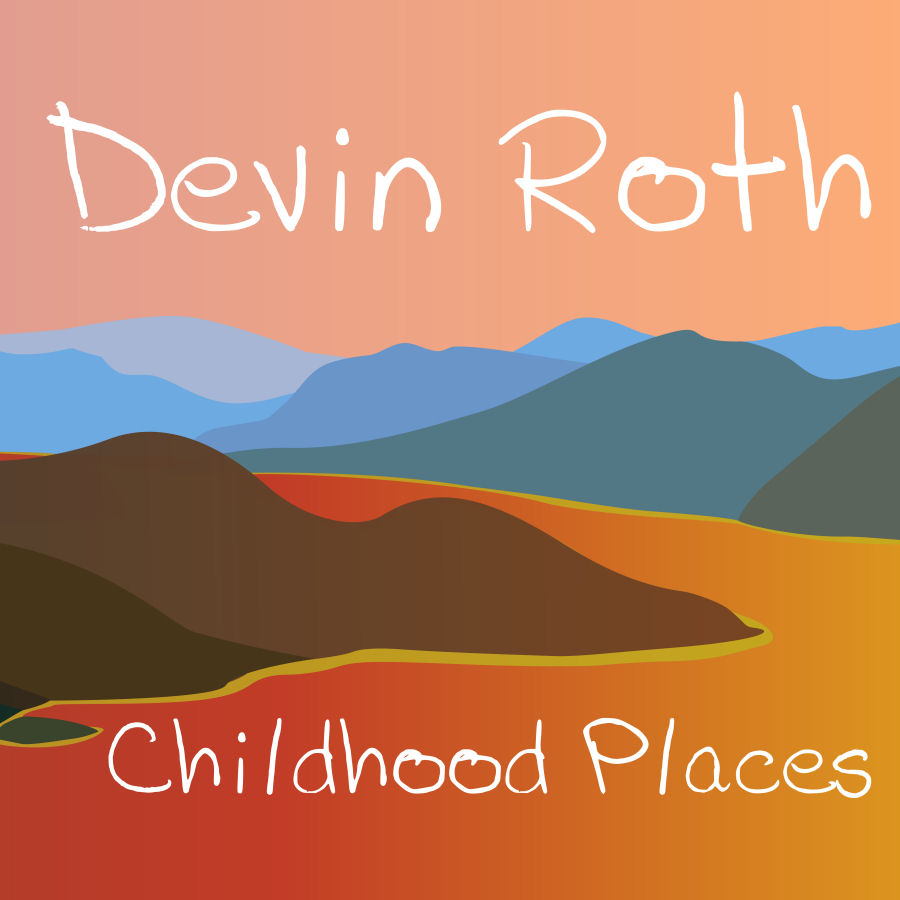 A cool concept, expert musicianship and wild, sprawling & expansive ideas fill the minutes on Devin Roth’s latest album, Childhood Places. Inspired by various places he’s presumably spent time or visited…or however these areas have affected & played a role in his life; the atmosphere of locations & moods themselves makes a subtle guest-appearance through the nine new tracks offered on Devin’s latest effort.

As the labelling suggests…I thought perhaps this could be a solo act until the moment that “The Quarry” opened up the new album. Once the music started I simply thought to myself – ‘how in the heck is one dude playing ALL of this?’

It turns out, audibly-obviously to anyone listening already, that you’d need to have a set of official octopus arms to be able to pull all this off as one man; so of course he’s got some assistance! And of all, I think we’ve got Derek Friesen making himself the most known right off the bat with excellent trumpet work in the opening song, “The Quarry.” This avant-garde style of jazz music roams through all sorts of greatness through the excellent drums of Steve Wilkinson to the awesome piano of the man himself, Devin Roth. Fantastic trombone sounds from Jon Kenney and sax-work from Andrew Van Tassel to go with the bass-lines from Ehud Ettun; this opening song sounds really grooving and for the incredible amount of different elements they’re all combining, well, this piece certainly indicates that this band when playing together certainly becomes one massively cohesive entity.

BUT! I’ve gotta say…this Devin Roth guy has truly got to be one heck of a gentleman, or he’s a lot more willing to share that spotlight than you’d assume you’d find from a solo-artist. Allowing all of these talented players to really have their own shining moments throughout that first track really gives you the sense that Devin’s project here, or career in music, is certainly one of inclusion and sharing. And honestly I think you can hear that in the music, which gives it all an additional, fantastic dimension.

As the second cut, “Longing” starts out, Devin inserts himself a little more into this track to lead the way through beautiful & subtle piano work, often against wicked sounds from the trombone but also left for a substantial portion of this song to carry the weight of the minutes and seconds passing by. What a wonderful job he does, particularly towards the middle as he really starts to rip on those keys and leaves behind subtlety for a vibrant display of leadership in music. As “Longing” continues, the instruments surrounding slowly drop out nearly all together for a good two minutes to leave him on his own before reuniting in the last minute to end this track on a truly superb note with a lot of style, ambition and grace.

“Longing” leads PERFECTLY into the music of “Thelma,” which is a track I fell in love with pretty quickly. Their timing is flawless, the bass comes out super-smooth throughout this entire song and really demonstrates a lower-key vibe of the reckless-abandon/avant-garde style that Devin Roth and his team of ace musicians are starting to become famous for within these eardrums of mine. Love the melancholy, the beautiful, the melody…it’s all here in this understated gem that is “Thelma.”

The piano opening of “Kettle River” is a rad departure into a more low-end rhythm that is brought to life quickly through the shining talents of the brass section. Listen to the instrumentation here! What a great journey this song starts into and continues to be throughout. The trumpet is just on gorgeous display here with real highlights from the performance put in by Friesen; clearly a man that knows his way around the horns…this guy is playing perfectly and with a tremendous depth of skill. All the while, Roth and associates are killing it all around him, just slaying their own parts and delivering one of the most diverse tracks on Childhood Places. At nearly eight minutes long, it wanders and winds through various tempos and features the immense sum-total talent of this band in full; they’re great as individual players, but MAN have they certainly stumbled onto something fantastic when playing together.

The brass again takes a sparkling moment at the outset of “Losing A Winning Battle,” a song I nearly loved through the title alone, but thankfully the music to follow would go on to again be some of the best you can hear on this album. The saxophone on this one is incredible – smooth, solid tones break way for the trumpet where Friesen can do no wrong. Roth himself is a lot more subtle here in this track…at times I’m not quite sure where or if there’s a piano supporting this one…if anything I figure maybe he’s on keyboards for this one… In any event, this is again an indication of just how inclusive this artist is in taking the band along with him into the spotlight and I think that speaks to a fantastic character of an egoless musician who is humble and willing to recognize and spotlight the talents surrounding him.

No question about it though, Roth springs to vibrant life on “Borderline Blues,” in an incredible performance that puts the passion he plays with right into your speakers, ears and soul. It’s excellent. Purely excellent. The piano can be such an expressive instrument…it really does take someone that really understands it to bring it to life like he seems to be able to. You could tap those keys all day long and not get this same fantastic result he achieves even if you played every note he plays…the true passion and innovation of his inventive style really comes through clearly on “Borderline Blues.”

LOL – that title just sunk into my brain; “Borderline Blues.” I mean…at BEST it’s borderline guys…I’m not generally a blues fan but man do I love me some good jazz. As this one creeps towards the fifth minute, Ettun brings the bass out to play and really makes this track possess a little sass & attitude before its final moments. “Borderline Blues” – maybe. A solid good time & excellent listen though? Guaranteed.

The following melodies on “Mountain Dream” might truly be some of the best on Childhood Places. This song floats along dreamily, clearly and precisely all the while still maintaining a somewhat thrashy-feel as parts drift in & out beautifully. At times it breaks down to just above the quiet…and at others, random bursts from any given section of the music could pop out to join in the fun. How players can remember all the intricate moments, tempo switches, style & directional changes literally makes my head spin. You pretty much cannot be anything other than a world-class musician to be able to make music like these six incredible players do…they should all be immensely proud of what they’ve achieved here together on this record.

“Okanagan Mountain…” okay…wait a cotton-pickin or bass-pluckin minute here…now this band has found the atmosphere of my own backyard? It would take me about three-four hours to drive to the Okanagan from here…and Devin Roth & his crew are a considerable distance further from that being based out of L.A.! But somehow…again, assuming they’re all basing this song of elements of the past experiences they’ve had or shared…manages to capture the true essence of the Valley and the mountain-esque imagery that comes along with this song is nothing short of entirely majestic. The final two minutes of this song are simply amazing…I love how it breaks away towards that final moment…it’s a song that really allows you to see what the music is playing visually in your mind.

Of course…all of this could be completely based on the fact that I live right beside it and have visited that area myself many, many times. The beautiful nature of the Okanagan really does translate into gorgeous music if you get it all just right like Devin Roth and his five amazing cohorts do on “Okanagan Mountain.”

As the album winds down with the final song, “Catharsis,” you realize you have to give these guys a whole ton of credit for examining each and every element that goes into their music, right up to the titles themselves. It’s expertly done, truly. “Catharsis” is one of those tracks that really allows the mind to wander and dance freely. Ettun again becomes a massive highlight on this song with playful bass that is just astoundingly well played around the second & third minutes…I mean…it’s not like he’s off or making mistakes at any other moment…but in that spot in particular, this man shines like a freakin’ Hope Diamond.

Throughout the final moments of “Catharsis,” this band continues to display all the talent and skill in their combination that has made this one of the most entertaining jazz albums I’ve ever personally got my ears around. Their ability to work together…to know what’s coming up…to NAIL it like they do…has nearly had my jaw on the ground the entire time I’ve been listening. Were it not for the intense amount of spiders around in BC, Canada right now…well…I’d probably have just left it sitting there agape.

I don’t know if there’s anything I love more than finding something I might not typically listen to that works this incredibly well. I’m a jazz fan…but I’m not always the first guy to put it on over here at sleepingbagstudios, I can admit that.

I can also admit, that now that I’ve stumbled onto the incredible ideas and innovation of Devin Roth and his fantastic band…that jazz is certainly something you’ll probably hear echoing from these studio walls a LOT more.

Okay. Apologies. I was going to wrap this up and be done on that incredible last statement…but I realized I hadn’t even mentioned that this is actually Roth’s DEBUT album… In addition to that – he once lived here himself before moving onto various cities to study and refine his sound and style. And when realizing that…this homage to his home becomes so much more sentimental, but maintains the genuine love he has for these memories without ever dipping into the cheese-sauce once.

I said it before, and I’ll say it again…especially considering this is a DEBUT and how freakin’ YOUNG this guy looks…this album is astonishing when examined under that lens. Not a single hand that had a role or played on this album should be anything less than extremely proud of this incredible accomplishment and truly captivating record.