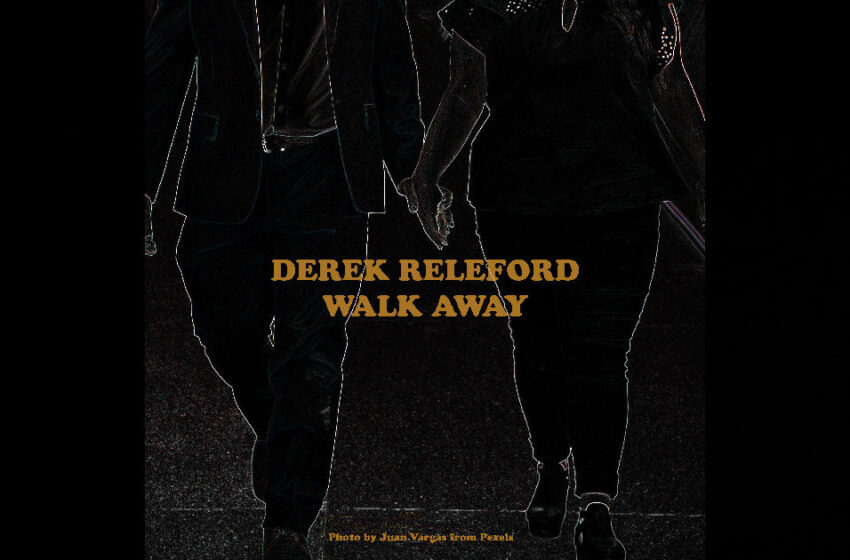 So here’s the deal…

Artists & bands that regularly seek us out here at SBS, become the toughest to write about over time.  I’m not necessarily talking about you folks that release a record once a year or every two – I’m talking about the people out there that hit me up month after month like anyone can just magically continue to write about ANY topic over & over & over…that’s what makes it tough.  I’ve never gone full-on Randall Graves from behind the store counter in the movie Clerks, but I have my moments like anybody would.  Sometimes I see a name pop onto my playlist, and rather than become elated about the fact there’s new music to listen to & write about and that the lights will stay on here at the studio for another month, I end up stressing out more in just thinking about how on earth I could write yet another couple pages, or why someone would even want that…that’s the reality, and quite often more than I’d probably even like to admit it.

And then there’s Derek.

Derek’s the type of dude that’ll probably make me both extremely happy & sad to see him pop in again.  On the one hand, the guy is a phenomenal talent who has an incredibly rad voice, writes a great tune, is still technically the lead-singer/guitarist for the band Trevino, and does a shit ton of other things for the music-scene & creative community through his work as the owner/operator of Back Home Media.  What I heard from this guy back in 2015 on Trevino’s album Born Again Bored Again is still one of the most exciting things I’ve stumbled across in music to this very day, and a project with unbelievable potential.  Still.  To both things.  So as happy as I am to see the man back in action in 2021…believe me when I say it comes with a massive shake of the ol’ head over here and genuine confusion over what keeps him away.  If you had this guy’s talent, you’d be making music all day, every day…that’s the facts.  In a world where I couldn’t even shove the regulars at our pages here away if I tried, I have the complete opposite problem when it comes to Derek Releford it seems – I don’t get the opportunity to write about this guy enough.

On the other hand, is just a guy sitting miles & miles across the internet in Canada, waiting for Derek to do his thing, and drop some more tunes…and as infrequent as that event may be, sometimes we all just gotta take what we can get.  Patience ain’t my virtue when it comes to music and my job is to encourage the scene in whatever ways I can…and in both of these areas, I feel like I’ve failed the man big-time.  Was it something I said, or something I didn’t?  How did anyone in his band read our review of Trevino & not come out ready to head right back into the studio again & feeling like that next record was right around the corner?

Anyhow.  It is what it is, as they say.  Derek’s at least jammin’ some solo stuff now in the meantime while Trevino sorts out whatever it is that Trevino is sorting out…just keep in mind, he’s the captain of that team & if they’re ever gonna make a comeback…well…he knows what needs to happen.  Does it drive me absolutely nuts that “Walk Away” feels like it’s gonna be able to hold me over until whenever that is?  Actually, yes.  Damn near infuriating if I’m being honest.  You listen to a song like this, and even on a single spin through it you can hear what an authentic gift this guy has for making music & it kind of shrinks you down to the size of a kid like Oliver…practically begging, “please sir, can I have some more?”  No hyperbole here folks…Derek’s genuinely THAT good…to the point where part of me worries that he’s able to jam out an incredible song at pure will and whimsy…and that it might be part of what stops him.

This is all an extremely roundabout way of saying just how awesome it actually is to have him back, in case you’re not picking that up yet.  Some of you have likely tuned into the occasional episode of the SBS Podcast featuring Trevino over the years, and know just how much I’ve continued to play cuts from that ONE record.  The reality is, he’s got one of my favorite voices from out there in any corner of the independent scene, and he uses it as brilliantly as ever on “Walk Away” – the man is an incredible communicator of the many scrambled thoughts we share in the confusion of life & love, and the humble character he takes on in the qualities of his music (specifically) always reveals how grounded & down-to-earth he really is through the tone of his voice & how he sings.  What’s always made Derek better than the rest still remains equally true to this day – you can hear in the way that he sings, that he connects to the sincere emotion of the music & melody he’s rockin’ – and the man’s got an uncanny way of sending out the feelings he’s feelin’ straight through the microphone & amplifiers and right on over to all of us listening.  Think of it like his voice acting as another layer of instrumentation if you will…the music he’s got is always strong and is here once again on “Walk Away” – the vocals are too – but it’s the magic that comes from the combination that takes everything we hear coming outta this guy from good to great.  It’s because his connection to music is so immaculately inherent, that we can’t help but feel it – and within the realm of anything-Rock, fully sensory vibes like he’s capable of creating are incredibly rare.  Releford really doesn’t just write songs & sing’em – the dude creates an experience, every single time he steps up.

Whether it’s the bending of his guitar tones, or the twists of the melody as he sings it, Derek sounds as solid as he ever has on “Walk Away.”  He knows his sound, he knows his strengths, and he knows exactly how to get the most out of his music & songwriting…there might still be a few places that exist to evolve more in production, but we’d be talking about the tiniest of things at this point in his career – you’ll find you’ve got no problems turning “Walk Away” right up to the rafters, and jamming with the sensationally smooth hooks & addictive sound that radiates from every pore of your speakers when you do.  The depth in the dude’s writing is endlessly impressive…I’m talking overall between the music & the lyrics; I have my moments with the occasional rhyming-word here & there that ain’t my favorite but whatever – when it comes to the finished results in their entirety…I mean…ugh…I’m just so frickin’ happy to have more of this guy’s music that it’s hard to actually remain objective, you dig?  I keep typing sentences, hearing how outstanding the chorus hooks come out, get distracted from the point I’m trying to make, and just end up typing a mishmash of thoughts that’ll never do the music he creates enough justice.  Like, listen to the way he glides into the spot around the 3:10 mark will ya?  It’s like Derek can’t lose; he’s rocking with such insightfully organic sound that you can’t possibly resist his natural charisma & slow-burning emotional intensity.  “Walk Away” might rock in a gentler vibe than what you’ve experienced with his music in Trevino to a degree or two, but it’s not so much of a distant cousin that you wouldn’t recognize the sound of Releford’s style & songwriting… it’s purely awesome to have him back, and even better to have him back sounding this solid & like he’s never missed a single day in the studio.  And maybe he hasn’t for all I know!  What I do know is that we all tend to get caught up in life & what we do, and people like Derek that are lending their time & talents to the music-scene tend to put themselves at the back of the line.  I can tell ya from experience and I certainly can’t talk any justifiable shit to begin with – full disclosure, my own last record came out in 2014.  The only difference is, no one out there on earth needs another album from ME – but we do NEED another record & more music from Derek Releford.  Any time & every time he wants to pump out another tune, I’m always stoked to listen.

Find out more about Derek Releford & the many things he’s doin’ out there in the scene at the official links below!