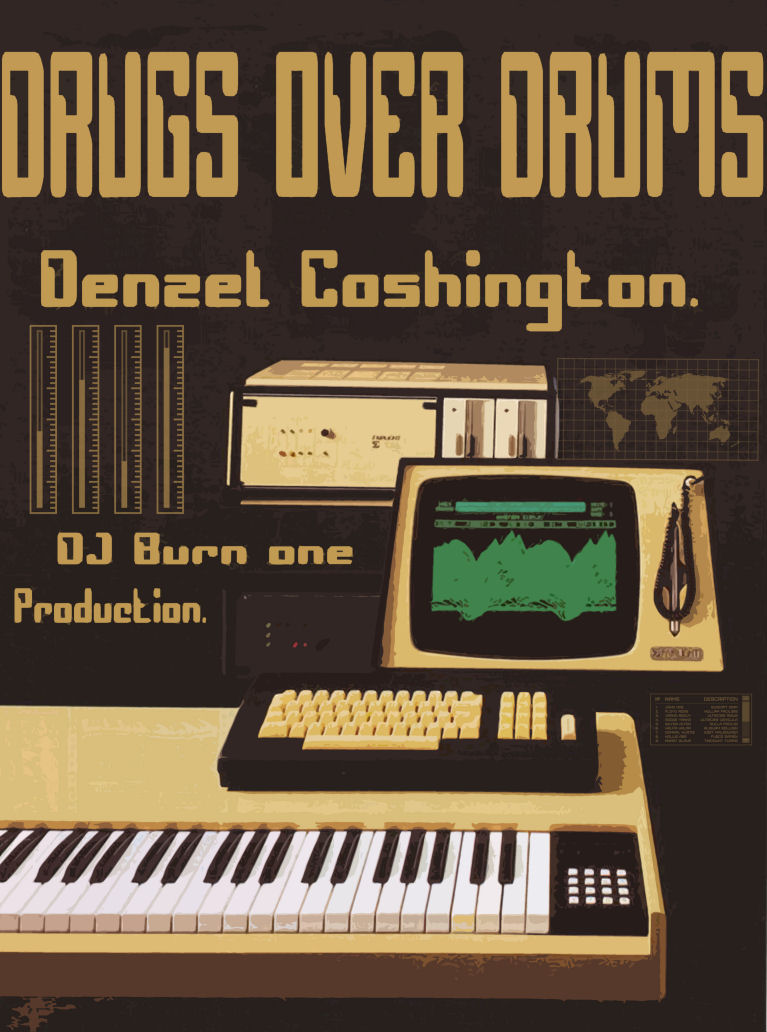 Now here’s a concept I’ve been able to relate to at many different points over my life. Drugs Over Drums…in fact…I’m positive I remember choosing this very direction myself at least a couple times already this year; but I’ve always had my heart set on being closer to Dave Grohl’s personality overall than ever hoping I’d get near his unbelievable skill on the drum-set. Drugs in general…I mean they’re all about availability & accessibility right? Living in British Columbia, Canada, aka ‘Vansterdam’ has its privileges in that respect for sure…and getting to puff another blunt is a much quicker way to at least convincing myself to even sit on the throne to drum it out…

And here we have another man, presumably younger than my old & gnomey self, who also seems to have chosen a similar path. Denzel Ca$hington lets all the evidence out into the court of public opinion on his latest mixtape – the Drugs Over Drums DemoTape. So let’s all help him celebrate this release of smoked-out tunes; I’m grabbing my bong and I recommend you do the same before we all push-play here. I just have the feeling that choosing drugs over this demo-tape real quick is something that will pay off for us all…I’m sure Ca$hington is feelin’ it! I don’t think he’d just approve; if he was anywhere close, smelt the smoke or heard the flick of a Bic – I’m sure he’d join us in a joint-effort right away.

Starting off with “Daily Flight” you gotta appreciate the metering that Denzel takes on in his rhymes packed full of lyrics and words left, right & center of your speakers. It’s an interesting opening with an old-school beat and eventually a super-low set of vocals taking over by the end of the track. It takes literally no time for the drug-references to come flying out towards you; the following cut/title-track is one of the best musical-landscapes I’ve heard in a long time. If anything…I might actually bring the music up a bit in the mix…I’m not trying to make Ca$hington slink away into the background, but he’s maybe just a little bit above the music on this mix as to where I’d set him myself. Listening to “Drugs Over Drums,” I’ve gotta hand it to the guy – this is a tremendous choice in beat and a real unique & innovative choice for something to rhyme over; I just want it louder…maybe I just need to turn it up…

As far as DC’s rhythm & flow are concerned, you’re definitely listening to an MC with a signature-style that you’ll be able to define clearly as Denzel Ca$hington any time you hear it in the future. Listen to “Higher Education,” and realize that this guy NEVER quits. Like, air & breathing – who needs that shit right Denzel? That’s just space where there could be more words.

Seriously though…I got love for a track that starts out with a bong-hit. These might be stoner-rhymes in subject, but in delivery they’re coming out exactly as Ca$hington has intended and performed perfectly. “Higher Education,” is a seriously in-depth song with some of the tightest words & lyrics you’ll hear in rap this year. It’s a thought-provoking rhyme that literally and audibly makes you question a few of the choices we’ve all made along the way as Ca$hington brings in his own perspective & insight on the music industry, personal-drive and life through his own experience. Again – I feel a kinship with my bong-smoking brother here…I completely agree with his opinion on working for yourself vs. working for anyone else; Denzel is right on the mark here in a song that really warrants several attentive listens to absorb the real hit of all these knowledge-bombs.

“It’s Going Down,” not only has a wicked reference to Boardwalk Empire, but it’s got a great old-school gangsta-beat that Dre would have put together back in the beginning days of the SN-double-O-P infused with an R&B vibe towards the end. It flows perfectly into “KLM Flow,” which has another jazzy beat & flow; Drugs Over Drums gets rhythmic & groovy here in the middle of this album. That being said…not too much has changed with Ca$hington himself; on one hand you’ve got a guy developing a signature-style, on the other hand many of the flows are similar to each other and delivered in a monotone sound that doesn’t often deviate or reveal the real hunger driving him to do all that he does. The lyrics are goddamn perfect, every time; you can’t fault this guy for getting all the words out cause he lets them all trip into mic on-beat & on-point every time.

And besides all that…lest we forget; Snoop Dogg made an entire career out of sounding a lot more stoned than Ca$hington reveals himself to be on Drugs Over Drums…so I’d say he’s in good shape to do just fine with his music and career based on that model.

“Lucid Dreams.” Alright Denzel – you’ve got me and I’m PISSED about it. I swear I know the smooth sample he’s got playing in the background…but I just mined the entire catalogue of The Submarines and I cannot find the song that he’s using. But I can’t be wrong…there’s an extremely outside chance of this being Nina Persson or The Cardigans somehow, but I refuse to believe it. What I think is much more likely…is that I’m missing an album in my folder for The Submarines…maybe they put out something new that I missed.

The point being is that this is a wicked sample; which is something even pointed out by DC as the track plays on. Another awesome opening here on this tune as the low-toned vocals singing lazily along in a half-stoned fashion to the beautiful vocals in the sample – man I love that lady’s voice! Denzel’s as great as ever on this song…but I think even he knows that’s a tough one to outshine the sample on.

Taking on the system in another really thought-provoking track, “Meritocracy” discusses the advantages & disadvantages of jumping into the j-o-b vs. selling drugs vs. freedom in general. And all before it even hits 4:20 – who says stoners can’t get it done? Ca$hington brings up the speed a bit to his flow on this track; it’s still completely his own style, but this particular cut also reveals a guy that can rhyme on several levels…again, another indication that every sound you’re hearing is coming out as intended.

“Early Morning Bus Rides” will make you wonder how many lengths of a pool that Ca$hington could swim underwater without needing to come up for air. With his rhythmic style – the lyrics and vocals often become as essential as the beat itself and largely become a part of the groove as any of these tracks play on. This particular song…I mean…if you’re out there and you CAN’T relate to this…then you’ve lived a better life than myself that’s for sure; anyone that has taken the bus early in the morning can relate to & respect where he’s coming from on this cut. I used to take about two-and-a-half HOURS worth of transit every morning and more than likely longer than that in the evening, and for about 2 years straight…without the BC-greens and my music up loud I don’t honestly know if I’d even BE here today.

Oddly enough, I think Denzel displays his versatility the most on “Point Of View Muzic,” but for the first time I’m a little at odds with the sample & beat. I’m not sure that the bass-synth-sound driving the main verse worked for me…and then the strings came in and that feeling subsided somewhat. It made the music a little more palatable but I dunno…I felt like this one was more serious in tone from the vocals than it was in the music and just didn’t find a combination that worked as well in comparison to the rest of the songs on Drugs Over Drums. And like I mentioned…I think that DC actually brings up the energy and tempo a lot on this song and really attacks the mic with an impressive performance; if not for him bringing it up to the top of his game I might have singled this one out a bit harder or picked on it more but he does such an incredible job on this rhyme that I couldn’t possibly. In a true case of carrying the music, DC makes it happen here on this second to last track “Point Of View Muzic.”

As the opening mere-SECONDS start out…I wouldn’t be doing what I do now if I couldn’t recognize such a familiar sample no matter HOW it sounds. Using a piece from “Where Is My Mind?” – Ca$hington winds this album up tight enough to smoke it slow-burning right to the end. It’s a dreamlike ending to Drugs Over Drums; I mean that literally…it’s like you’re floating off to sleep in those final moments of a smoked-out day and finally giving your lungs a break. Why this works so well as an ending is because Denzel actually brings that energy back to make the music with a hazy performance that matches the tone & style of the song perfectly. It’s atmospheric and widely spread out…just awesome to listen to as Ca$hington lays down this final rhyme to end his DemoTape.

Again I don’t know what more you could ask for than to have someone listen to your music and be 100% sure afterwards that they could pick you out of any given playlist without seeing a title or credit and just from hearing the songs. That’s truly the case here on Denzel Ca$hington’s Drugs Over Drums. I’m interested to hear how he’ll develop, evolve and change throughout the future to come…but I’m also convinced that we’ll always know when we’re hearing Denzel Ca$hington no matter how he does, or which direction he chooses to take his beats & rhymes.

Have a listen for yourself right here: https://soundcloud.com/denzelcashington