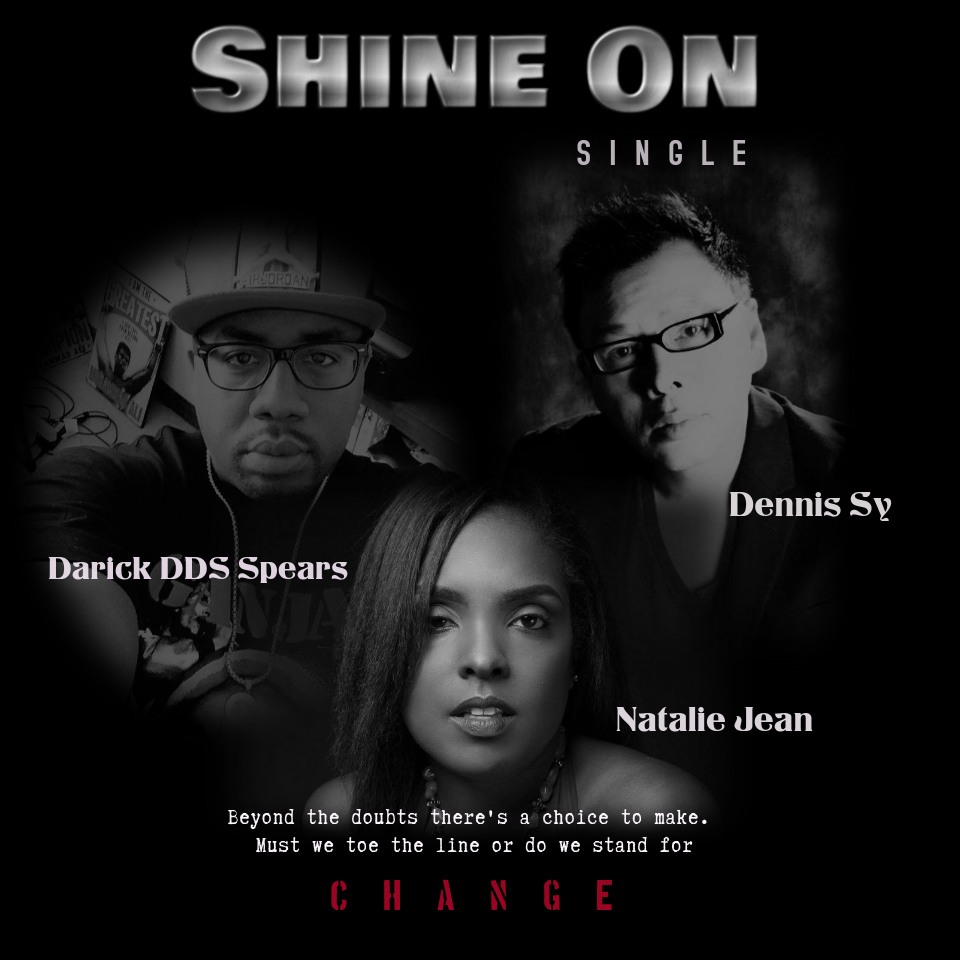 It’d be hard not to appreciate the passionate power of enthusiasm in the pop-melody of “Shine On” – it certainly radiates an inspiring amount of positivity in its combination of message and music.  Enlisting some excellent assistance to bring his vision to fruition, singer/songwriter Dennis Sy has the support of singer Natalie Jean & the hip-hop vocals of Darick DDS Spears appearing on “Shine On” – and together these three have made a song that is pretty much guaranteed to stick in your head for weeks on end.

It’s also definitely worth mentioning, that “Shine On” is being considered for the 59th annual Recording Academy Awards…that’ll give you a solid indication of the level of songwriting you’ll find in the composition of this new single…it’s top-shelf stuff for sure.  When you hear the hooks of “Shine On” you’ll know exactly what I’m talking about; it really is the kind of melody that never leaves you once you’ve heard it…highly memorable and completely catchy.

Musically I thought the song was bang-on the entire way through…”Shine On” is delivered with a high-level of execution and professionalism while still being informative and fun all at the same time.  I had a few slight issues with the vocals of Sy as I adjusted to his sound/style at the very beginning of when he takes the verse, but I felt like he really warmed-up throughout the song and consistently raised his performance up from the first moments onward.  Spears sounds spectacular and lends some incredible energy to this entire song with multiple-parts that are delivered right on the money with precision-timing and real passion in his tone.  Natalie Jean remains in the background for the most-part, but sounds solid every time you hear her…and the combined sound of the vocalists together in the chorus nail a tough part to sing with real heart and emotion.  These three definitely sound great when they’re right there together with each other in the chorus…a real collaborative effort that really works well.

What I do really believe…is that songwriting remains the star of this song from beginning to end.  As strong as the performances are – it’s impossible to deny that lyrically, musically and creatively this is all a part of one really great idea overall…”Shine On” is truly solid song and bulletproof in its structure, composition and twists and turns in the music’s writing.  Between the uplifting messages of change in the lyrics and the brightness of the execution…you really can’t help but find a part of you that ends up connecting to this super-shiny pop rhythm.

Musically-speaking, I can certainly understand the positive support this song is already receiving online – the drums, bass, piano, guitars…it all works so incredibly well together that it’d be impossible to ignore.  You can feel the magic of the moment on “Shine On” and how it builds and evolves as the bright-energy, positive-vibes and inspiring lyrics grow and expand as the song plays.  The sentiment is certainly a beautiful one…clearly these are three people united in their belief of a better tomorrow.  “Shine On” has a decided point of view…it’s certainly a sunny one, but that’s a tone, texture and atmosphere people truly do appreciate beaming through their stereos.  The potential audience for “Shine On” is widespread and the opportunities that exist for a song like this to be featured in numerous parts of the music-industry from commercial awareness-ads to soundtracks are pretty much potentially limitless.  There’s a reason that strong writing and inspired sounds like this get considered for awards – they’ve done a great job here and all three of these vocalists take a turn shining beautifully in the spotlight and glowing warmth of one of the friendliest and most-inviting songs you’ll hear this year.

Find out more about Dennis Sy and his music through the official site at:  http://dsymusic.com