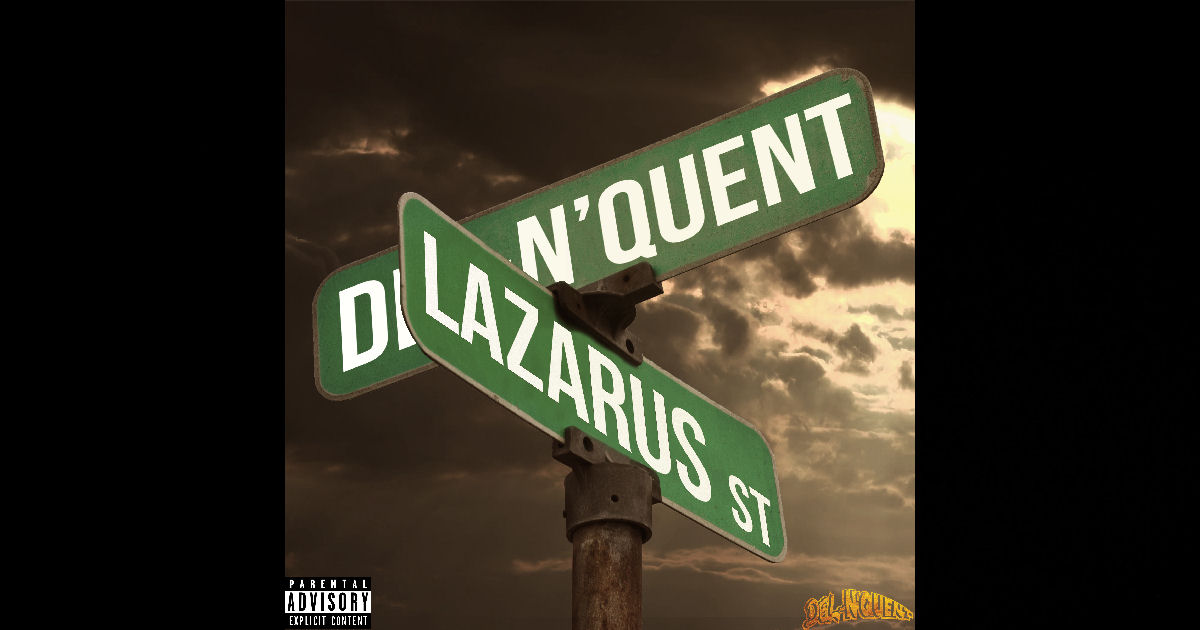 HOT jams from Del-N’quent on his latest record called The Ascension Of Lazarus Street – dude’s got it all stocked & loaded with entertainment throughout the set-list, which I’ve been checking out over this past week or so.  I’ve got three cuts cherry-picked out for ya to give you an idea of what you’ll find on the new album from Del-N’quent – this emcee makes moves that make an impact on ya, no doubt.

With the flick of a lighter, he shifts into the extremely badass beat & music that comes along with “As Hell Slowly Heats,” coming out large and in-charge.  Del-N’quent instantly puts finesse, swagger, and precision on display, pivoting & shifting through a complex sea of words strung together with an ease that seems to come incredibly naturally to this emcee.  Ain’t much not to love here really – “As Hell Slowly Heats” rocks a wildly innovative sound from beginning to end, staying highly enticing to the ears right from moment one until it’s all over.  As for the main man on the m-i-c, Del-N’quent proves he’s here to compete for the spots on your playlists out there with confident rhymes that are spit with the right energy to fully suit this vibe.  Clearly focused, determined to deliver serious Hip-Hop entertainment and rhymes that move with stylistic integrity & complex composition – credit to Del-N’quent for making this all flow as smoothly as it does – “As Hell Slowly Heats” already proves he’s got those good-good skills you’re looking for in an emcee, stepping up to flex an inventive flow on an overall gripping track.

With a second flick of his lighter, we go sliding right into the immaculate bounce of the neon-vibes in the low-end infused sound of “Inferno” – and believe me when I say, this is the kind of cut you wanna be sending out around the internet to promoters & reviewers & all-that…it fully makes sense that this single-worthy cut ended up on these playlists of ours here.  Give some real credit to the man here, because Del-N’quent is making really smart choices all-around…the beats he’s choosing to work with are supremely entertaining – but to do’em justice meant he had to bring it with equal strength & really rise up to the challenge, which he’s definitely pulled off on tracks like “As Hell Slowly Heats” and “Inferno.”  Like I was saying from the get-go, this is HOT stuff – from the music to the microphone, even to the fact that “Inferno” is one of only two tracks you’ll find on the record without an ‘explicit’ sign tagged to it – Del-N’quent serves up an all-access cut that hits the mark for its vibrant bounce and impressive hooks.  You knew the man could rap already by this point – it’s tracks like “Inferno” that go on to show what a multi-threat he really is on the mic…the chorus he’s created for this joint is designed to catch your attention & the P-H-A-T bass-lines you’ll find on this cut are guaranteed to get your body movin.’

The eerie opening to “Fallen Mindz” creeps in to haunt your bones, brilliantly bringin’ in the low-end, working in killer doses of distorted piano keys and twisted melody to the surface of this track from what sounds like six-feet under.  The amount of texture on this cut is 100% rad – you feel like you can reach out and touch this track…or perhaps even stranger, it feels like it could reach out and touch YOU.  Putting the right punch & emphasis into the words, Del-N’quent kicks it with an old-school flair that shows respect for the real roots of Hip-Hop/Rap by keeping his rhymes sharp, informative & thought-provoking as they are entertaining.  Like I mentioned at the beginning, you’ll find many tracks on The Ascension Of Lazarus Street that’ll prove Del-N’quent is ready to bring it to 2019 – but you gotta hand it to the man or whoever’s in-charge of selecting these singles from the album to be checked out by us reviewers & critics out there.  Each cut shows some of the best of what Del-N’quent has to offer ya – and in the case of tracks like “Fallen Mindz,” he even takes a moment to shine the spotlight on a fellow homeboy, introducing us to rapper Hermes on the second set of bars on this final cut in review.  Talent attracts talent, as we always like to say here – and the fact that Hermes maintains the high-caliber standards that Del-N’quent has set so far, deserves a shout-out of its own.  They make sense being featured in this collaboration together – both of these emcees bring a similar style, vibe, and approach to the bars, resulting in a flawless passing of the mic that gives this record another dimension in sound.

You know what to do homies – go check this record out at Spotify and see what else you’ll find on Del-N’quent’s The Ascension Of Lazarus – find it here at his official page:  https://open.spotify.com/artist/0apNNpcubgrGMEjZThX2yY