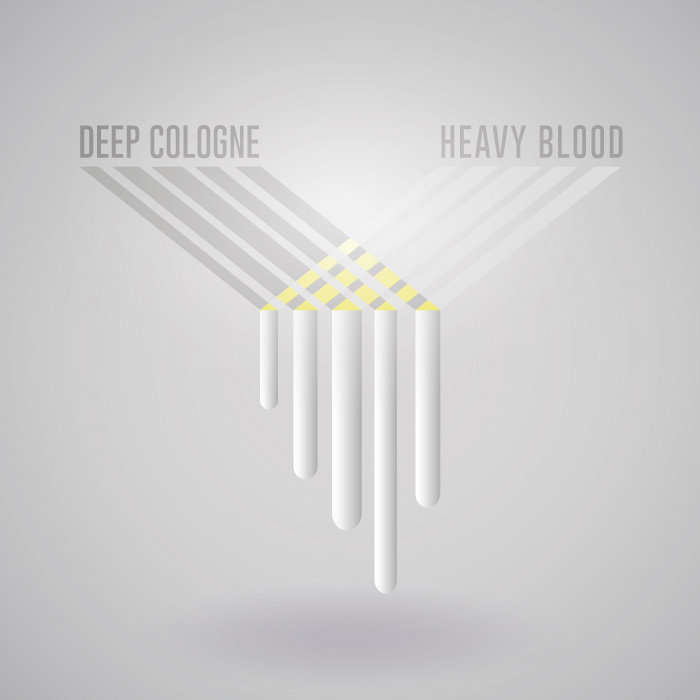 Heavy Blood instantly begins with a sound I connected to. As Deep Cologne began the album with “Flawless” I could hear that texture, atmosphere and emotional-tone that I tend to love in the subtle electronics of bands/artists like Styrofoam, Faded Paper Figures…maybe even a little of The Postal Service in there. Vocally…it began a little more distant before they found their way into the mix at a confident level…more similar to bands like Band Of Horses, The Virgins or The Temper Trap where the sounds you’ll hear build steadily and the vocals tend to come drifting in stronger and with more presence as the songs and albums play on. Deep Cologne has moments where the sounds will remind you of other similar acts in terms of the genre & style of the writing…but in truth – the tones and approach that Roger Lloyd, the one-man army behind the melodies in music has taken on Heavy Blood, have really put a claim on an atmospheric area of the genre he can call his own for sure. “Flawless” has that rubbery, playful, sincere-sound to it that immediately calls out for you to listen to the rest to follow.

The Bandcamp page mentions that Roger was once a member of Sweet Secrets…the Facebook page for Deep Cologne has ‘musical project where Roger gets to do everything’ in the short description…which kind of leads you to believe there might have been some static in his last project where he came to learn and discover control over his own sound/destiny was more up to him than it would be anyone else. “Suitcase” might deal with that…it’s hard to say…but that could very well be about making that separation and heading onwards towards your own fate, choices…life. Rhythmically-sharp in its low-end, “Suitcase” also makes extraordinary use of backing vocals which really take a turn in the spotlight towards the middle of this track. Not sure which of them it would be…but shout outs to them all; Amber Grounds, Piper Deardorf and Jamie Dieveney…they really add to the sound of Deep Cologne in a necessary way and help fill in the atmosphere of these ideas with all kinds of smart writing for their assistance playing to their strengths in these songs.

I could…and more than likely WILL…listen to “One Note Song” for the rest of my damn life. This outstandingly stunning melody is absolutely derived from music set in the 50’s/60’s – cleverly disguised here in this modern-day groove that Deep Cologne has put together. The…whadda they call that…’Bossa Nova’ style rhythm that nearly sounds like it’s straight off your grandma’s old organ that she rocks every Christmas…for some reason, it works extraordinarily well with what Roger has come up with for his vocal-flow and melody. The result is a song that absolutely sparkles with its sweetness, intent, lyrics and performance…”One Note Song” is a gorgeous effort and a real highlight early on into the Heavy Blood record.

Here we go…here’s where you can bust Roger on a couple of influences on him and his music that have got to be real ones; after listening to “The Longing,” you’d have to assume that Roger is still, or has been a big fan of The Killers and Panic At The Disco! at one point in time or another. Structure-wise…definitely resembles the way that Brandon Flowers tends to go after his rhythms/anthems…great bass build-ups and drumbeats fuel a fantastic canvas for him to sing to, which sounds more along the lines of Brendon Urie from PATD! – nothing wrong with either of these two styles combining to make the inviting groove of “The Longing” come together as solidly as it does. Stripping back the energy and increasing the melody & emotion for the album’s title-track, “Heavy Blood” – a cleverly written tune that almost sounds like it’s just on the edge of being a U2 song…which of course without, The Killers would never exist…it all seems to make logical sense to me the more that all these sounds, dynamics, influences and writing twist together to make the music of Deep Cologne come out sounding like the unique music it truly is. You can cite influences, sounds-likes and comparisons all day long, but the overall result of these sounds blending together through Roger’s perspective allow for this to become his own whole deal. “Flood” is a great example of how you’ll hear him break out with a more soulful, performance-inspired composition as the album begins to transform and switch into a different creative gear. “Flood” opens the door for Roger to let a little more of himself into the music and the vocals; he’s been solidly expressive and confident throughout already – but “Flood” and the following “Fresh Cut Flowers” sound more like the kind of songs where you do that whole thing where the singer starts heading out to the very front of the stage, shaking hands of the million screaming fans…you know the thing I’m talking about…it sounds like that. “Fresh Cut Flowers” possesses a Beck-like genius to its production and structure…the performances are once again completely solid with the backup vocals firmly adding to the manic-meets-melodic groove on one of this album’s middle tunes.

After a brief excursion into “Undermission,” which serves as the atmospheric-break in the album; it also allows you to you get ready to brace yourself for the bright, energetic rhythm of the bass-groove in “Diamonds.” If these rhythms weren’t working so favourably for Deep Cologne I would be a lot more careful and cautious about the old-school organ-melody thing I mentioned earlier on in talking about “One Note Song” – it’s still something Roger will want to be mindful of…but for the most part, everything he’s added to these styles of rhythm he chooses add more than enough to keep it sounding updated, fresh and unique to right now. What I really like personally is that I find a lot of what Deep Cologne is doing is right on the fringe of a lot of what makes up the mainstream and independent music-scene these days…like the next step in the evolution of sound to come in a sense.

Because I hear a song like “Blossom” and can definitely recognize the potential of Deep Cologne’s song-writing and execution. The immaculate production in the music and outpouring of emotion laced into the lyrics and vocals of “Blossom” is nothing short of powerfully-stunning. For me…”Blossom” might be the tune that I felt best represented the overall intent and creative potential of Deep Cologne in its most audibly-realized form. Fantastic dimensions and depth to this song…Roger gives a perfect performance through the vocals and pulls you into “Blossom” with a melodic, rhythmic & stylistic performance in the verse before adding that extra layer of connection and strength to the empowering chorus. The low-end swell and synth sounds of this track swirl together perfectly around the subtle addition of electro hi-hats and strings…it’s a gorgeous tune and Roger delivers one of his biggest gems right here on “Blossom” in the later-stages of Heavy Blood.

He’ll go on to nearly resemble David Bowie in the verse throughout “Brave Song” before hitting a more melodic-stride into the song’s chorus. Great ideas in this versatile song…they also reflect Roger’s clear love of music from its earlier history but really take those ideas to a new & beautiful place through the Deep Cologne treatment. This final set of three between the focus displayed on “Blossom,” “Brave Song” and the final tune “Sugar” is a massively pop-tinged ending that fits perfectly to what’s been a solid adventure the entire way through Heavy Blood. “Sugar,” is probably the most expressive that we’ve heard Roger through the vocals throughout the album so far…not sure if it’s the “Sugar” amp’ing him up that extra 10% or what it is, but the brightness in the rhythm of this final tune is like an audible-guarantee to pull you in and make you a fan if you somehow weren’t convinced already throughout the impressive Heavy Blood record. “Sugar” with its passionate performance and stylistic-vocals leading the way & adding real charm & charisma to the album’s final track – Deep Cologne ends the album on the most energetic and uplifting-attitude on the new album, making you instantly want to repeat the entire experience all over again – and you should!