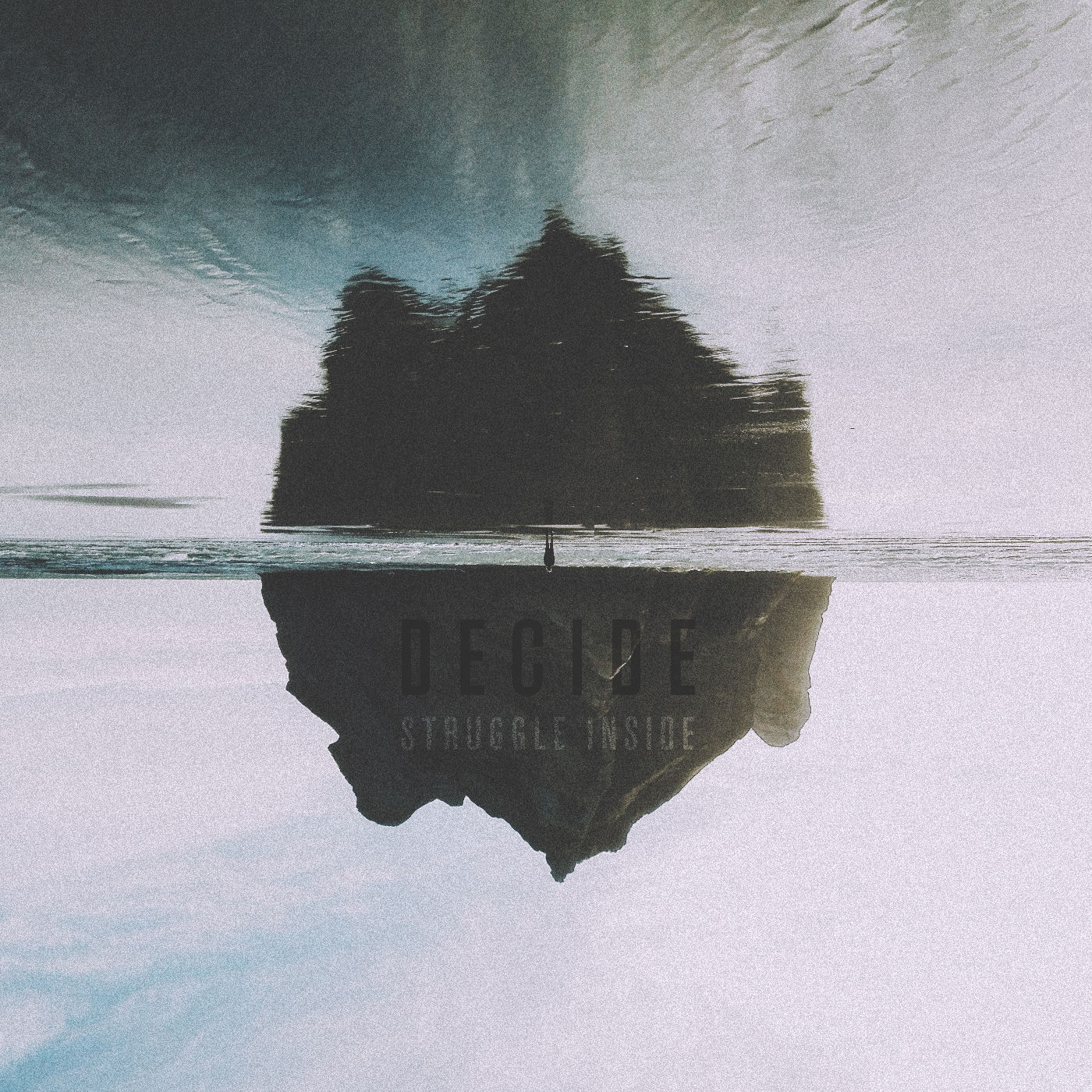 The skill-level is completely professional and the production & writing of Struggle Inside deserves a lot of credit for being as tight as it is.  It’s been a thoroughly great year for independent hip-hop/rap-music – and you can consider Decide to definitely be a solid-contributor to the reasons why that is.  “Rap Shit” starts out the EP larger than life with a seriously confident burst of lyricism that opens-up the session quickly with precision, incredible flow and metering that sticks right to the beat and remains on-point.  Great bounce & snap to this beat, solid chorus that’s got the old-school Dre-style piano-melody kickin’ it – and overall, “Rap Shit” sets the bar high for what’s to follow with its stellar production and performance all firing-off with intensity, passion and impressive lyricism right from the first moments in the experience with Decide’s Struggle Inside.

“Stronger In The Rain” has Decide continuing his own verbal-gymnastics against another stunning set of samples & beats, alongside the assistance of G.J.F.  I like personalized internal-dialogue style that the writing takes on in the opening-verse…I like how the lyrics are incredibly clear but incredibly complex at the same time – you can hear the effort that has been taken to get every syllable to find a perfect place.  Decide has a massively impressive skillset that really keep these flows sounding natural as they come out…they no doubt took a while to write and perfect – but the result speaks for itself and songs like “Stronger In The Rain” come out sounding spectacular.  Again…assuming that’s G.J.F. in the hook there…that also sounds tight…it’s strong and well-sung…definitely adds to the overall drama and mood of the song.  Absolutely the kind of emotion in a hip-hop song that really speaks to people and great build-up and development of the tension in the track – but no matter how impressive the music might get – the words remain the star of Decide’s music.

That being said…the energy in the mood & atmospheres Decide is working with are also absolutely top notch.  Using a twinkling dramatic melody-line on piano to drive the music of “Moment Of Silence” amongst some deadly sounds from the synth & low-end woven into its fabric and alongside the angelic notes & tones from the vocal-hook provided by Emilia Tollbom Lindh.  Decide’s done really well in choosing where to present his talent from…not only do I think the music has been excellent throughout this EP so far, but it’s also clearly well-produced and about as professional as you could hope to stumble across out there in the independent music-scene in any genre.  “Moment Of Silence” is a little looser in its hooks and structure; the verse absolutely pops with the signature blazing-speed, energy and precision of Decide…the chorus takes the energy backwards a bit, but still sounds spectacular.  Honestly one of my favorites from the EP even with that being the case – “Moment Of Silence” also seems to be a little more personal and I think you can hear that connection to the song in this recording.  Felt very much the same way towards “Illusion Of Choice” which I thought was the emotional highlight of this record.  Inspired, thought-provoking and pensive…”Illusion Of Choice” reflects heavily on love and the choices we make in pursuit of it all.  Written from an intensely personal perspective – Decide does his best work when really putting himself right into the music and lyrics like this.  Once again using a seriously big low-end beat against lighter-sounds in the sample – this time in string-form – the contrast of light & dark is something that also works really well in Decide’s favor.

I mean…if you ask me…the guy is making all the right moves here on these five-tracks…just sayin’!

The bump & thump of the jazz-influenced rump-shaker that ends the Struggle Inside – “The Powerless” hits one last homerun for Decide after all this time he’s spent loading up the bases and waiting for a grand-slam to settle the score once & for all.  I think it’s safe to call the game at this point…it’s a solid 5-0 win for Decide as far as the Struggle Inside EP is concerned.  Dude approaches this final-cut with real style and puts his microphone-skills on display one last time on “The Powerless.”  The beat is big, bouncy and HUGE in the low-end pulse…love the nod to the old-school with the record-scratches in the mix and the chorus-style vocals that line the background of this track are highly effective in creating a rich atmosphere.  Decide almost sounds like Mickey Avalon off the sauce on “The Powerless” – he still has that smartass tone to his vocals like he’s in on an inside joke like MA does, but with the added focus and confidence that Mickey’s never put down the bottle to pursue.  Decide sounds extremely sharp as he bounces, pivots and plays with the beat in “The Powerless” – all the while dropping knowledge-bombs of relatable & empowering words that I think will connect with the people out there.

Overall…solid job on the Struggle Inside – from performance to production, to writing and skill – Decide seems ready to make it happen and take it all to the next-level.  After everything I’ve heard on this EP…I can’t imagine too much stopping him or getting in his way; he’s got the determination, he’s got the beats and he’s definitely got the rhymes…and with the consistency of quality in these five tunes from Decide, I’d expect that anything you’ll hear from this hip-hop artist in the future would cut the mustard.  This homie does great work.

Have a listen for yourself at the Decide Spotify page here:  https://play.spotify.com/album/0DnC5dTDodM2jehBlPIjnf