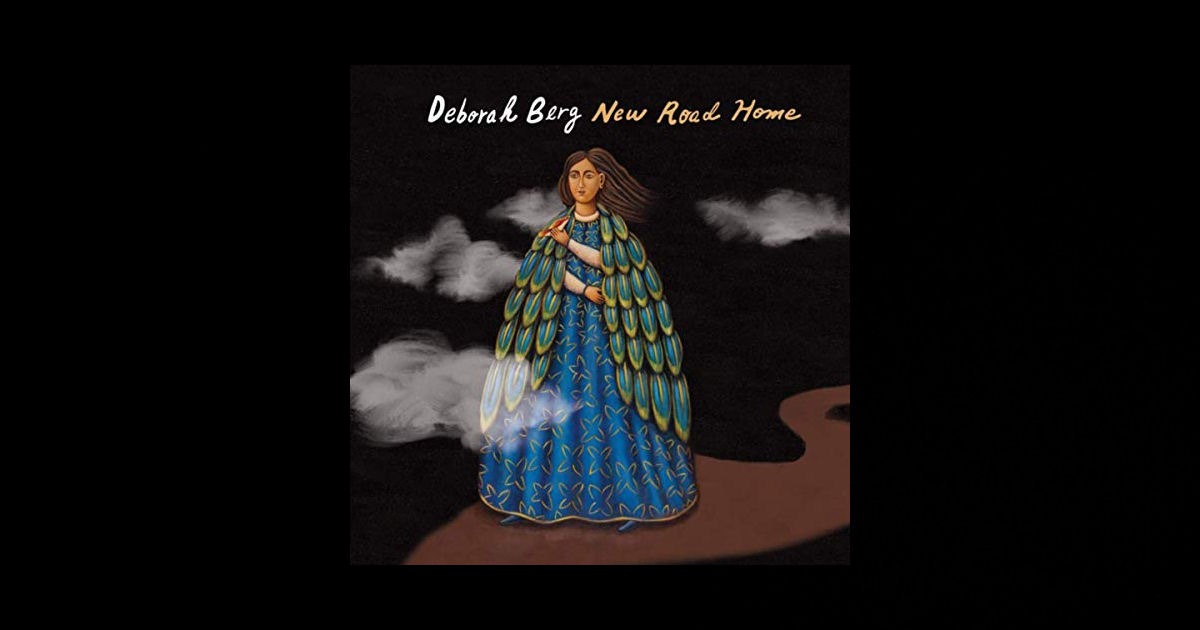 This much I can tell ya…you don’t end up being endorsed by Martin Guitars and the almighty Sennheiser without seriously knowing what you’re doing as a musician and having some incredible chops.  Deborah Berg definitely has all the right talent, skills, and stunning songwriting to go along with the well-placed faith these giants of the technical-side of the industry have placed in her – she’s pretty much amazing.  There’s all kinds of history & music in her career already…I don’t want to put too much of a timeline all this, but she’s about a year shy of being a musician for as long as I’ve personally been around here on earth…but the facts are, when we’re talking about the sound of her music, she’s as young & spirited as the day she started I’d reckon.  Everything I’ve personally heard from this sample of her New Road Home album has continuously revealed a beautiful soul that radiates music from her every pore – always has apparently, and I’d say it’s safe to say, Deborah always will.  Incidentally, she also spends a great deal of her time teaching the new generation of artists out there as well…and for you budding singer/songwriters out there…you might be making a real smart choice in seeing if you can book a lesson or two with this wonderful gem of the music-scene.  From the wisdom in her voice & tireless spark of energy within her music, I suspect we could all learn a few things from Deborah Berg’s experiences.

So here’s where I’m at with these tunes…because of course there’s no hiding that the Country/Bluegrass thang can be…challenging for me…that’s probably the best way to phrase that.  I stand by what I’ve always said from day one in creating this site however – and that’s that if you make your music with true passion, focus, and commitment, there’s no stopping me from listening to anything from any genre.  Like most listeners out there, whether it’s factored into the music-making or not, in the end results, we all just want to hear that the music you’re making matters to YOU just as much as it could potentially to us.  And then of course, you know, the like, less obvious all that is in the final product, the better…that is, if you’re faking it til’ ya make it.   For artists like Deborah, the natural beauty & smoothness in the fluid flow & charming melodies you’ll hear are discovered through genuine interest & a love of the craft.  That organic nature of her sound/style give her all kinds of crossover opportunities…the chance to break through to people like myself that were raised on Grunge music – or YOU, no matter who you are or what you normally listen to.  The inherent sweetness you’ll find in Deborah’s music makes her so much more universally accessible than any genre or label could possibly describe her as – I dig this fine lady.

As far as my ears are concerned, she’s done really well here…I’ve got three tunes, two of which I like quite a lot, and one of which I’m completely in love with…that’s a solid batting average to say the least!  I started with a song called “You’re Gone,” which is currently featured fairly prominently out there in the online world…so I’m thinking that’s what Berg has gone with as the official lead-single.  Could be “Sliver Of A Moon” as well…they’ve both got official videos out there already, but I have the feeling that the vibrant storytelling, sound, and incredible details she’s got in her lyrics on “You’re Gone” would make it the more likely candidate to bring the people in to listen.  She’s backed-up by a whole crew of ace talents to help bring her music to life – and they literally ALL deserve a huge shout-out, because this music is flawless, 100%.  So to do that, I’ve shamelessly lifted these following credits directly right from Deborah’s main website – her band on New Road Home consists of these amazing players:  Charlie Giordano (accordion and keys), Richard Hammond (upright bass), Chris Tedesco (violin), Hugh Pool (vocals and dobro), Sherryl Marshall and Stephanie Seymour (backing vocals), Monica Passin (guitar), Ethan Eubanks (drums), and Rich Hinman (electric and acoustic guitar).  Lots of crossover sound at work here between what they’ve all combined to create – I could see fans of Country, Soul, Blues, Bluegrass, true R&B, Indie, and Folk fans of all kinds making time to check out a track like “You’re Gone.”  Chris Tedesco in particular stands out to me when it comes to the music, I felt like the violin was absolutely essential to this highly interesting rhythm & groove on “You’re Gone.”  As far as the vocals go – Deborah immediately proves herself to belong in the spotlight where she’s been for so many years – there’s not a single thing I’d change about the way she sings this song, she’s got all the right moves to make this work.

Anyhow.  Clearly a good start, yes?  Well hang on then…cause in my opinion, things kept getting better.  Ultimately for my own personal preferences, I probably dig “You’re Gone” just a bit more than the following track I heard called “Muddy Weather” – BUT – I’d be willing to bet this second track would appeal to an even greater number of people overall.  The pure SMILE that this song on my face is indescribable – if you looked up the definition of ‘charming sound’ – there’s a solid chance you’d find a link to this tune.  “Muddy Weather” makes incredible use of its space – listen to the music being played; I mean it, please.  I could cite what I love about it all, and we’d happily all be here all day long reading about it, because it’s everything!  For real, the way each layer interacts, responds, bounces off of, and plays with each other, is 100% awesome…it’s the kind of musicianship & instrumentation you’ll truly only find on a really competent record all-around.  These are players that clearly trust each other & rightly so – the real magic is the fact that you can hear that confidence translate right into the vibes of the music being made on this record, it makes all the difference in the world when we listen to it.  There’s a genuinely comforting vibe that runs blissfully through the atmosphere created on “Muddy Weather” – the song itself might question life & love, but the music surrounding the theme is endlessly inviting.  PLUS…c’mon people, when was the last time you remember hearing an accordion solo?  Probably been a while right?  Now how about this question – when was the last time you remember loving one?  Even longer?  Maybe never?  Have a listen to a tune where the accordion completely fits right in – Charlie does an exceptional job of warming up the friendly sounds of this song.  It’s quaint, it’s pleasant…all on the surface…when you listen closely to the lyrics, it’ll run much deeper for ya – it’s a wonderful example of contrast & smart songwriting that allows you to listen to tracks like “Muddy Weather” over & over and continually get more out of each experience.  As for the star of the show, she remains the star at all times…as fantastic as any of these contributions to the music may be and indeed they ARE – you really can’t take your ears off of Deborah, she’s truly got a golden voice and never seems to take one step out of place – she’s audible perfection and incredibly well-suited to her style of music.

Both “You’re Gone” and “Muddy Weather” provided my speakers with good tunes & good times – but what I found in “Full Circle” was where I felt Deborah & her surrounding crew of ace-talent were shining the most brightly & beautifully inside of a much more subtle & slow melody.  I’ll admit there’s something of a “Knocking On Heaven’s Door” feeling that flows through the air of the verses on this song…different tunes for sure, but a similar heaviness to the emotions adrift in the atmosphere as it begins.  “Full Circle” goes on to reveal a gorgeous set of ambitions, sentiment, and intentions with its chorus, becoming a song about unity, love, and togetherness…how these journeys we’re all on lead us “Full Circle” and how our past experiences stack up over time to help guide our future.  Keyboards play a huge role, as does the violin once again…spectacular job from both, and the upright bass from Richard as well…musically, again, you’re not going to find any cracks or faults here, but you will find plenty of compelling & captivating sound coming at ya…and the whole band involved deserves real credit for that.  Deborah Berg has chosen exceptionally well with the talent surrounding her – and the same is true vice-versa – she’s such a magnetic personality and poetic lyricist that you really want to listen to every word she sings.  “Full Circle” has additional advantages that the other tracks don’t quite have in the sense that, it’s probably a little less Country/Bluegrass and more of either a Acoustic-Ballad or Indie-Folk tune; six or one half-dozen of the other – whatever way you want to describe it, a song like this could easily fit on playlists with the likes of Mazzy Star all the way through to R.E.M. – and that’s great company to be keeping.  Gives her a crack at the Alternative crowd…and I’d be willing to bet they’d like what they find in Deborah just as much as I have…her sincerity absolutely shines through her music, through her words, through her vocals – and in my opinion, you get the most heartfelt example of how that authenticity works in her favor on “Full Circle” for sure.  Definitely three solid reasons to be checking out the rest of New Road Home…Deborah’s got my enthusiastic vote of support & I’m confident she’ll earn yours too.

Find out more from Deborah Berg’s official homepage at:  http://www.deborahberg.com